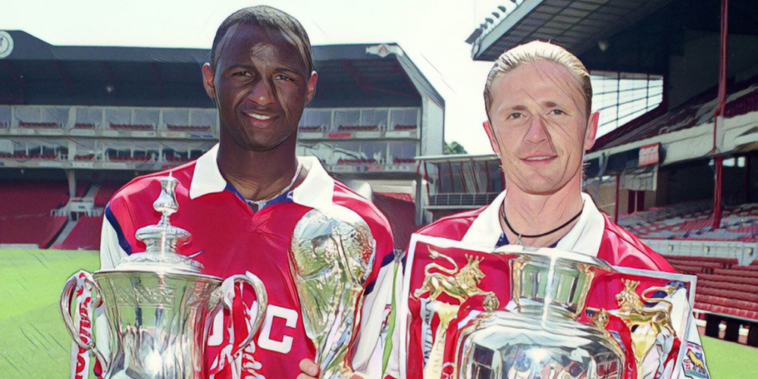 Successful football sides are forged on partnerships, the vital cogs that work cohesively together for the greater good of fully functioning machine. It can be argued that midfield is perhaps the most pivotal component, the centre of the pitch commonly referred to as the engine room.

The engine room, of course, houses the crucial power and its importance is infinite, both in terms of mechanical engineering and metaphorically when discussing the best teams in football history.

For an emerging Arsenal side of the late nineties, their midfield blend of power, poise, and dynamic drive laid the foundations for an unforgettable era in north London.

Arsenal had made a mixed start to the early Premier League era when the winds of change swept across the capital. George Graham’s successful reign ended abruptly, before the appointment of Bruce Rioch proved an underwhelming tenure.

In search of a new direction in the increasingly cosmopolitan landscape of English football, the Gunners’ hierarchy decided on the appointment of Arsene Wenger – a left-field appointment of a little known Frenchman who had previously been coaching in Japan.

In the month prior to Wenger’s appointment, the north Londoners had secured the signings of midfield duo Remi Garde and Patrick Vieira, the French duo arriving on the recommendation of the man about to take the coaching reins at Highbury.

The latter had struggled during a single season at AC Milan, failing to establish himself amongst a host of senior options at the San Siro. In search of regular opportunities to avoid his promising career stagnating, he signed for Arsenal in a deal worth £3.5m.

It proved inspired business for the Gunners.

From the fledgling performances of Vieira’s career with the club it became apparent Arsenal had unearthed a star, the 20-year-old’s long-legged stride eating up the turf as he crashed into tackles and burst beyond opposition challenges.

Whilst modern football has evolved to the point where midfielders are often attributed specific roles, Vieira was a footballer capable of it all. Far from a jack of all trades, however, he was a master of many.

Forward-thinking and combining both technique and tenacity, his arrival instantly changed the dynamic of the Arsenal midfield, with Wenger’s side struggling during the Christmas period of 1996/97 with their influential new signing suspended.

Having seen his side narrowly miss out on Champions League football on goal difference, Wenger sought the signing of a partner for Vieira, raiding his former side Monaco to sign Emmanuel Petit.

Petit has spent much of his time in France at left-back, but it was in midfield where the pony-tailed Frenchman cemented himself as one of Europe’s finest.

Indefatigable, aggressive, and with an elegant poise often associated with left-footed footballers, he was the idealistic accomplice to the box-to-box brilliance of Vieira.

Together in tandem the two drove Arsenal towards success, a pairing of ferocious competitiveness which brought bite ahead of the iconic backline Wenger had inherited from his managerial predecessors

Their first season together saw the Gunners emerge as England’s new footballing force, as Wenger’s shrewd signings from the continent and innovative sports science methods threatened Manchester United’s status as the division’s dominant side.

Arsenal had trailed the reigning champions in the title race by a significant distance following the Christmas Period, with some bookmakers paying out on another title heading to Old Trafford.

United were 12 points clear at the top of the division in March, though Wenger’s side possessed three games in hand and also had to visit Manchester in the run-in.

Marc Overmars’ late winner at Old Trafford proved the second of 12 consecutive wins for Arsenal, who powered down the straight to claim a first Premier League title.

At the centre of their success was the dovetailing duo of Vieira and Petit, the latter named as the division’s Player of the Month for April following a series of stand-out performances for the Gunners.

20 years ago, @Arsenal signed Emmanuel Petit who had a 🔝 debut season 🏆🏆#OnThisDay pic.twitter.com/aZJ4i1qQa7

The latter on occasion was a one-man stampede. Steely-eyed and with vapor-rub smeared across the chest of his Nike shirt, he was capable of breaking teams apart with either the power of his running of finesse of his passing range.

Strong and powerful – both in mind and matter – their partnership proved the combative conduit between Arsenal’s defence and forward threat, their successful season resulting in a domestic double as Newcastle were beaten 2-0 in the FA Cup final at Wembley.

Established as the Premier League’s best midfield partnership, their qualities then combined on the international stage as France won the 1998 World Cup on home soil.

Petit starred in a more prominent role than Vieira and started the final win over Brazil in Paris, scoring Les Bleus’ third on the break. The assist came fittingly from his Arsenal teammate, with Vieira – on as a substitute at the Stade de France – rolling the ball into Petit’s path to put the finishing touch on France’s triumph.

The following season saw the axis of Petit and Vieira continue to dominate games for Arsenal, though the Gunners were unable to replicate their previous season’s achievements as Manchester United’s treble-winning side pipped the north Londoners to league and cup success.

“A monster, his (Vieira) partnership with Emmanuel Petit was as good as anything we have seen. His performance against Liverpool in the 2001 FA Cup final stands out. He was magnificent and didn’t deserve to be on the losing side.

“In the dressing room afterwards, everyone kept saying: ‘how good was Vieira?’ Steven Gerrard still talks about that game as Vieira made him realise he had to climb a few more levels to reach the top.”

It marked the beginning of the end for the pair as a partnership, as Petit departed in 2000 to sign for Barcelona, but spent just a single disappointing season at the Camp Nou before returning to the Premier League with Chelsea.

Viera remained integral to Arsenal’s triumphs across the turn of the millennium, adding a second domestic double in 2001/02, before captaining the Gunners during their historic unbeaten Premier League campaign two seasons later.

Domineering and dynamic, his battles with Roy Keane became an unforgettable chapter in Premier League history as Arsenal and Manchester United enjoyed the greatest rivalry the division has seen.

After seven major trophies, 406 appearances, and legendary status assured, he signed for Juventus in search of a new challenge before a trophy-laden spell at Inter Milan.

Manchester City proved Vieira’s final destination before offering the Frenchman a route into coaching, as time was called on a career few will forget.

Vieira will be remembered as one of the greats of Premier League history and is etched into Arsenal folklore, a rampaging midfield general who stamped his authority on the biggest occasions and dragged his teammates onwards.

Alongside Petit the duo were an irrepressible force, combining to create a monstrous midfield dynamic that ushered in a new era of success at Highbury.