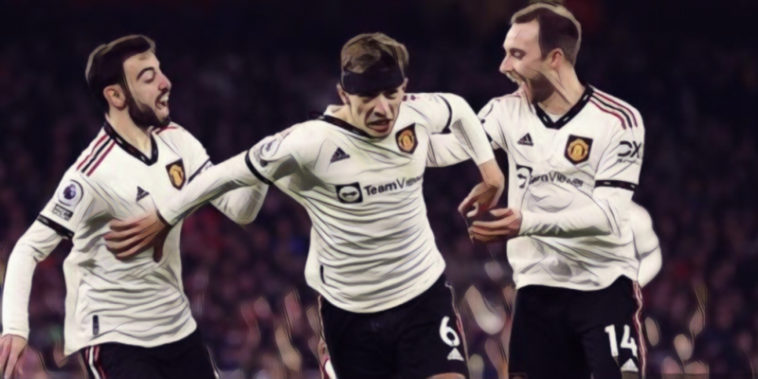 Manchester United’s faint hopes of staging a title charge effectively ended today after they lost 3-2 away at Arsenal.

Premier League leaders Arsenal started in electric form, but after Martin Odegaard and Thomas Partey failed to hit the target with half chances Manchester United began to find a foothold in the game.

In the 17th minute, Erik Ten Hag’s side went from working their way into the game to being in the lead. Man-of-the-moment Marcus Rashford brilliantly nutmegged Partey in the centre of the pitch before unleashing a ferocious strike that was past Aaron Ramsdale and into the bottom left-hand corner in an instant.

Arsenal continued to look dangerous every time they got into the final third though and seven minutes later they would level the scores. A neat team move ended with Granit Xhaka whipping in an inviting cross from the left which striker Eddie Nketiah gladly headed past David de Gea.

Eight minutes into the second the Emirates would explode when Arsenal took the lead and it would once again be a goal laced with real quality. Bukayo Saka skipped inside Christian Eriksen before curling a marvellous strike into the bottom corner from 25 yards out.

United reacted well to going behind with Rashford forcing his England colleague Ramsdale into a superb save with a close-range effort, a save that got even better after replays showed it had taken a deflection.

Just before the hour mark United would draw level with a looping header from diminutive centre-back Lisandro Martinez after Ramsdale had failed to properly deal with a Christian Eriksen cross.

On 83 minutes it was De Gea’s turn to pull off a world-class stop when the Spaniard showed razor-sharp reflexes to get down low and push away a Nketiah half-volley.

Mikel Arteta’s side piled the pressure on throughout the last 20 minutes and in the 90th minute Nketiah expertly guided home from a couple of yards out after Odegaard’s shot had been deflected into his path.

United were zapped as the game went on. Another late goal conceded.

Perhaps Garnacho could have come on sooner to stretch Arsenal but generally though Ten Hag has few options to change the flow of games. Weghorst had some tidy touches but him staying on shows as much.#MUFC

Speaking afterwards United boss Ten Hag was clearly unhappy with how his side conceded all three goals.

“It was a great game, a lot of tempo and the audience is the big winner,” Ten Hag told BBC Sport.

”Two top teams but of course we are disappointed when you lose this game in the late stage. All the goals we conceded today are mistakes, it can’t happen.

“Even last week we were so hard to beat in such situations, today we were not. All three goals we could have avoided.

“They are very good on the ball but we are a good defending team. There were not a lot of open chances. We made mistakes which we cannot make. This game was decided by small details but also the decision making, that is hard to accept and we have to learn from it.

“I want to win. It is not good enough, we want to be the number one but make mistakes, that is clear and what I told them.”