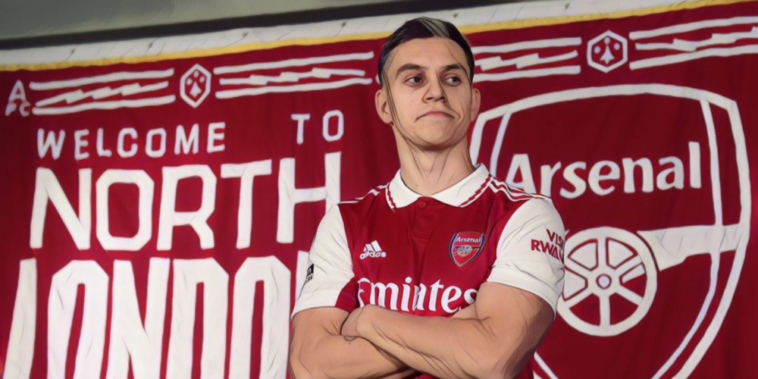 While there was widespread shock at Arsenal missing out on Mykhailo Mudryk to Chelsea, they have responded swiftly, signing Leandro Trossard from Brighton after his fallout with new Seaguls boss Roberto De Zerbi.

At 28 years old, the Belgian certainly doesn’t bring the same potential at his Ukranian counterpart. However, he is arguably a more sensible move for Arsenal to add depth to their attacking options and sustain their Premier League title charge this campaign.

There are clear similarities between Mudryk and Trossard, showing Arsenal were clearly attempting to recruit a specific type of profile for their frontline. Both are left-sided attackers who are adept at positioning themselves deep and progressing the play through dribbling. They can also pose a threat in higher, narrower areas, receiving the ball in between the lines to then spin and drive at the opposition’s backline.

In Trossard, though, Arsenal have a more rounded attacking threat who can affect play from more areas of the pitch. While he can hug the touchline and receive the ball out wide, he’s comfortable enough at receiving the ball at different angles to pick up the ball in more central areas. He is also surprisingly good at protecting the ball, allowing him to retain possession or win fouls in more congested areas. For a team that relies on interchanges of position as much as Arsenal, Trossard’s versatility in this respect will be a welcome asset.

The Belgian’s passing abilities are also somewhat unique for a winger. It’s not his foremost strength, as he can delay his actions too long or have streaky accuracy when attempting riskier passes. However, he is capable of switching the play with long diagonals or playing incisive through balls from the left inside channel across to the centre of the box.

Having played as a wingback for large spells under Graham Potter, he’s also comfortable going to the byline to cross or delivering from deeper areas in the half or wide space. His capacity to attempt multiple kinds of passes makes him a more varied creative threat, making him difficult for the opposition to defend and malleable to the players around him.

The end of a chapter. Thank you Seagulls for the wonderful years! 💙 pic.twitter.com/Vp15ahsvXO

The other standout trait Trossard possesses that will allow him to fit well into Arsenal’s setup is his defensive work. Arsenal press intensely from the front, recording the fourth-best passes per defensive action (the leading metric for pressing intensity and height) in the league, meaning their forwards need to have the work rate and intelligence to execute that style.

The Belgian is a diligent presence off the ball, and has succeeded in the past at pressing to place opposition players in a cover shadow, or in other words, pressing to block the maximum number of passing options available to the player with the ball.

January transfer signings are usually meant to make an immediate impact on the starting eleven. For that to happen, the player should be able to adapt to the league, playing style, and designated role of the team they’re joining. Trossard already satisfies those demands.

As an impact player from the bench or a rotational starter, he possesses the necessary traits in and out of possession to be a useful asset for Mikel Arteta. Although he wasn’t their first choice, Leandro Trossard is yet another intelligent signing made by Arsenal to strengthen their already impressive squad.