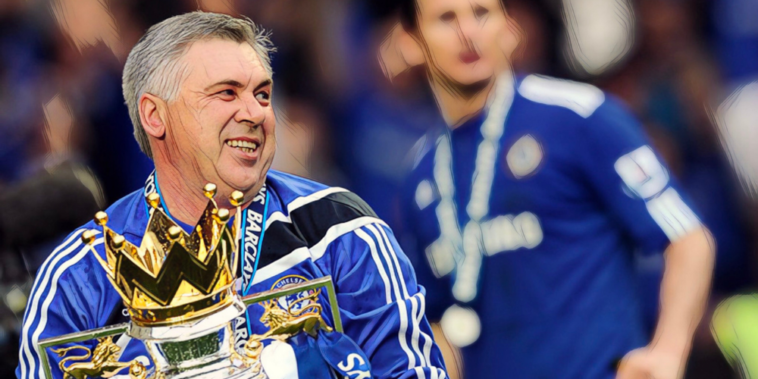 Carlo Ancelotti is closing in on unprecedented history as Real Madrid edge closer to La Liga, with the Spanish side in need of just one point to be crowned champions.

Real Madrid’s impending coronation will see Ancelotti become the first coach in history to have won league titles in each of Europe’s five major leagues, during a managerial career that has seen the Italian write his name into the record books.

Ancelotti has enjoyed incredible success, remaining one of just seven men to have won the European Cup as both a player and manager, whilst his three Champions League trophies are a landmark he shares with Bob Paisley and Zinedine Zidane.

As the 62-year-old closes in on more history, we’ve decided to look back at and remember each of his league title triumphs.

Ancelotti’s managerial career took in spells at Reggiana, Parma and Juventus before his appointment at AC Milan, a period which saw the Italian become one of Europe’s most respected coaches.

He led the Rossoneri to Champions League success in 2002/03, before winning the first domestic league title of his career the following season.

Andriy Shevchenko finished as the league’s leading scorer with 24 goals to fire Milan to success, with the Ukrainian – who was later named as winner of the Ballon d’Or – scoring the decisive goal as the title was sealed with a 1-0 win over runners-up Roma.

The campaign also marked a breakthrough for Kaka who replaced Rui Costa as the side’s creative force, with the Brazilian scoring 14 goals in all competitions during an impressive debut season at the San Siro.

Milan’s 2003/04 success was the only league title Ancelotti won in seven seasons with the club, though he did add a second Champions League to his collection in 2006/07.

Ancelotti’s impressive CV saw him emerge as a candidate for Chelsea in 2009, as the West Londoners looked to the Italian to lead a new era at Stamford Bridge.

Big name managers had come and gone under Roman Abramovich’s regime, but Ancelotti’s first season could hardly have been better as Chelsea secured a first ever Premier League and FA Cup double.

A certain @MrAncelotti took the reins @ChelseaFC #OnThisDay in 2009

It worked out well… pic.twitter.com/SE7fpnymU2

The Blues did so in record-breaking style and became the first team since 1963 to score 100+ goals in an English top-flight campaign, setting a number of Premier League records in the process including most goals scored (103), most goals scored at home (68) and best goal difference (+71).

Chelsea sealed the title with an 8-0 thrashing of Wigan at Stamford Bridge on the final day, a win which ensured the club finished a point ahead of Manchester United.

Ancelotti became Paris Saint-Germain’s most high-profile managerial appointment as the Parisians looked become one of Europe’s leading clubs and he led the side to the Ligue 1 title during his first full season in charge.

PSG had finished as runners-up the previous season with Ancelotti arriving mid-season and the Italian strengthened his squad with the signings of Thiago Silva, Zlatan Ibrahimovic and Ezequiel Lavezzi.

Ibrahimovic finished as the league’s leading scorer with 30 goals as PSG ended a 19-year wait to be crowned champions, overcoming an indifferent start to finish 12 points clear of Marseille.

Ancelotti departed at the end of the season, however, requesting to leave the Parc des Princes amid interest from Real Madrid.

Ancelotti won the Champions League during his first spell at Real Madrid, but was harshly dismissed after two seasons without a league title.

He replaced Pep Guardiola in charge of Bayern Munich in 2016 and led the side to the Bundesliga title during his debut campaign, losing just two games all season to finish a huge 15 points ahead of RB Leipzig.

Ancelotti’s reign with Bayern Munich lasted little more than that debut season, however, as cracks began to appear.

Rumours began to circle that he had lost the dressing room with senior stars unhappy with his approach. Having become accustomed to the detailed tactics of Guardiola, there was an accusation that Ancelotti allowed too much freedom to his squad.

A failure to make an impact on the Champions League, including a 3-0 humbling at former side PSG, also contributed to his dismissal after less than 18 months in charge.

Read Five of the most memorable Champions League semi-finals