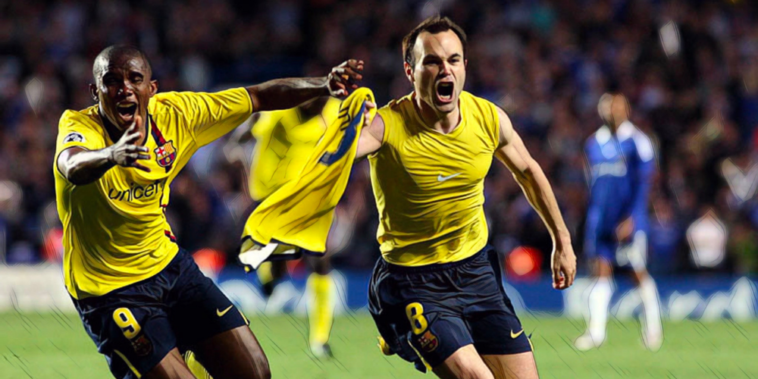 As the semi-finals of the UEFA Champions League get underway this week, we’ve decided to look back on some of the most memorable last four ties in the competition’s history.

The semi-finals have included some unforgettable encounters in past seasons, from captivating comebacks to thrilling ties, as the final four compete for a place in the final.

Ahead of this week’s semi-final showdowns, we’ve looked back at five of the most memorable Champions League semi-finals of all time.

Manchester United’s treble success was built on a spirit that saw Sir Alex Ferguson’s side fail to accept defeat, with their run to Champions League glory including some remarkable comebacks.

The Red Devils’ dramatic final win over Bayern Munich is etched into the competition’s folklore, but their semi-final comeback against Juventus remains one of the most memorable last four encounters.

Juventus were bidding to reach a fourth consecutive Champions League final and had looked in pole position to progress, despite Ryan Giggs’ late equaliser as the first meeting ended in a 1-1 at Old Trafford.

The Italians raced out of the traps in Turin and took a two-goal lead inside just 11 minutes, as Filippo Inzaghi’s brace had Juventus on course to reach the final.

United rallied, however, and led by an inspirational performance from Roy Keane – whose later yellow card would mean he ultimately missed the final through suspension – the Red Devils roared back.

Keane’s brilliant header reduced the deficit before Dwight Yorke’s 34th-minute goal put the visitors ahead on away goals before the half-time whistle.

Juventus pushed for a winner in the second period, but Andy Cole’s goal late on sealed a famous comeback win and sent United through to a first European Cup final in more than three decades.

Late drama, controversial calls from officials, and a sliding doors moment for arguably the greatest club side of all time, Chelsea’s semi-final clash with Barcelona was not short of incident.

Guus Hiddink’s arrival as interim manager had steadied the ship at Chelsea following Luiz Felipe Scolari’s exit and the Dutchman had overseen progress to the Champions League’s last four.

A goalless first meeting in Barcelona had made Chelsea slight favourites for the return before Michael Essien’s stunning goal put the West Londoners ahead at Stamford Bridge.

Chelsea’s search for a second saw the Blues have four penalty appeals turned down by Norwegian official Tom Henning Ovrebo, who later admitted his mistakes as Barcelona left it late to snatch a decisive away goal.

“It was not my best day really,” Ovrebo later told Marca.

“Some days you are not at the level you should be. I can’t be proud of that performance. There were several errors and everyone will have their opinion of those plays.”

Barcelona – who were reduced to 10 men after Eric Abidal’s 66th-minute red card and had not registered a shot on target until stoppage time – equalised in the 93rd-minute through Andres Iniesta’s stunning goal to spark wild celebrations.

At the final whistle, the referee was surrounded by angry Chelsea players with Didier Drogba and Jose Boswinga later banned by UEFA for their confrontational behaviour.

It mattered little as Barcelona marched on, sealing a historic treble under the guidance of novice head coach Pep Guardiola.

Real Madrid and Barcelona is arguably the biggest rivalry in world football and the Spanish superpowers collided in the 2010/11 Champions League semi-finals.

Barcelona had emerged as the dominant force in Spain under the management of Pep Guardiola, but the arrival of Jose Mourinho at Real Madrid had posed a problem for the Catalan coach.

The first leg of the semi-final was the fourth El Clasico meeting of the campaign between the teams, with the previous games having included a 5-0 win for Barcelona and Real Madrid’s success over their arch-rivals in the Copa del Rey final.

10 years ago today, Lionel Messi did this against Real Madrid in the Champions League 🤩

A bad-tempered clash saw red cards for both sides, with Barcelona substitute Jose Pinto dismissed after a touchline fracas as the teams left the field on the half-time whistle.

Real Madrid’s red came on the pitch as Pepe was sent off for a high challenge on Dani Alves and Barcelona soon took advantage of their extra man, as Lionel Messi scored twice late on.

Having turned home Ibrahim Afellay’s cross for the opener, Messi then scored one of the Champions League’s greatest goals with a stunning solo run as Barcelona emerged victorious at the Bernabeu.

Liverpool produced one of the Champions League’s greatest comebacks during the 2018/19 semi-finals, becoming the first team since 1986 to turn around a 3-0 deficit and progress from the last four of the European Cup.

Lionel Messi’s brilliance had put Barcelona in control of the tie ahead of their return trip to Anfield, to face a Liverpool side without both Mohamed Salah and Roberto Firmino.

Divock Origi – in as a replacement – started the unlikeliest of revivals with a seventh-minute goal, before substitute Georginio Wijnaldum sparked real hope of a comeback early in the second period.

The Dutch international scored twice inside three minutes to level the tie on aggregate and the shell-shocked Spaniards were caught sleeping for Liverpool’s fourth goal of the evening.

Trent Alexander-Arnold’s quickly-taken corner caught the Barcelona defence off-guard and Origi turned home his second as Anfield erupted, with the final whistle calling time on one of the most captivating European revivals in recent memory.

It was just the fourth time a team had overturned a three-or-more goal deficit from the first leg of a Champions League knockout stage tie and sent Liverpool on their way to a sixth European crown.

The 2018/19 season was a campaign for Champions League comebacks, with both semi-finals proving unforgettable viewing.

Just one day after Liverpool had stunned Barcelona, it was the turn of Tottenham to complete a comeback and set up an all-Premier League final in Madrid.

Tottenham had looked set to bow out of the competition to surprise package Ajax, who had eliminated both Real Madrid and Juventus on their route to the semi-finals.

Donny van de Beek’s goal had given Ajax a 1-0 win at Spurs in the first leg, before the Dutch side opened up a 3-0 aggregate advantage through further goals from Matthijs de Ligt and Hakim Ziyech in Amsterdam.

Spurs, however, fought back and two goals inside just five minutes from Lucas Moura changed the complexion of the tie and left the North Londoners within a goal of progress.

A chaotic conclusion to the tie saw Spurs pour forward in search of a decisive goal, with Jan Vertonghen hitting the crossbar as Ajax came under huge pressure.

The home side’s resistance was eventually broken six minutes into stoppage time as Moura fired home his hat-trick, completing an away goals win for Spurs who progressed to a first-ever Champions League final in stunning style.