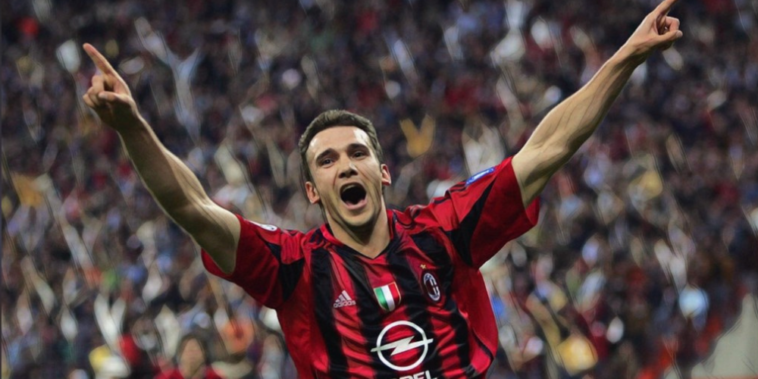 Modern football has few secrets. The increasingly networked global game and evolution of the internet has made unforeseen emergences almost impossible.

The trend now is to showcase promising talents for the world to see, with YouTube montages providing countless clips and compilations of prospects barely into their development stage at top academies.

Rewind a little more than two decades, however, and it was quite possible for starlets to spring a surprise on the biggest stages of all, with Andriy Shevchenko one who made the world sit up and take notice at the turn of the millennium.

Shevchenko formed part of a Dynamo Kyiv side who ruffled the feathers of Europe’s elite during the late nineties, taking on and beating Spanish superpowers in the Champions League.

It was the start of an evolution that saw the Ukrainian become one of the defining goalscorers of his generation.

Shevchenko broke into the Dynamo Kyiv side during the 1994/95 season after a string of goals for the club’s second side. The fresh-faced forward soon made an impact as the capital club enjoyed huge success, winning five consecutive league titles and three domestic cups under the management of Valeriy Lobanovskyi.

The latter two of those triumphs saw Shevchenko star, scoring 66 goals in all competitions across his final two seasons in Kyiv. It was those campaigns that saw the club challenge the established elite of the European game, with a performance in Barcelona one that catapulted Shevchenko into the collective consciousness.

Dynamo had began the group stage in impressive form and beat Barcelona 3-0 in the Ukrainian capital, but the Spaniards were expected to issue a response ahead of the Camp Nou return.

What followed was an exhibition in goalscoring from a forward fast forging a reputation as one of the continent’s classiest finishers, as Shevchenko scored a first-half hat-trick in Catalonia.

He glanced home a first from an in-swinging free-kick, before showing desire and determination to beat Vítor Baía’s outstretched arms to the ball and nod in a second.

His third came from the spot on the stroke of half-time, after a struggling Spanish defence hacked down the forward inside the area. It was a statement result as Dynamo won 4-0 on the night, and a breakout performance from their brightest talent.

Fearless and formidable, Shevchenko and his side captured the hearts of the masses but the run of the Ukrainian underdogs was eventually halted in the last eight, losing to Juventus over two legs.

However, having retained the services of Shevchenko and Serhiy Rebrov, Dynamo returned the following season to reach the semi-finals with the former finishing as the Champions League’s leading scorer.

His eight goals in the competition included three scored across two legs against Real Madrid, as Lobanovskyi’s side upset another Spanish superpower by dumping out the holders in the quarter-finals.

Shevchenko ended the season with two goals against Karpaty Lviv in the Ukrainian Cup final and his European exploits had attracted interest from the western giants.

AC Milan issued a cheque for $25m to Dynamo Kyiv in July 1999, a record purchase for the Italians in an era where Serie A sides spent big in pursuit of success.

It was a move that provided a platform for Shevchenko to reach superstar status, his first season seeing the record arrival plunder 24 goals to win the Capocannoniere award as the league’s leading scorer.

He became the sixth foreign player and first since Michel Platini in 1983 to finish as the division’s leading scorer in his maiden campaign.

Shevchenko netted another 24 league goals the following season as he cemented his status as one of Europe’s great goalscorers, but his prolificacy was not initially matched with silverware success in Milan.

Milan finished third, sixth and fourth across Shevchenko’s first three seasons with the Rossoneri, but the arrival of former favourite Carlo Ancelotti as manager soon led to an upturn in fortunes.

Ancelotti revolutionised his midfield with Andrea Pirlo converted into a deeper midfield role, finding an equilibrium in the centre of his side as Pirlo conducted an engine room that contained the bite of Gennaro Gattuso and all-round attributes of Clarence Seedorf.

Shevchenko spearheaded the side and in Filippo Inzaghi – signed from Juventus – he had the perfect partner to share the goalscoring burden.

The 2002/03 season proved the most frustrating of Shevchenko’s time with Milan to date on a personal level, but it ended with the ultimate success and the clinical centre-forward at the centre of his side’s decisive moments.

He scored just ten goals for the campaign in an injury-disrupted campaign, but came to the fore during the Champions League’s latter stages as Milan were crowned champions of Europe.

Shevchenko scored in the quarter-final win over Ajax, before netting the crucial away goal as city rivals Inter Milan were beaten in the semi-finals.

It was one of 14 goals he scored against Inter during his time with AC Milan, an all-time record in the Derby della Madonnina.

In the final and again up against Italian opposition, it was Shevchenko’s penalty that decided the shootout following a goalless draw with Juventus and ensured a sixth Champions League trophy headed to the San Siro.

Shevchenko returned to form and fitness as he finished as the leading scorer in Serie A for a second time in 2003/04, scoring 24 goals in 32 appearances as Milan won the Scudetto for the first time in five seasons.

Evasive and efficient inside the area, his goals propelled Milan to the title and further success in the UEFA Super Cup and Supercoppa Italiana. Shevchenko scored in both finals, including a hat-trick in the latter success over Lazio.

As 2004 came to a close he was named as European football’s finest footballer, becoming just the third Ukrainian – after Oleg Blokhin and Igor Belanov – to win the Ballon d’Or.

The following season brought disappointment as his penalty miss cost Milan in the Champions League final, after Ancelotti’s side had inexplicably imploded to surrender a 3-0 lead to Liverpool.

Having missed a glorious chance to win the final in extra-time, his tame penalty was saved as Milan found themselves on the wrong end of a captivating and chaotic comeback in Istanbul.

His time with Milan eventually came to an end in 2006, as Chelsea spent a British transfer record of £30m to prise Shevchenko from the San Siro. He departed having scored 173 goals in just 296 appearances, a record bettered by only Gunnar Nordahl.

The move to the Premier League was a disappointment, however, as Shevchenko proved an awkward fit in a well-oiled machine at Stamford Bridge. Chelsea had won back-to-back Premier League titles under Jose Mourinho, whose success had come with Didier Drogba operating as a one-man forward line.

Accommodating Shevchenko was troublesome and the star signing struggled with form and fitness issues, a goal on debut in the Community Shield a false dawn as he scored just 22 goals across his two seasons in west London.

It is a haul that is perhaps better than is often perceived, but hugely underwhelming given his past pedigree.

There are some belters in here 💥

Reminisce some of @jksheva7's finest moment's in a @ChelseaFC shirt, after he signed for the Blues #OnThisDay in 2006 pic.twitter.com/4JhO9EW8M6

Shevchenko’s move to Chelsea could not escape from the narrative that he had been a vanity signing from owner Roman Abramovich, a marquee man added to a side already conquering English football.

He returned to Milan on loan but failed to find his form, resembling a faded force in his second spell with the Rossoneri. The version of Shevchenko that once illuminated the Italian’s side, tormenting defences in the famed red and black, was now a thing of the past.

His career ended where it had began in the colours of Dynamo Kyiv, scoring 30 goals in 83 appearances during a final swansong at the club where he had emerged as a star.

Shevchenko hung up his boots as Ukraine’s greatest ever footballer, a status underlined with his national record of 48 goals in 111 caps.

He had captained the side at a first major tournament as Ukraine reached the 2006 World Cup quarter-finals and ended his career after a home European Championship six years later, his two goals in a 2-1 win over Sweden not enough to secure progress from the group stage.

The latter career of Shevchenko has perhaps, unfairly, diminished some of the wonderful memories, but his best at Milan was simply sensational. Amongst the most complete goalscorers of the noughties, he combined pace and poise with intelligent movement and instinct inside the area.

Glorious goals, silverware success and a rise to Serie A superstardom, the goalscoring gifts of Andriy Shevchenko secured his place among the royalty of the Rossoneri.