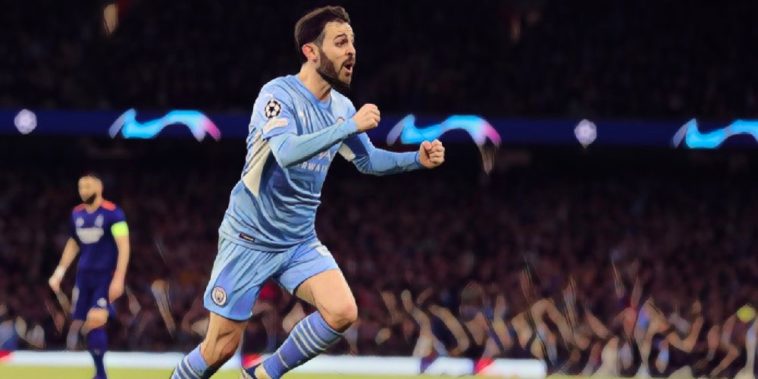 Manchester City earned a slender advantage after running out 4-3 winners in an enthralling first leg of their Champions League semi-final against Real Madrid.

It was the English side who got off to the perfect start, Riyad Mahrez cutting in from the right flank before curling a delicious ball into the box that was met by the diving header of Kevin de Bruyne to open the scoring after just 94 seconds.

City doubled their lead in just the 11th minute, goalscorer De Bruyne receiving the ball on the left before firing it in towards Saturday’s four-goal hero, Gabriel Jesus. Some poor defending from David Alaba allowed Jesus to turn before the Brazilian calmly slotted beyond Thibaut Courtois.

City were completely in the ascendancy and looked like they would run away with it, but missed a couple of hugely presentable chances to extend their lead, Riyad Mahrez’s effort into the side netting leaving Pep Guardiola apoplectic at his decision to take the shot on rather than to square it to the unmarked Phil Foden.

His frustrations would be well-founded as Real Madrid got back into the game with a goal out of nothing. Ferland Mendy floated a cross into the box from the left towards talisman Karim Benzema, the Frenchman sweeping a left-footed volley beyond Ederson – his 40th of the season.

Mahrez missed another chance early in the second half, crashing an effort against the post, though in the 53rd minute, City would finally restore their two goal advantage. The Blues won the ball back down their right, before makeshift right-back Fernandinho clipped a lovely ball across the box to find Foden who nodded home from close range.

Fernandinho had been brought on at right-back as a first half substitute in place of the injured John Stones, and within two minutes of providing the assist for City’s third, the veteran was turned on the halfway line by compatriot Vinicius Junior. The 21-year-old Brazilian scampered towards goal before slotting past Ederson from six yards to cut the arrears once more in what was a thrilling game.

The sixth goal of the evening came in the 74th minute, the referee playing an excellent advantage after Toni Kroos had brought down Oleksandr Zinchenko on the edge of the box, only for Bernardo Silva to pick up the loose ball, drift into the area, and lash a superb strike into the top corner, though the flat-footed Courtois really should have done more.

Bernardo Silva rifles the ball into the Real Madrid net after a clever advantage from the ref!

This game is an absolute thriller! 🔥🔥🔥#UCL pic.twitter.com/K2f60EBgl6

The drama wasn’t finished there though, Real Madrid being awarded a penalty after the ball struck a the flailing arm of Aymeric Laporte in the box, with Benzema – who had missed three of his last four penalties – stepping up and slotting an audacious panenka to make it 4-3.

City were by far the better side on the night and they really should have scored more than four, though Real Madrid refused to give in to set up a superbly poised second leg in the Bernabeu next week. Speaking after the game, City boss Pep Guardiola reflected on a ‘fantastic’ game, but felt his side’s build-up was ‘nervous’ at times.

“It was a fantastic game for both sides,” he BT Sport. “We did many good things. Unfortunately, we conceded goals and we could not score more. But two games and we have another one in one week.

“We played a fantastic game against an incredible team. The moments where they rise and come back into the game in the first half I think we gave them as our build-up was so nervous. Normally we are so safe and so good. Also they press really good and strong.

“All around the world and for Manchester City, we are so proud. But it is about reaching the final and sometimes football happens. We go to Madrid to try to win the game.

“We went out of the Champions League to Tottenham when Llorente with the hand. Today it is a hand for Laporte. It happens. All we can do is perform as we perform.

🥵 Madrid. Would. Not. Lie. Down #UCL pic.twitter.com/njFGWzjMDw

“I say to the players to rest. Leeds [at the weekend] now is the most important thing and we go to Madrid to win. Both teams want to attack and have the quality to play.

“Football is a fantastic spectacle. Congratulations to Carlo and his team as they are so good. At the same time, we saw ourselves that we can be there.”