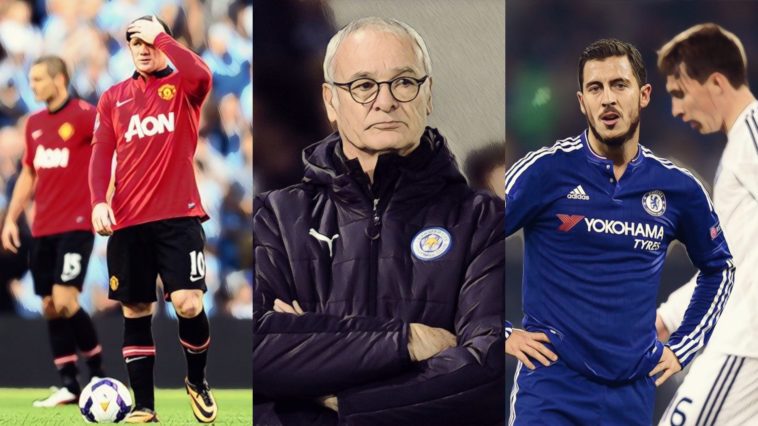 In 2019/20, Liverpool ended their thirty year wait for the Premier League when they topped the table in emphatic fashion, racking up the second most points by an English team in a single campaign ever.

However, in 2020/21, Liverpool’s title defence has gone horribly awry. Despite being top of the table as recently as December, the reds form has fallen off a cliff in the new year with Jurgen Klopp’s team yet to win a game at Anfield in 2021.

But how badly do the reigning champions compare to the worst title defences in Premier League history? Are they really the ‘bad champions’ Roy Keane said they are?

Although not statistically the worst title defence ever, none have ever had the raw impact of Manchester United’s first season without Alex Ferguson.

The Red Devils hired Everton manager David Moyes to replace the great Scot in 2013, but it turned out to be one of the most disastrous decisions in the club’s history.

Moyes’ uninspiring leadership at the helm made him unpopular with both the fans and the players, with some of his comments to the media not helping his cause.

He said that hated foes Liverpool were the favourites when they came to Old Trafford, and admitted that his team needed to aspire to the standards set by their local rivals, Manchester City. There was no coming back from those statements.

By December any hope of a title challenge was dead in the water. United’s home form was so bad that they suffered defeat to the likes of West Brom, Newcastle and Sunderland.

Moyes’ boys earned 57 points before he was binned off and replaced temporarily by club legend Ryan Giggs. United ended a dismal season in seventh position with just 64 points, their worst ever finish in the table.

It was the first time they had failed to qualify for European competition since English clubs were readmitted to Europe in 1990.

David Moyes, Frank O’Farrell and the link between Manchester United’s ‘chosen ones’

With the help of Jack Walker’s millions, Blackburn enjoyed a meteoric rise from the second tier all the way to the summit of English football, winning the Premier League in 1995.

The club would fail to build on that memorable success, however. Title-winning manager Kenny Dalglish moved upstairs into a Director of Football role, while former assistant Ray Harford took over in the dugout.

The succession plan hit the rocks almost immediately, as Rovers won just three of their opening ten league matches and exited the Champions League at the group stage.

Remarkably, Alan Shearer still won the Golden Boot that season with a haul of 31 goals, which sparked a late revival to see the club eventually finish seventh. They ended up with 28 fewer points than they had in the previous campaign having lost 13 matches, and were 21 points adrift of eventual winners Man United.

The sale of Shearer to Newcastle United that summer in a world record transfer deal only hastened their downfall, and they were relegated in 1999.

Howard Wilkinson’s Leeds United team peaked in 1992, winning the old First Division title the season before it was rebranded as the Premier League.

The Whites’ magnificent midfield of Gary McAllister, Gordon Strachan, David Batty and Gary Speed played behind the wonderful Eric Cantona. Together they took advantage of a waning Liverpool and a Man United team yet to hit their peak.

Their glittering success could hardly be more contrasted with the miserable season that followed, however.

It all went downhill when Wilkinson bewilderingly sold star striker Cantona to rivals Man United, who subsequently went on to win the title.

Leeds on the other hand went on to lose 15 games and finish in 17th place, just two points above the relegation zone. Their tally of 51 points is the third worst for a defending champion in the Premier League era, and that was when it was still a 42-game season.

In 2016 we witnessed one of the greatest underdog stories in football history, as Leicester City somehow won the Premier League title against all odds.

No one was expecting a repeat in 2017, but the drop-off was even worse than imagined. Their title defence got off to the worst possible start with a 2-1 defeat to a woeful Hull City side on the opening day.

The Foxes managed just five victories by February. Without N’Golo Kante’s energy in midfield, and with Jamie Vardy and Riyad Mahrez failing to sparkle like they had, there was a real fear that Leicester would become the first defending champions to be relegated since Man City in 1938.

They finished 12th in the table with just 44 points, but did at least enjoy a good run in the Champions League, reaching the quarter-final stage.

While no one expected much of Leicester in the year after their title triumph, the same could not be said of Chelsea during José Mourinho’s second stint as manager.

After winning the league with relative ease in 2015, the Blues were fancied to retain their crown the following season. Instead they suffered one of the worst collapses ever seen by a Premier League side.

In their opening day clash with Swansea City, Chelsea team doctor Eva Carneiro and physiotherapist Jon Fearn ran onto the pitch to treat Eden Hazard. Mourinho was apoplectic. Carneiro would later take the club to court and eventually win a £5 million settlement, while Chelsea unravelled from that very moment.

Mourinho had seemingly lost the dressing room one by one, but the fans still supported the Portuguese tactician, uncharitably referring to some of the underperforming players as ‘rats’.

Reliable caretaker Guus Hiddink took over until the end of the season to guide them to tenth and the same points differential as Leicester’s champions, but with the quality in that squad, this is surely the worst title defence of all time.