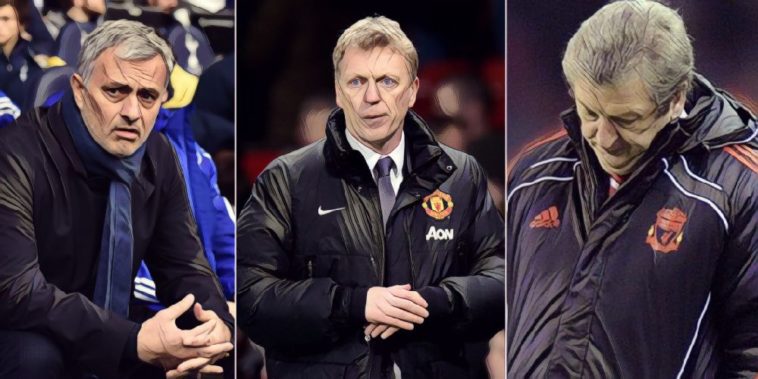 The Premier League may argue to be the most competitive of Europe’s major leagues, but English football undoubtedly has its leading sides, a collection of teams colloquially referred to as the ‘big six’.

The six sides often make up the highest positions in each Premier League season and have enjoyed a wealth of success, but we’ve decided to look back at the most miserable campaigns for each of English football’s finest.

The dominant force of the Premier League era, Manchester United assumed the mantle as English football’s most successful side courtesy of a glorious era of silverware under Sir Alex Ferguson.

Ferguson ended the club’s 26-year wait for a league title in the inaugural campaign of the rebranded division, whilst the Red Devils never finished below third – winning a further 12 titles – in the two decades following that initial triumph.

Their sorry season saw the club finish on a low of 66 points and included embarrassing home defeats to both Newcastle and Sunderland, in addition to thrashings against arch-rivals Manchester City and Liverpool.

Liverpool may be enjoying a fine period in their modern history but less than a decade ago the Reds were in a far different predicament, their fortunes faltering following the mismanagement of the club’s previous owners and ill-fated appointment of Roy Hodgson as manager.

Club legend Kenny Dalglish had been drafted in to take charge during the 2011/12 season but could only oversee a campaign of Premier League mediocrity, Liverpool recording their joint-lowest finish of the Premier League era after slumping to eighth.

Their 52 points saw the club finish a huge 37 points behind eventual champions Manchester City, whilst Dalglish’s side only finished above lowly Fulham by virtue of goal difference. The fortunes of a side containing the likes of Jay Spearing and Charlie Adam were lifted somewhat with League Cup success, but only after scraping past second-tier Cardiff on penalties in the final.

Arsenal have enjoyed a status as challengers for the title for much of the Premier League era, but the initial seasons of the rebranded division saw the north London side endure mixed fortunes.

Amongst those was a frustrating campaign in 1994/95, a season which saw George Graham memorably sacked and the Gunners stutter to a 12th-placed finish.

Such were their struggles the Gunners were only the fifth-highest of all the capital sides, finishing below the likes of Tottenham, QPR, Wimbledon and Chelsea.

Chelsea’s lowest ever points tally of 50 has been achieved on two occasions, though each were under vastly different circumstances.

The west London side were a mid-table outfit during the early seasons of the Premier League before a run of cup success towards the end of the nineties and early 2000’s, the first of their lowest ever points tallies coming during a 1995/96 season in which the club finished 11th.

Chelsea’s fortunes would be forever changed following the billionaire takeover of Roman Abramovich, however, the Russian’s investment catapulting the side into the genuine elite of European football.

Abramovich’s finances have seen the Blues win five league titles since 2003, though the club would match their lowest ever Premier League points tally just a year after being crowned champions.

The Portuguese’s exit and subsequent arrival of caretaker Guus Hiddink improved results, but Chelsea still finished the season 10th in what was then the Premier League’s worst ever title defence.

Tottenham have bridged the gap to the league’s leading sides in recent years, becoming Champions League regulars and finishing inside the top six in every campaign over the course of the past decade.

The north London side once struggled to compete with England’s elite, however, including a 14th-placed finish during the 1997/98 season.

Despite boasting a side containing the likes of David Ginola and Les Ferdinand, Spurs began the season poorly and their run of results led to manager Gerry Francis resigning from his role mid-season.

A run of six defeats in seven fixtures over the festive period left the club in the relegation places, and facing the realistic prospect of an embarrassing drop into the second tier. The loan signing of former fans’ favourite Jurgen Klinsmann helped propel the club away from danger, though their 44 points saw Spurs finish just four points outside the drop zone.

Like the aforementioned Chelsea, Manchester City’s fortunes would be irreversibly changed following a billionaire takeover of the club, the Manchester side having enjoyed somewhat of a yo-yo existence in the first two decades of the Premier League.

The club’s lowest ever points tally came after relegation during the 1995/96 season, a campaign which saw City fail to win any of their first 11 league fixtures.

Despite signs of improvement, Alan Ball’s side were eventually relegated on the final day of the season, a 2-2 draw with Liverpool seeing City drop out of the Premier League by virtue of goal difference.

They would drop further into the third tier before bouncing back over the following seasons, before Sheikh Mansour’s 2008 takeover began an era of unprecedented success.

No side has won more Premier League titles over the course of the past decade, City unlikely to see a repeat of their 38-point haul any time in the immediate future.