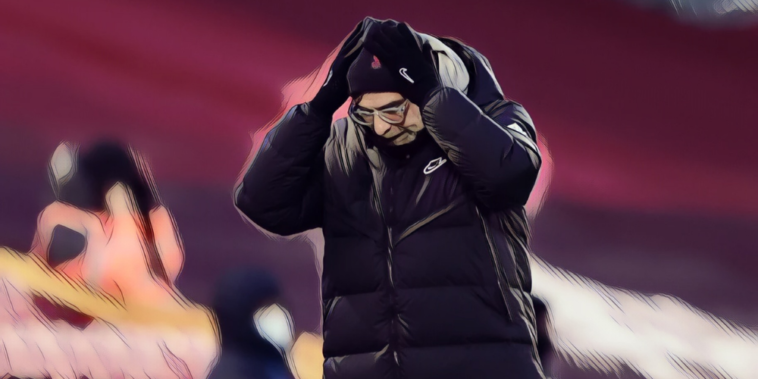 Roy Keane has criticised Liverpool for being ‘bad champions’ and has hammered the Reds’ mindset and Jurgen Klopp’s excuses this season.

Liverpool’s title defence was all but ended following a 4-1 home humbling by league leaders Manchester City on Sunday, the champions ruthlessly exposed in the second half as Pep Guardiola’s side secured a 10th consecutive league victory.

The defeat was the Reds’ third consecutive loss on home soil and leaves them 10 points behind City having played a game more, Klopp’s side having already lost two more games than they managed in the entirety of their title-winning campaign.

City were dominant in the second half as Ilkay Gundogan scored twice for the visitors after missing an earlier penalty, with Raheem Sterling and a Phil Foden stunner securing a first league win at Anfield for almost 18 years.

It was the latest disappointing display from the Premier League champions whose defence of their crown has been ravaged by a mix of injuries and poor performances, and Keane has blasted the Reds for their mindset and results this season.

“We spoke before the game – they are making a lot of excuses. To me they’ve been bad champions,” Keane said on Sky Sports.

“You can lose a game of football but…I can’t figure this group out. Looking at them, even during the week Brighton were comfortable, you can get beaten in a game – there’s a way to be beaten. But I don’t see that.

“I think maybe they’ve believe the hype over the last year or two. We spoke about there would be some sort of drop off but they’re playing for a big team in Liverpool. Almost if they won the league last year and got a big carried away, believe their own hype they’re going to beat teams.

“In my mindset when you’ve won a league title you’re next challenge is ‘can we do it again’. I never got the impression from this squad/group, from their interviews, even from the manager last year when they won it were they saying ‘what’s the next step for Liverpool?’. No. Almost let’s enjoy this.

“Obviously it was a long wait, 30 years, but I never heard any of the players come out and say ‘I want to do it again’. That’s the key.

“Now they’re talking about trying to get in the top four…from winning the league last year. The top four is now where our targets are?

“They’re a huge club. They have to deal with setbacks. Is that not part of the game. If players were fit the whole time it would be fantastic.

“You could look at Man City and say they’re missing their two best players. They’ve come to Liverpool – who have a strong team, I know the two centre halves are missing but they still had their best attacking players on the pitch, still had their best goalkeeper available, they still have international players available. And after the game I think Klopp said the keeper’s feet were cold.”

Keane blasted Klopp for his long list of excuses during the current campaign, the German’s latest remarkable comment questioning whether ‘cold feet’ had played a part in two inexplicable mistakes from goalkeeper Alisson this weekend.

The Irishman was critical of Liverpool manager and has called on the Reds to ‘get on with it’ and ‘perform like champions’, warning the club could face another long wait for silverware success given their performances this season.

“Klopp said earlier City had a break because of the virus, missed two days training. It just goes on and on and on.

“You want a reaction from Liverpool’s performance against Brighton. You go to United in the FA Cup, they shipped seven earlier in the season to Villa – [and that was] with Van Dijk [in the team].

“You could say it’s a one off, a freak season, it’s coronavirus. Just get on with it. Perform like champions.

“You’re Liverpool football club it will be another 30 years before you win the league title. Trust me.”