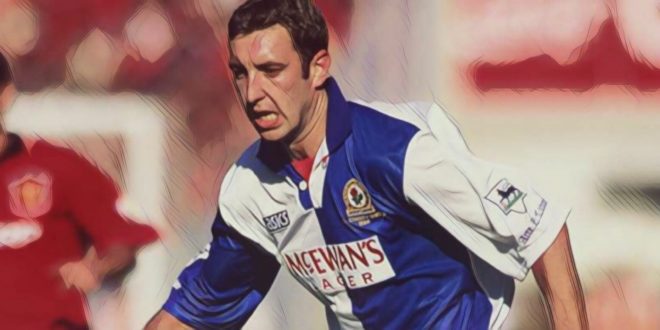 First came the phone call, then a fruit basket.

Both were appreciated by Jason Wilcox as he lay prone in a hospital bed. With his right leg in a brace and doubts about a future in the game rattling around his head, the hours after surgery on his ruptured cruciate knee ligament were filled with a different kind of pain.

Was this the end?

Twenty-three years of age and it’s all over?

It is March 1995 and Wilcox will play no further part in Blackburn Rovers’ Premier League title duel with Manchester United. The injury suffered in the 3-1 home with over Arsenal has ended the flying left winger’s season with 10 games remaining.

Alan Shearer’s gestures helped, even if the phone call was laced with dry humour. “I picked up and he just laughed, ‘hurts, doesn’t it?’” Wilcox tells The Football Faithful.

“I think it was the first call I got. Before that he had been keeping me relaxed, telling me all the time that the surgery wasn’t that bad and it wasn’t sore.

“When I got home a fruit basket arrived and it was from him. It gave me confidence that Alan got back too.”

A year previously and Shearer was faced with the same battle from the same injury. He recovered, firing 34 goals as Rovers did indeed capture a historic championship on the final, dramatic day of a campaign that played out at Anfield and Upton Park.

“When I began my recovery, I regularly confided in him because he remembered what his rehab was like and what he did,” Wilcox continues.

“There was no real programme to follow, it was a bit hit and miss. I would be out with Alan striking balls with my right – because that was the knee that was operated on – and he would say to use the left.

“Because my right was the standing foot it didn’t feel right at all so he helped me focus on getting stronger. I knew I had to work as hard as he did and luckily it turned out well. I still had a career in football which is what I dreamed of as a kid.”

90’s stalwart Jason Wilcox catching it on the sweet spot at Goodison Park back in 93/94. pic.twitter.com/nobbCyNAd2

For Wilcox, recovering in that Cambridge hospital, ensuring he could play on was the most pressing matter to contend with. With limited knowledge around recovery from this type of injury a quarter of a century ago, he feared the worst.

He still has a photograph of the moment he slumped to the Ewood Park turf and looked to the heavens. In agony rather than for inspiration.

“It felt like an explosion in my knee,” he recalls. “It was Arsenal at home towards the end of the season. My knee hadn’t felt right for the couple of weeks before that, but I played on. That was the night it ruptured.

“I tried to carry on, I chased Ray Parlour down the wing for about 15 yards but had to hobble down the tunnel. I knew something was wrong. I was looking to the sky thinking ‘jesus, what is this?’ I don’t think anybody forgets that kind of pain.”

There would be a different kind as he watched on, helplessly, as his teammates sought to get over the finishing line before Man United.

Blackburn only needed to better United’s result on the final day and, despite losing 2-1 on Merseyside, Alex Ferguson’s side’s 1-1 draw away to West Ham United meant Blackburn were champions.

Wilcox, now Academy Director for Manchester City, grew up worshipping Liverpool. A child of the 70s and 80s in northern England, it was not a difficult choice. “I was an arm chair fan but super passionate.

“My idols were Kenny Dalglish and Graeme Souness. So, for Kenny to be my first team manager, all I wanted to do was listen and learn from him. Then to win the league at Anfield, it was unreal. Unreal.

“When I was young all I wanted to do was play in the FA Cup final and play for Liverpool. That was my ambition. When you turn professional you realise it’s a business. All that romance gets taken away.

“I almost stopped being a fan. It became a job and a profession. I admire what Liverpool have done and are doing now, but it’s a business and that’s the way I viewed it.”

Despite his inner demons, Wilcox still made sure to be at Anfield on that faithful day. With crutches by his side and his leg in a brace, his wife dropped him off and collected him afterwards.

“I still wanted to be fully immersed in what was happening, that was important for me,” Wilcox explains.

“It was tough, I was going through my own personal turmoil wondering if I would ever play again but you learn to put a difference face on around the lads to stay positive.

“I always joking and nobody inside knew what was going on inside. That is tiring in itself, putting on a brave front.”

Wilcox didn’t celebrate with his teammates the night of their title success, instead he returned home to be surrounded by family.

The following day, however, he was on the open-top bus parade around the town and was introduced at the reception at Ewood Park.

“There was a big stage there and I only just managed to get on because I couldn’t bend my knee. All these memories from that time, there is a mix of pride and the concern of thinking would I ever be able to get playing again and celebrate achievements like this?”

That remains the only winners’ medal of Wilcox’s career, but it is one that lasted for another decade after successfully overcoming that ‘personal turmoil’.

Back in 2015, the squad gathered together to mark the 20th anniversary of the achievement. It remains the highlight of the club’s recent history, although Wilcox – like his teammates – is quick to refute suggestions that the millions of local businessman Jack Walker bought the title for Blackburn.

Quick as anything some names roll of Wilcox’s tongue.

“Henning Berg. Ian Pearce. Colin Hendry. Tim Sherwood, Mike Newell. Kevin Gallacher. Graeme Le Saux. Tony Gale. These weren’t players that were No.1 targets for every other club. After they were because of what we did.

“But the skill of putting that team together, Kenny [Dalglish] knowing who would fit where, that’s what made it special. Kenny knew how to deal with each player and get what he needed. None of us wanted to let him down.”

Read Also – How QPR shaped Sir Les: ‘The secret to having it all is knowing that you already do.’