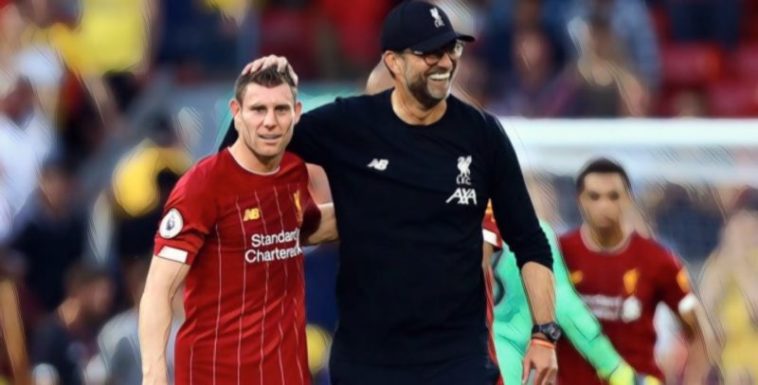 A disproportionate amount of hyperbole and bluster often dog young footballers as they try to navigate their way through the challenging waters of their fledgeling careers. The near frantic desperation from certain corners for the next cohort of players to burst onto the scene only makes a tough job even harder for those trying to make the grade.

One player who has expert knowledge of such testing times is Liverpool stalwart James Milner. The 34-year-old has been part of the Premier League furniture since 2002 and is universally celebrated for his evergreen qualities as his career has entered its autumn years.

Perhaps owing to his celebrated professionalism and timeless qualities, it has been somewhat overlooked that Milner was, in fact, a hot youth prospect at Leeds United back in 2002.

At the time of his debut for his boyhood club, he was the second youngest player ever to feature in a Premier League match at 16 years and 309 days old. His first career goal on Boxing Day of the 2002-03 season made him the youngest scorer in this history of the league, a record he held until 2005.

An awful lot of success has come his way since, but the Yorkshireman cites his time as a teenager at Elland Road as helping to prepare him mentally for the latter challenges he would face in his career. There have been few players to grace the league that have possessed a better mentality than Milner and it is this endearing quality that Liverpool should look to exploit as they hope to cement a period of prolonged success under Jurgen Klopp.

Back in December club and player ended weeks of uncertainty when a contract extension was mutually agreed until the end of the 2021/22 campaign. Tying such a veteran down in what is likely to be his last contract at the highest level, Klopp and Liverpool’s hierarchy were reaffirming the huge role that Milner plays on and, increasingly, off the field at Anfield.

This influence was underscored during Klopp’s recent and controversial call to snub the FA Cup in favour of a winter break.

Milner, who had been recovering from a hamstring complaint, politely asked the club’s then Under-23 manager Neil Critchley, if he could train with the youngsters as they prepared for their big moment under the lights at Anfield.

The veteran was a visible cheerleader behind the scenes in the run-up to that game and even took his place on the sidelines in a show of support for the next generation as they progressed against their dogged third-tier opposition. Seeing such a distinguished and seasoned senior pro on the sidelines that night would no doubt have buoyed Liverpool’s teenagers as they looked to impress and stake a claim for more regular action.

For this, he earned plenty of brownie points but this was no mere PR stunt. The 34-year-old is a committed servant to the club he joined back in 2015 and has often cut the figure of a natural leader on and off the pitch. His fitness levels and obvious love of the game are still as impressive now as they were back in 2002/03 and none of this has been lost on a manager who has benefited time and time again from the wonderful pro he inherited from Brendan Rodgers in 2015.

Having such a player on board can only pay dividends for Liverpool. Not only is he still a talented, albeit, slightly slower footballer, he is also the personification of what all good young pros should aspire to.

Additionally, in Milner, the club may have a tailor-made successor to Neil Critchley, whose departure last month to take up the reigns at Blackpool was a significant behind the scenes blow. He was highly thought of at the club’s Kirby academy and had played a part in the breakthrough of talented youngsters Trent Alexander-Arnold and Curtis Jones.

Of course, Milner’s recent contract extension was purely in a playing capacity, but the club could do a lot worse than ease their veteran into a part-time coaching role in conjunction with his first-team responsibilities.

His time as a highly touted youth prospect should grant him empathy and understanding with the club’s valuable next generation and his stature within the current first XI could offer a viable conduit for any youngster looking to make the often perilous journey from academy to senior team. There a surely fewer, better role models in the game than the Red’s current number seven.

However, it would also be wise for Liverpool to avoid losing Milner as a player in the same way that Jamie Carragher and Steven Gerrard were allowed to depart when they both still had some juice left in the tank.

Up the M62, Manchester United kept legends such as Ryan Giggs and Paul Scholes around the first-team. As such, they were able to draw on their boundless experience and professionalism in big games as well as offering youngsters a helpful reminder of what was required from them to make it at such a stellar club.

Milner could offer Klopp and Liverpool a unique and highly valuable dual role as he gravitates towards the status of elder statesman at the club. Such an admirable servant, not only to Liverpool but to the Premier League in general, his tale should be far from concluded would can only be a good thing for everyone involved.