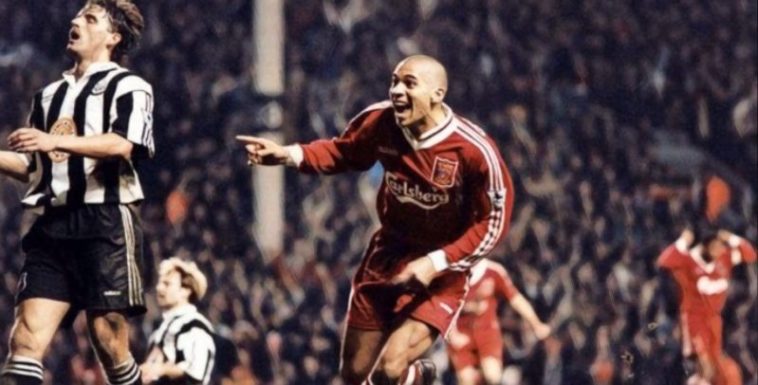 As the doors opened onto the commentary gantry the pair almost walked straight into Columbia legend Faustino Asprilla. Before Collymore could utter a word Asprilla pointed in his face and boomed: “You! You cost me my medal!”

The former Magpies winger was, of course, referencing that famous night at Anfield on April 3rd 1996 when two free-flowing sides; Liverpool under the stewardship of Roy Evans and Kevin Keegan’s Newcastle United locked horns. It was a clash between wonderful entertainers that would go on to be voted by Sky viewers as the greatest Premier League tie of the decade back in 2003.

As Asprilla would bemoan 18 years later, the match went some way to destroying Newcastle’s title bid but it was also one of the most formative moments for a league and product that was still very much in its infancy.

By 1995-96 English football was changing. Foreign stars were complimenting the more established domestic players as the game’s evolution gathered pace. Clubs were richer and bolder in the transfer market and a more expansive brand of football was being served up to supporters who gorged themselves on Sky’s extensive and bombastic coverage.

Keegan’s Newcastle team of the mid-nineties perhaps perfectly sum up, better than any other side of that era, the new and exciting brand of football. The former England manager later admitted he didn’t think much of tactics and favoured letting his flair players off the leash. But to dismiss him as a naive dreamer is a tad harsh despite his failure to win major silverware.

Schooled by Bill Shankly in the fine arts of football identity and instilling a sense of pride in the players at his disposal; Keegan understood the DNA of the game. Upon talking up the reigns at Newcastle in 1992, he would spend around £6,000 of his own money in upgrading the dismal training facilities he had inherited as he looked to modernize.

Off the field, the new manager spoke of the stars of yesteryear and of his desire to reinstate St James’s Park to the summit of English football. His big personality and zeal for attacking football paid dividends as the club recovered under the guidance of their prodigal son. By that auspicious evening in 1996, less than three years after their promotion back to the big time, King Kev’s Newcastle went to Anfield knowing a win would take them top of the table with just eight games remaining.

However, this is only half the story. The season looked to be done and dusted by January with the Magpies waltzing through the league with their cavalier football sweeping everyone aside and delivering them a healthy 12 point lead at the top of the table.

Whether through a fatal bout of nerves or a lack of genuine tactical know-how, Newcastle wobbled and allowed Alex Ferguson’s Manchester United to usurp them at the top of the table. Some point the finger at Asprilla’s transfer from Italy in January disrupting the balance of a good team. Yet to pin the blame solely on one player is harsh when you consider their poor form actually began before the Colombian’s arrival.

Arriving on Merseyside, all was not lost for the Magpies. Two games in hand on Manchester United meant a win at Anfield was not critical but playing for a draw was simply not in Keegan’s managerial playbook.

The 90 minutes that ensued that night would pass into football folklore. Newcastle’s international flair of David Ginola and Asprilla was matched by the homegrown talents of Robbie Fowler and Steve McManaman.

Neither side had any notion of defending as the goals flowed. Each time the ball flew past either keeper the balance of the game was altered and left on a knife-edge. The tempo was as frenetic as it was unyielding. Three goals in the opening 15 minutes set the tone for a breathless encounter. Three more quick-fire goals in the second half saw the sides locked at 3-3 as the end of the ninety approached.

Stan Collymore’s powerful stoppage-time finish at the near post sent Anfield into raptures and left Newcastle’s side deeply wounded in the title race as they slumped to another costly defeat.

For Sky’s producers and directors, it was manna from football heaven. Under the lights at one of the country’s most famous grounds, their cameras had just captured the finest match of the new Premier League era.

Every angle was caught, from Jason McAteer battling to contain Ginola, to the despair etched onto the faces of distraught fan’s when Collymore pulled the scores back to 3-3. The camera crew raced onto the field to record the jubilant Liverpool players up close and personal whilst the drama had been beautifully narrated by Martin Tyler’s shrill tones and that immortal line for the match winner.

The tussle and drama marked a crossroads in the history of the Premier League. The game was emerging from the archaic days of the old First Division and the embers of that era still bore a mark on this fixture. A shocking playing surface, old-fashioned player’s number cards used for substitutions and Ian Rush coming off the bench with five minutes to play, more than echoed a bygone era.

However, the one touch rapid football orchestrated by skilful modern players schooled in a new way of attacking and perfectly complemented by Ginola’s flare and Aprilla’s tenacity, make this game stand out as a watershed moment in the evolution of the English game.

Of course, there had been high drama in the sport before, but this was on another level. Teams would often cancel each other out, or edge a win in a tense game of cat and mouse on the pitch. If there were high scoring matches, they were often one-side affairs. But here, less than four years into the new Premier League era were two splendidly attacking and well matched sides prepared to throw caution to the wind and play some of the most expansive football ever captured on live TV.

Fans were enthralled by what they had seen. This was a match attended by 40,000 spectators, but there are thousands more on Merseyside who claim to have been there on that famous night. For others watching live in pubs and living rooms across the nation, they were captivated by the action.

Liverpool fans spoke of a return of those European nights under the lights at the famous old stadium after a near decade hiatus. The match was headline news across the globe as the title race was thrown wide open and neutral fans eulogized about the attacking football on display.

More than any other, this game helped establish Sky Sports as the essential accompaniment to the drama and top quality football that the new league had to offer in a period of unprecedented growth for the English game.

For two ex-pros from opposite corners of the world, to meet by chance on the gantry of a football stadium in South America and cite a midweek league match that they contested nearly two decades earlier is testament to the development of the Premier League as a truly globalized institution. That staggering growth and high TV drama has its roots deeply embedded in that crazy game of wonderful football at Anfield.

Read – Moments that made the Premier League: Man United snare Cantona from Leeds