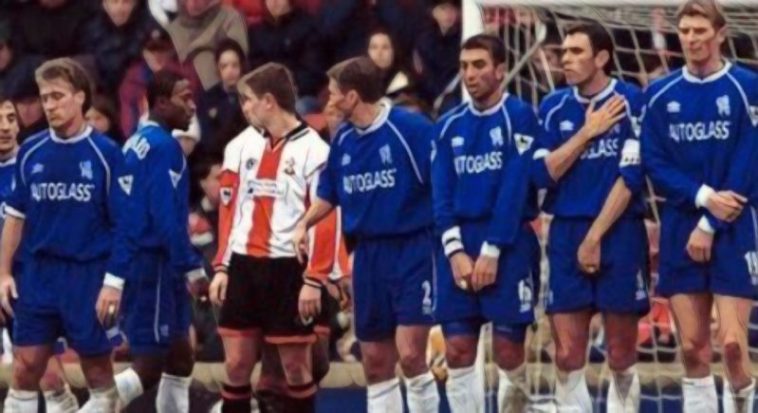 The first thing the Chelsea players noticed as they trooped into the old, narrow player’s tunnel at The Dell was the large number of journalists and reporters milling around. By Boxing Day 1999, Chelsea were something of a blockbuster name in the Premier League, but their trip to Southampton who were veterans of the relegation dogfight had the feel of a mismatched, rather mundane fixture that was only going to end one way. Why all the journos then?

Little did the starting XI know it at the time but they were breaking new ground in the Premier League. Indeed, in the history of English football they would forever be the outriders; the first all foreign starting XI ever picked for a competitive match on these shores.

A team-sheet had been handed out prior to kick-off and all of a sudden this match was big news. Here marked the moment when the Premier League finally saw the balance of influence tip undoubtedly away from the old homegrown stalwarts of the First Division era.

The proximity of the fixture to the new millennium is very apt. Already half-way through its eighth season, the Premier League had transformed much of the football landscape forever bringing in new wealth and confidence to its member clubs.

Budding excitement about what lay in store for the new century had captured fan’s imagination. However, there had been some gripes about the number of foreign players infiltrating the game and what that may mean for the future of English football’s homegrown talent.

In so many ways, Chelsea embodied this growing sense of change and cosmopolitanism that had been emerging from around the continent to influence the new league.

Their sides of the late nineties inspired first by former Netherlands forward Ruud Gullit and subsequently by Italian star Gianluca Vialli, bore a special place into the hearts of purists everywhere. Their free-flowing attacking flair was initially only lightly complimented by their cohort of overseas talent, with a British core still massively influential. However, like so much around them, this was changing and the pace of that change was gathering steam.

On the opening weekend of the first ever Premier League campaign, just 13 non-British or Irish players contested a ball in anger. The competition was very Anglicized in those fledgling weeks and months but it was not to last.

From the inspiration Manchester United drew from the mesmeric skills of Eric Cantona to the delightful individual Brazilian flair of Middlesbrough’s Juninho, fans had been slowly waking up to the benefits of foreign imports.

Yet, while some played a fulcrum role, others were seen as either a luxury item on the field or worse still, a corrosive influence on the side. The narrative that emerged suggesting Colombia international Faustino Asprilla somehow cost Newcastle the league title in 1996 can be seen as an example of this early scepticism.

While it is certainly true that there were some disruptive figures, such as Pierre van Hooijdonk’s disgraceful antics that contributed to Nottingham Forrest’s relegation in 1998/99; by and large the arrival of new and exciting internationals was positive. They helped to innovate and improve the level of football on display every weekend as well as adding to an increasingly global audience tuning into the English game. To underscore this growing influence in the division, three of the first five winners of the Premier League Player of the Year award were overseas stars.

Chelsea were at the vanguard of this evolution with the West London club enjoying a golden era of success with an increasingly globalized squad. Perhaps it helped that in Gullit and Vialli the club had successive foreign coaches who were used to operating in continental leagues with porous borders, where foreign imports were not treated with the same curiosity or scepticism.

Indeed Vialli was positively bemused by the fervour he caused in the media after he selected his all foreign starting XI at Southampton. When asked what his thoughts were as to the significance of the event, the Italian played things down stating:

“It makes no difference as long as we talk the same language on the pitch. We had a few players out and unfortunately a few of them were English — but nationality is not important.”

“During the game I don’t think any of us thought anything of it. We were used to playing with players of different nationalities, but we all spoke English in and around the training ground, so to us the nationalities meant nothing at all.”

The media attention remained on Chelsea, until of course a better story emerged from elsewhere. However, despite the cross-examination and scrutiny Vialli named the same team to face Sheffield Wednesday just three days later.

The Italian would lead the Blues to FA Cup glory that season as well as the last eight of the Champions League, falling in extra time to Barcelona at the Camp Nou. His approach was vindicated as the fans soaked up every morsel of their success and emerging status in the game. Moreover, foreign players heavily outnumbering their domestic teammates simply ceased to be an issue for the club and fans on the terraces.

Despite Vialli’s nonplussed reaction to what he viewed as a mere technicality, there can be little debate that a door had been opened by Chelsea during that otherwise uneventful fixture on the south coast.

Top six football remained at Stamford Bridge in the seasons to come as did European qualification. In addition, the club continued to benefit from classy continental imports with the likes of Gianfranco Zola and Marcel Desailly influencing English youngsters like Joe Cole, Frank Lampard and John Terry as they emerged into a very gifted and fiercely competitive side.

Chelsea were referred to as the Foreign Legion, while some made dismissive jokes about Euros being accepted as legal tender at Stamford Bridge, but increasingly attitudes of this ilk belonged to the insular, inward looking past.

The honours won by Chelsea and the adulation of the supporters towards that generation of players was proof in itself that accents and passports were simply no longer an issue for most, while success was paraded out in front of them.

Leeds United, Liverpool and Arsenal would all go onto achieve success at that time using foreign players and managers at the heart of their tactical master plans. A changing of the guard had taken place, the Premier League would forever be seen as a cosmopolitan melting pot of imported talent. What started with a trickle would go onto become a rushing torrent, although there can be no doubt that the dam well and truly bust at The Dell back on Boxing day 1999.

Moments that made the Premier League: Sky Sports blow them out of the water to usher in new era

Moments that made the Premier League: Man United snare Cantona from Leeds

Moments that made the Premier League: Wenger stays silent as a football dynasty is founded