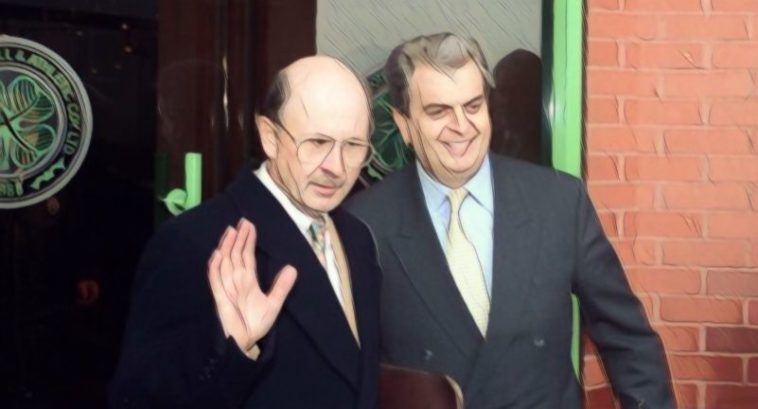 In the summer of 1986, Graeme Souness came home to Glasgow from Italy and was unveiled as the new Glasgow Rangers player/manager. Flanked by Chairman David Murray and Chief Executive David Holmes in the aptly named ‘Blue Room’, revolution was in the air.

With English Clubs banned from Europe due to the Heysel tragedy, Souness went about luring the cream of English football to Ibrox. Souness smashed the Ibrox wage structure to prise the likes of Terry Butcher, Chris Woods and Graeme Roberts north of the border whilst breaking down years of religious bigotry with the signing of Catholic and ex Celt Maurice Johnson from under the noses of rivals Celtic.

He amassed three league titles and four league cups within five years and aided Murray’s purchase of Rangers; whilst laying the foundations of the glorious nine in a row era led by his right-hand man Walter Smith.

On the other side of the great Glasgow divide there was trouble in paradise, the double of 1988 in Celtic’s centenary year had not been built on and fans were dismayed at the success and buying power of their great rivals.

In 1991 Willie Wilson a Celtic fan from Clydebank setup an invite only meeting in Shettleston Town Hall, a neighbouring district of Parkhead. As Wilson rose to address the crowd in the hall, he was joined by three hundred like minded souls and so the group ‘Save Our Celts’ was born.

Their aim was to pressurise and dethrone the Kelly-White dynasty at Parkhead or as Wilson and his comrades saw them as “the old incumbents on the Biscuit Tin board”.

The group garnered support among the green and white faithful and larger rallies took place with special guest speakers. On one such occasion sacked board member Brian Dempsey took to the floor, stating to all and sundry “Go that extra mile to achieve what we want and deserve as the paying customer”.

Lisbon Lion Jim Craig also spoke at one of the rallies and legend has it that he lost his role as an analyst with Radio Scotland due to his presence at the gathering.

Sadly, just as the group began to prosper, Celtic on the pitch hit a purple patch including the St. Patrick’s Day Massacre of March 1991 over their bitterest rivals. Spirits among the Celtic fans began to rise and so saw the demise of the protest group.

Disparaging comments from the Glasgow Celtic board in the official club newspaper did not help the cause and the lack of support of George Delaney (General Secretary of the Celtic Supporters Association) who refused to attend any of the groups meetings was detrimental also. It was all very disappointing and it would take three further years for the board to be brought down.

However, Wilson had stirred the rebels and in the shadows were a quintet who would help shape the success and future survival of Glasgow Celtic – they were Matt McGlone, Brendan Sweeney, Colin Duncan, Dave Cunningham and John Thompson.

From the ashes of ‘Save Our Celts’ came ‘Celts For Change’ in 1993; as Celtic floundered on the pitch those in the boardroom seemingly watched with blinkers on.

The group’s aim was to push for change within the club as things had deteriorated since 1991, it was felt if they failed the club was going to fail alongside them.

Like Wilson’s idea the group set up rallies in town halls with initially low numbers attending, however, word spread which saw numbers swell to the hundreds for these functions.

Demonstrations were also held outside The Bank of Scotland head offices which drew interest from media circles promoting the group’s cause and empowering them among the Celtic fans as a group they could vent their anger through.

On the 1 March 1994 the group announced a boycott of the home game versus Kilmarnock. Unknown to the board the group employed a member at each turnstile to count the numbers attending the game at Parkhead.

The rebels announced an estimate of 8,225 attended the game whereas the club announced the official attendance of 10,055. Back then the 10,000 figure was a break-even attendance requirement for the club to remain operationally profitable, so this figure was key.

In the eyes of the group and their supporters, the level was breached, and they believed the action to be a success. Similar to the previous group the ‘Celts For Change’ found an initial lack of support from the Celtic Supporters Affiliation & Association groups for their actions – some were disgusted by the ‘ Back the Team Sack the Board’ demonstration on the Jungle and the boycotting of Celtic matches.

But as the final curtain fell on the Kelly-White dynasty and the end game was played out by the shareholders and financiers; the ‘Celts for Change’ group had laid the foundations for the rebel shareholders to lead Glasgow Celtic football club into a new era.

Without the courage of these people, other outside investors could have come in and would have acted as vultures after waiting till the club entered administration.

On the 4 March 1994, Fergus McCann and Brian Dempsey stood on the steps of Celtic Park and announced “the rebels have won”. . . revolution was in the air.

Read Also – The Battle of Oriel Park: When The Troubles and football collided