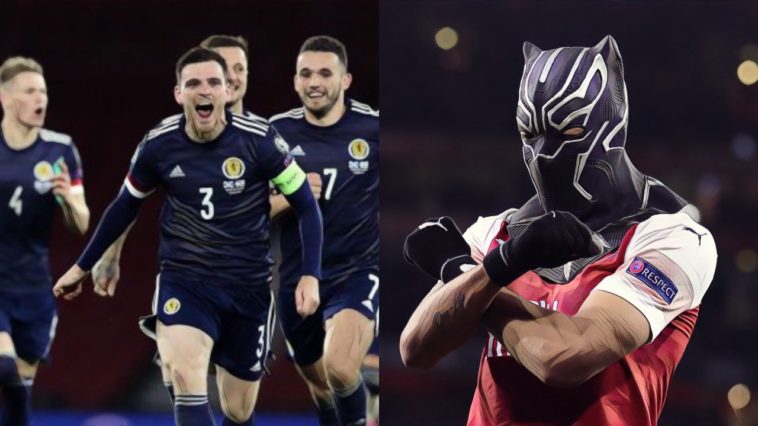 The funniest tweets from the world of football this past week, featuring Scotland reaching Euro 2020, Pierre-Emerick Aubameyang feuding with Toni Kroos over silly celebrations, the return of Gunnersaurus, and Northern Ireland’s baptism machine.

Scotland qualified for their first major tournament since 1998, although goalkeeper David Marshall had to make absolutely sure his penalty save was allowed.

Nothing is more Scottish than something good finally happening and having to check that it’s definitely happened before allowing yourself to enjoy it pic.twitter.com/oCeloqcZQw

The loveliest thing about that wasn’t David Marshall pulling off the biggest save of his life, it was him checking to see if it was ok before daring to celebrate pic.twitter.com/SvJf3vo01N

David Marshall got all the plaudits, but please recognise who the real hero is here.

I believe in in my powers. Well done Scotland I’m inviting you all to my private Scottish Island for more inspiration Lamb Island. ❤️ Uri pic.twitter.com/3bjh9hRiwr

We don't know if you've heard, but Thursday night was a bit special.

While there weren't #scenes in the stands, there certainly were in living rooms around Scotland.

Unless you're the fella in the last clip… 😅#NoScotlandNoParty pic.twitter.com/re1Vwgk9zI

Naturally some of them hit the streets too.

Next year’s Euros are going to be fun, I think.

would hate to be andy murray’s neighbours 😳 pic.twitter.com/tL6GvNuaUW

Remember remember, the 12th of Movember.

Allowing Scotland to qualify for Euro 2020 was the best way to accelerate a vaccine, every lad from Gretna to Wick will be cracking out his chemistry textbook if it means they can call Harry Kane a bawbag come June 18th.

Even the English can be happy for them, until they meet next summer of course.

Congratulations Scotland !
I know you hate us but I was pleased for you 😂😂

Northern Ireland fans were allowed attend their Euro 2020 playoff with Slovakia, but they took every precaution ahead of kick-off.

Toni Kroos started a beef with Pierre-Emerick Aubameyang after saying the striker’s mask celebrations were silly.

By the way
Does this @ToniKroos have Kids?
Just to remember i did it for my son few Times and i will do it again
I wish you have Kids one day and make them happy like this Junior School pupils Talk 🙏🏽👊🏽 and don’t Forget #maskon #staysafe 🤡bis https://t.co/J4ZF1XGlsU

The Fantasy Faithful podcast: Which Premier League teams are actually any good?

But the Arsenal striker can’t be beaten, not online anyway.

Send @ToniKroos congratulations for his 3 Kids cordially your Batman and Robin https://t.co/JUOYPhuC0X

Plus he found back up in the form of his Arsenal teammate.

In the end, it was Kroos who comes out looking the sillier of the two.

At least we got to see the return of Gunnersaurus this week.

Back at Emirates Stadium today 👍 pic.twitter.com/NF7FcNWYhI

Although it was tinged with sadness all the same.

Gunnersaurus – Time for some clarity and closure pic.twitter.com/sGqSb4T3q8

Maybe it wasn’t such a good idea for Mo Salah to be in the thick of it at his brother’s wedding in the middle of a pandemic.

This thread about finding a last minute replacement for the MLS Supporters’ Shield is brilliant.

This is the story of how a Captain America shield, complete with 150 lb force magnet, became the Supporters' Shield.

I'm told the true, forged by the supporters Shield didn't arrive from LA in time, so the @PhilaUnion got creative. pic.twitter.com/nld62pyGzi

See Also: Five of the worst penalties ever taken in English football history