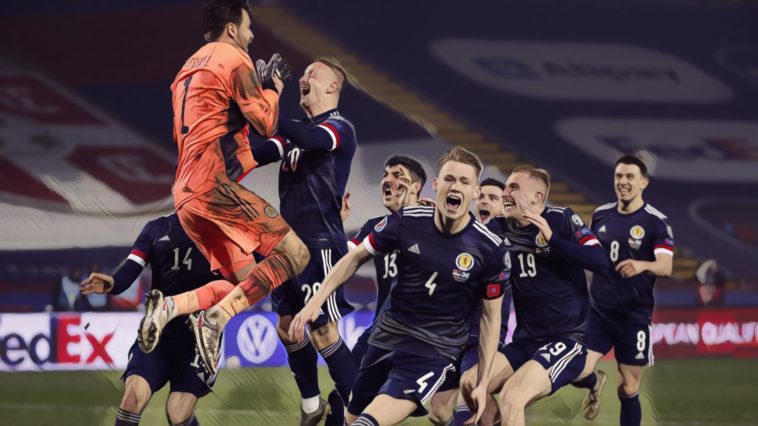 Gareth Southgate admits he is relishing a ‘humdinger of a game’ after Scotland’s qualification set up a huge clash with England at next summer’s European Championships.

Scotland qualified for their first major tournament since the 1998 World Cup after defeating Serbia on penalties in a dramatic play-off clash, with Steve Clarke’s side now set to join England, Croatia and Czech Republic in Group D.

Scotland’s success has now set up a fascinating clash between the old rivals on June 18, the first major tournament meeting between the two Home Nations since Paul Gascoigne’s wonder goal helped England to a 2-0 victory at Euro ’96.

Southgate was part of the Three Lions side that day and will now lead England into another tournament meeting with Scotland as manager, admitting he is relishing what he hopes will be a ‘fantastic occasion’.

“What a game. That makes our lives more complicated for sure,” Southgate told BBC Radio 5 live.

“It will hopefully be a fantastic occasion with fans, but that’s the one thing none of us can control.”

Scotland’s qualification has ended a wait of more than two decades to play at a major tournament and was greeted with jubilant celebrations in Serbia, Southgate praising the job Clarke has done with the national side and anticipating a difficult clash against an emerging term.

“I’m delighted for them,” he said.

“I’m particularly pleased for Steve Clarke. He’s a great guy and has done a great job. That will be a humdinger of a game.

“They’ve got a team that is improving quickly with a lot of players who have emerged in the last two or three years. The likes of John McGinn, Scott McTominay, Kieran Tierney, Andrew Robertson.”

England began their international break in fine style with a comfortable 3-0 victory over Ireland at Wembley, goals from Harry Maguire, Jadon Sancho and Dominic Calvert-Lewin securing victory for Southgate’s side.

The Three Lions next travel to face Belgium in the Nations League on Sunday, before a home meeting with Iceland in midweek.