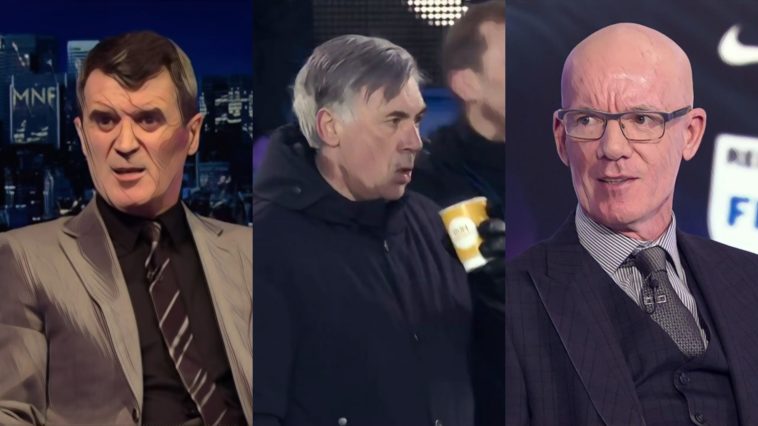 The funniest tweets from the world of football this week, featuring Carlo Ancelotti remaining the coolest man on Earth during an extra-time winner, Roy Keane becoming a man of the internet, Dermot Gallagher’s Irish accent and Liverpool’s season falling off the rails.

Micah Richards did everyone a service by showing Roy Keane that Twitter video.

A lot of fans asked me to show Roy a funny video from TikTok and I wasn’t going to let you all down… I just can’t play you the real audio 🤣😡 pic.twitter.com/a4BbKH8UBo

This is a step too far, though.

Oi @MicahRichards can you share this with Roy? I reckon he’ll love it pic.twitter.com/LtOkOmWeCd

Only Keane could look so menacing while trying to take a happy selfie.

Null and void, anyone?

Alright who did this pic.twitter.com/mqbLuSlC1n

With a name like that, we should have known Dermot Gallagher was as Irish as they come.

"I have to crank it down a bit for English people"

“As always we’ve got former Premier League referee Dermot Gallagher with us this morning.” pic.twitter.com/8eQ8fkaVUE

That one guy on the sideline no one dares go near.

elton john looks like he's about to come onto the pitch and batter the ref at his grandson's under 8's football match pic.twitter.com/iNArLl3RyV

Rookie mistake by Barnsley not having a backup account ready to go.

Trying to find space in midfield playing against Ndidi.pic.twitter.com/D3MST31Boh

Me when there’s a slight draft in the house:

Rui Patrício is all of us right now! 🥶

The perfect example of how to wrap up warm 😂#EmiratesFACup pic.twitter.com/YPcINEyAJO

See Also: The longest winning runs in English domestic football: From the 19th century to the present day