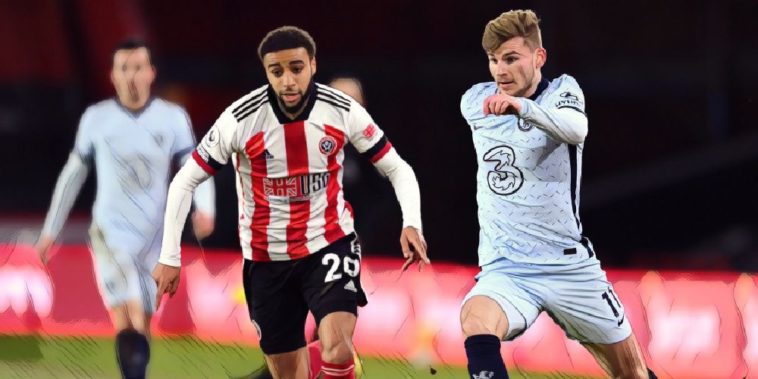 Chelsea moved to within a point of the top four with a 2-1 win over Premier League strugglers, Sheffield United, at Bramall Lane.

The division’s bottom club did have a couple of decent opportunities in the first half, with Oliver Burke hitting the side netting in the first minute following a loss of possession in midfield, while the Blades were also awarded a penalty for a foul by Ben Chilwell on Chris Basham, only for VAR to rule the defender to have been offside in the buildup.

Chelsea got themselves in front just before the interval though, some good work from the Blues’ down the left seeing Chilwell release Timo Werner who made a driving run into the channel. The German cut the ball back to Mason Mount who fired low across Aaron Ramsdale with a smart first-time finish with his weaker left.

Sheffield United were, however, level within nine minutes of the restart as Chelsea conceded in somewhat comical circumstances. Oli McBurnie’s loose pass into the box was poked back toward Edouard Mendy by Antonio Rudiger, although it seemed like the German defender hadn’t seen his ‘keeper coming to collect the ball, which agonisingly trickled into an empty net.

Parity would last less than four minutes though, Timo Werner racing into the box following a poor backpass, knocking the ball past Ramsdale before being brought down by the Blades ‘keeper. Referee Kevin Friend initially gave nothing, but after reviewing the pitchside footage, he pointed to the spot, with Jorgingo stepping up to despatch the resulting penalty with ease.

Overall, it wasn’t a game that will live long in the memory, though speaking afterwards, Chelsea boss Thomas Tuchel felt it was a deserved win for his side against a difficult opponent.

“We arrive in February in Sheffield you know what’s waiting for you,” he told Sky Sports. “It feels like a cup game when you arrive here, against a team that are full of energy and very direct and physical you have to accept that not all moments are easy in the game. We stayed positive all the time with some difficult moments to overcome. Deserved to win in general happy with that and from that you build confidence and it’s always easier to proceed.

“We had some moments where we could control the game in the middle, where we found the solution under pressure we had some easy ball losses where we played a bit too much. The solution would’ve been in the front or middle to calm things down. First 10-15 minutes were difficult to overcome because they started with a lot of courage, we were lucky with the penalty [against us].”

Timo Werner has had plenty of critics since moving to England, the striker last finding the net in the Premier League back in mid-November, though Tuchel feels like the Blues number 11 will soon be back firing after being involved in both goals.

“When he plays like this we are happy it was a big step forward,” he said. “He won the decisive pen against Spurs and tonight, for the first goal it was an amazing run and assist. Goals will come if he carries on like this.”

Rudger’s own goal was the first time Tuchel has seen his side concede since his arrival, and while he was disappointed with the mix-up, he was pleased with his side’s almost immediate response.

“Still no goal from the opponent, we did it ourself,” he said. “We lacked concentration and communication in that moment. It should not happen but it happened, we have to accept mistakes. Happy with the response that it did not cost us points or confidence so the response was good and we can learn from that.

1 – Chelsea have only conceded one goal in their first four Premier League games under Thomas Tuchel – their fewest through a manager’s first four league games in charge since Guus Hiddink in February/March 2009. Resolute. pic.twitter.com/M5u2kWFZxQ

Asked about his early impression of the Premier League compared to his experiences in France and Germany, he added: “The type of football is physical and tougher and there is a lot of quality and during matches it never stops.

“You feel the absolute spirit to give everything in every match it brings out the best in every player and it’s a pleasure to coach every game because this is what we love and what I love and so far things are going well and we are happy.”

Next up for Chelsea is another trip to South Yorkshire for their FA Cup fifth round tie against Championship side Barnsley, before they face Newcastle in the league next weekend.

Tweets of the Week: Dyche’s lookylikeys, deja vu for Southampton, and the Carlisle curry