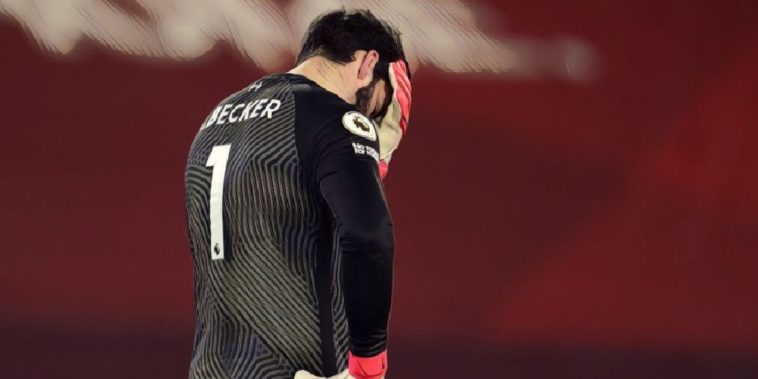 Liverpool’s title defence looks all but over after the succumbed to a 4-1 loss at Anfield to league leaders, Manchester City.

It was a sloppy and uncharacteristically slow start by Liverpool who looked loath to press their opponents, though they did have the best chances of the opening half-hour, a Trent Alexander-Arnold cross finding Sadio Mane who sent his header over the bar, while Roberto Firmino forced a save out of Ederson with a dipping volley.

Man City would, however, be offered the chance to take the lead after being awarded a 35th minute penalty, Raheem Sterling being brought down by the trailing leg of Fabinho. Ilkay Gundogan has been an influential figure in City’s excellent run of form, though the German stepped up and blazed his effort high and wide into the Kop as the Citizens’ relatively poor record from the spot manifested itself once again.

All in all, the first half was somewhat of a snooze fest, though within four minutes of the restart, the Premier League leaders took the lead. Raheem Sterling ran at Alexander-Arnold, before squaring the ball to Phil Foden, the England international seeing his effort saved by Alisson, though his parry fell straight into the path of Gundogan, who made amends for his penalty miss by firing home the rebound.

Liverpool did pull themselves level just after the hour mark, Mohamed Salah getting in behind the usually imperious Ruben Dias, the Man City summer signing pulling the Egyptian down in the box, with the league’s top scorer despatching the resulting penalty down the middle of the goal.

Having started through the middle, Pep Guardiola moved Phil Foden to the right, and the move paid instant dividends, the 20-year-old pouncing on a dreadful clearance from Alisson, dancing past the Liverpool defence before squaring it to Gundogan who tapped City ahead from inside the six-yard box.

Minutes later and Alisson was at it again, the Brazilian – under minimal pressure – playing a pass straight to the blue shirt of Bernardo Silva, who lifted the ball over the Reds’ ‘keeper with Raheem Sterling diving to head the ball home.

🔝 City secure their first league win at Anfield since 2003 to open up a five-point lead at the top of the table pic.twitter.com/4e8rvKB6eA

Having been involved in the first and second, Foden then netted one of his own in superb fashion, substitute Gabriel Jesus switching the ball out to the right before the City academy graduate fired home a venomous strike from a difficult angle having taken on Robertson.

The result means Liverpool have now lost three home games in a row and leaves them 10 points behind City, who still have a game in hand.

Despite the heavy loss, Klopp insisted his side had played ‘brilliant’ football for a large part of the game.

“Big part of the game was a brilliant game from my side,” he told Sky Sports‘ Geoff Shreeves. “I can see in your eyes you see differently. I really liked it.

“First half played really good football. Second half, City changed the system slightly. A little adaptation and we would be in the game again but in the start of the second half we did not give enough options to play and gave the first goal away.

“We gave them too much opportunity. They scored that goal, we scored the equaliser. We were good again but then made two massive mistakes that is clear. At 3-1 down at this level, it is tough to take and then Foden with a genius situation for the fourth goal.

“If we play football like we did for a long time tonight then we will win football games, 100%.”

3 – Liverpool are the first side to lose three straight home league matches in the following campaign after winning the English top-flight since Chelsea did so almost 65 years ago back in March 1956. Throwback. #LIVMCI pic.twitter.com/UDJymBGlUV

Klopp was keen not to attribute blame to goalkeeper Alisson, despite his role in City’s second and third goals.

“It is true as well we did not give him a lot of options, especially the first one. Second yeah, he just mishit the ball, maybe he had cold feet, it sounds funny but I don’t know the situation. He has saved our lives many times, no doubt about that, tonight he made mistakes.”

Asked if his side were now in a battle to finish in the top four, the German added: “We will try everything. There are enough games to play to secure that but we have to win games.”

Liverpool now have a week to regroup before facing fellow top-four hopefuls, Leicester, next weekend.

Read – Has the last two windows seen Liverpool depart from their impressive approach to transfers?