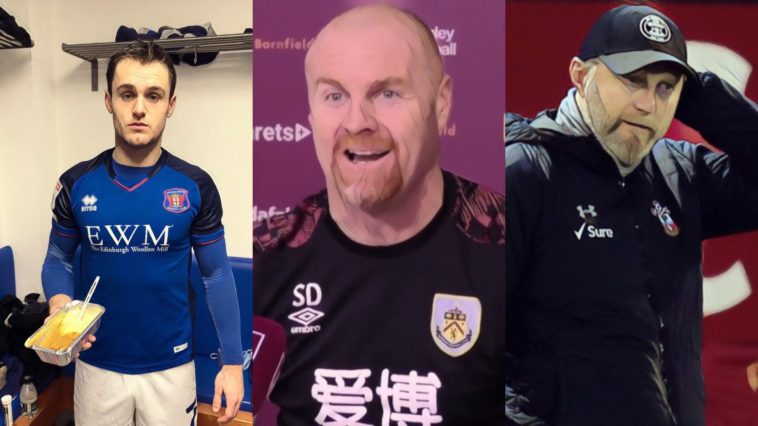 We think Dyche officially lost the plot at the moment he began talking about lookalikes.

The greatest #PremierLeague press conference of all time! 😂

Burnley's Sean Dyche went OFF THE RAILS in this chat with journalists ahead of tomorrow morning's match with Man City! 🤣#OptusSport #PL #BURMCI pic.twitter.com/7MWvK09nAx

Whenever I see a 9-0 scoreline in the Premier League: pic.twitter.com/7W2poh2lmk

Does Gareth Southgate have too many creative midfielders to select from for England?

You can count on football pundits to make the analysis of a momentous match absolutely unenjoyable.

Now let’s check in on the ‘Has the 9-0 been mentioned yet?’ account:

We have so many questions for Carlisle United. How did this tradition start? Who decided on a curry? Why does Joe Riley look so miffed about it? The world deserves to know.

Win, lose or draw, Carlisle United award their Man of the Match with a takeaway curry after the game. Joe Riley’s face when he received a Korma after their 2-1 defeat last night has done me. Incredible pic.twitter.com/G8MrLIlXZR

This simply does not compute.

The ten best Premier League goals of the nineties

Never refuse a golden opportunity to promote your brand.

Peter Walton was on hand to give his completely impartial take on the incident.

“If Soucek is going to insist on having limbs then he’s his own worst enemy Jake” pic.twitter.com/VuDCPr6E8k

Congrats to our new players @Joewillock and Sam Maximus for their game ! @PaulMerse told me that you did well guys 👏🏾

From Saint-Maximin to Crouchy, the ten must-follow footballers on Twitter

Jesse Lingard confirmed his GOAT status with a stellar performance against Aston Villa.

Everyone gangster till a real gangster walk in the room pic.twitter.com/pWTIMRB9eg

Every team needs a psycho.

Sometimes I look like psycho on the pitch 🙈😂 but always do everything for the team. Everyone was brilliant today well done lads !!! Keep going IRONS ⚒ pic.twitter.com/WC11tQ5PKE

A great point that I had never considered.

I’ve said this before, but Steve McManaman is actually a very good commentator considering he watches different games to what he’s commentating on

The first of many Ballon d’Or awards for Amad Diallo, of course.

Hermes have made me look like I’m a new signing for Asos. pic.twitter.com/RR4vAa06rB

Read: Edinson Cavani, the luckiest signing of the season, has been an ideal fit for Man United