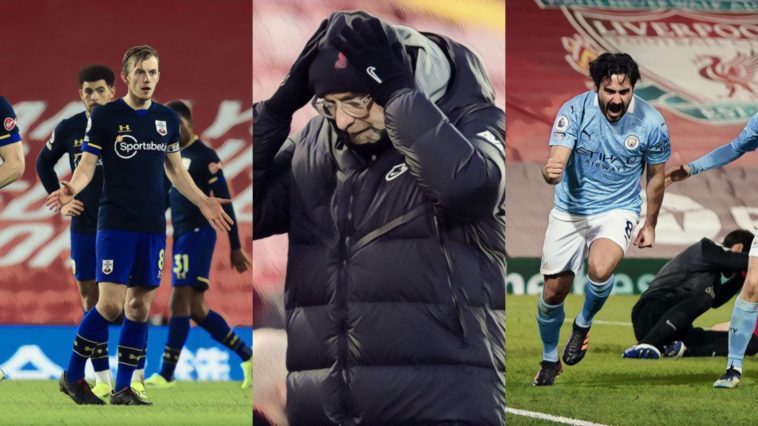 As we do every week, we dissect the standout statistics from the past seven days of Premier League action and see what they mean.

This week we look at Liverpool’s losing run at Anfield, the scourge inflicted on Southampton by another 9-0 defeat, Thomas Tuchel’s strong start at Chelsea, Aston Villa lording it over Arsenal, and a piece of away day history.

Manchester City defeated Liverpool 4-1 on Sunday night to give themselves plenty of legroom on the drive to a third Premier League title in four years. The league leaders are now five points clear of the next nearest team at the top and ten points ahead of the reigning champions.

The Reds have now lost three home games on the bounce after going an astonishing 68 games unbeaten at Anfield. That is the first time it has happened since 1963.

After having the best defence in the league last season, they have conceded 29 goals in 23 matches, four more than they allowed in the entirety of 2019/20. Only Manchester United have conceded more (30) amongst top ten teams.

Man City are now on a 13-game unbeaten streak, winning 11 of those ties, the longest current run among all top-flight teams. In that time they have scored 31 goals and conceded just three.

One of the leading lights during that run has been Ilkay Gundogan, who is the top scoring player (9) in the league since the beginning of December. Remarkably, all of his league goals this season have come since 15 December.

Raheem Sterling’s goal was his first against his former team and his sixth since the beginning of December. It was also his 100th under Pep Guardiola, making only the third player to reach a century under the Catalan tactician. Only Lionel Messi (211) and Sergio Aguero (120) have found the net more often under his watch.

A permanent scar now resides on the collective psyche of Southampton Football Club, imprinted on their brains like a god awful tattoo that you thought was a great idea when you were halfcut on a night out. Just one word is enough to send a shiver through their very souls: “nine”.

For the second time in 15 months Southampton lost a Premier League match 9-0 when they were demolished by Manchester United at Old Trafford last Tuesday. James Ward-Prowse was the only player on the pitch for the entirety of both this game and their previous 9-0 defeat to Leicester City.

Ipswich: haha Southampton have lost 9-0 twice now and our era of shame is over. And they did it in 2 seasons in a row

Independent Adjudicator: do you know who the last top-flight team to concede 9+ twice in the *same* season were?

Jan Bednarek was arguably the player hurting the most, however. The Polish defender became the first player in Premier League history to score an own goal, give away a penalty and get sent off in the same match.

The Saints followed that up with a 3-2 defeat to Newcastle United on Saturday, their fifth league defeat on the trot. The one upside for Ward-Prowse was that he scored yet another goal from a direct free-kick, the tenth of his Premier League career. That puts one behind Cristiano Ronaldo and two behind Thierry Henry and Gianfranco Zola in the all-time list, which David Beckham tops with 18.

While Southampton conceded 12 this week, Man United scored 12 between the midweek result and their 3-3 draw with Everton. The Red Devils are the top scoring side in the league with 49 goals in 23 games.

In the post-Ferguson era, United have scored five or more goals on ten occasions. Two of those came under David Moyes, Louis van Gaal and Jose Mourinho, while eight have come under Ole Gunnar Solskjaer.

Edinson Cavani, the luckiest signing of the season, has been an ideal fit for Man United

By beating a stubborn Sheffield United side 2-1 at Bramall Lane on Sunday, Chelsea equalled their longest winning streak of the season since November; they have now won each of their past three Premier League games. This was also only the second time they have won consecutive Premier League away games this term.

Thomas Tuchel is now unbeaten in four games since succeeding Frank Lampard as manager. His compatriot Timo Werner set up Mason Mount for the game’s opening goal, his fifth league assist of the season. The striker is the team’s highest assist maker of the campaign thus far.

Chelsea now sit fifth in the table one point behind Liverpool as they prepare to face Newcastle this coming weekend.

With their 1-0 win on Saturday, Aston Villa completed a league double over Arsenal for the first time since the inaugural Premier League season in 1992-93 under Ron Atkinson.

In contrast Arsenal have lost three consecutive league games against Villa without scoring a goal for the first time since August 1920-March 1922.

Bernd Leno is the 56th different player to be sent off in the Premier League for Arsenal.

A Premier League first was achieved during the week when all five games on 3 February were won by the away team. That continued a trend this season where the visitors have been winning a higher proportion of matches than ever before.

According to Opta around 41 percent of Premier League matches have been won by the away team, a full seven percent above the previous high set in 2018/19. Given the strange circumstances surrounding the coronavirus pandemic which means no fans can attend grounds, it’s perhaps unsurprising there has been such a shift.

See Also: The Premier League transfer deals that flew under the radar in January