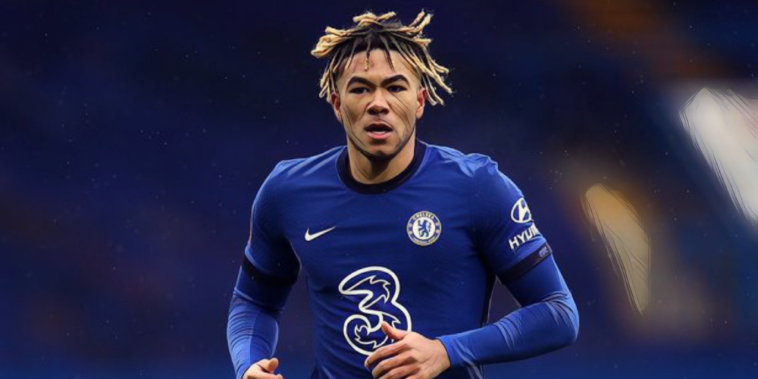 Since Thomas Tuchel arrived at Chelsea a week ago he has named two starting line-ups and Reece James has been a notable absentee in both. Having become a regular starter this season, the German manager has challenged the England international to respond.

With 17 starts under Frank Lampard in the first half of this season, James had cemented his place as the first-choice right-back at Stamford Bridge. As one of the academy graduates that Lampard was so keen to promote, this is a season that looked to be the beginning of the end for the long-serving César Azpilicueta, with the Blues aiming to faze the captain out and bring through the youngsters.

But things change quickly in football, and the 24-hour period in which Lampard lost his job and Tuchel gained one has changed the outlook of the right-hand side of the Chelsea defence.

In Tuchel’s first two games he has adopted a flexible system in which James has not been a part of. Instead of using a conventional right full-back, Tuchel has deployed Callum Hudson-Odoi as a wing-back pushing up high, and Azpilicueta as a right-sided central defender who covers the space Hudson-Odoi leaves.

It essentially becomes a back-five out of possession as Hudson-Odoi and the left-sided Chilwell or Alsonso come back to defend, but in possession they push on and Azpilicueta forms a back-three with Thiago Silva and Antonio Rudiger.

So far, it is the right-hand side that is thriving with this new balance. In Sunday’s win over Burnley, no player created more chances or attempted more crosses than Hudson-Odoi. Only Thiago Silva and Jorginho recovered the ball more times than Azpilicueta, and the Spaniard won more defensive aerial duels than anybody else on the pitch. The Chelsea captain even had the freedom to break forward and open the scoring – assisted by who? Hudson-Odoi.

The young English forward is now providing the biggest threat to James’ place in the team as he looks to become an early Tuchel favourite. After the man-of-the-match display against Wolves in Tuchel’s first game, the new Chelsea manager went on to speak in glowing terms about the player and his new position following the win over Burnley: “He can have his input on the line, he has the ability to be decisive with his runs, his speed and at the moment we have opted for this structure.”

James now finds himself in a battle to get his spot back in the team. In the more attacking position on the right that Hudson-Odoi takes up, 21-year-old James can offer his excellent pace and crossing ability but does have the flair or natural attacking instincts the more traditional winger Hudson-Odoi provides.

As for the hybrid full-back/centre-back position Azpilicueta is occupying, James’ frequent defensive lapses mean Tuchel is unlikely to trust him there anytime soon.

It might be those recent costly errors that have encouraged Tuchel to leave James out from his opening two starting elevens. In Chelsea’s Boxing Day clash with Arsenal it was Reece James who was beaten by Kieran Tierney inside the box, and then attempted to redeem himself by making the tackle from behind, only to give away the penalty that gifted the Gunners the lead in a game they’d go on to win. This has been touted as a key defeat in Lampard’s downfall.

In Lampard’s final game as Chelsea manager, the 2-0 away defeat to Leicester City, James looked to be in a good defensive position, tight to James Maddison, before the Leicester midfielder pulled away from the right-back who simply didn’t track the run that led to playmaker latching onto the ball to fire home and double the home team’s lead. It encapsulated an overall poor performance for James and would have drawn unwanted attention from the new German manager that arrived a week later.

“His progress is phenomenal. I’ve always been a big fan of his natural talent. There are things he’ll want to improve on his game and that I think he can improve on his game.” said Lampard following Reece James’ England debut in October.

The youngsters’ potential is not doubted, so Tuchel now takes over the responsibility of nurturing the talent and developing the player. The new Chelsea boss’ first move might just have been to take him out the team, challenge the player to improve, and hope to see a response.

Only three Chelsea players have had more touches in the attacking third this season than James. Only four players in the Premier League have produced more crosses. He has notched a goal and four assists from right-back, his pace and quality of delivery being a constant threat. Offensively, there aren’t too many full-backs in the league better than him.

However, Tuchel’s priority will be eradicating the mistakes James makes in his own half for the player to evolve further. A lack of concentration across a full game is not unusual for young defenders but James’ loss of focus has been happening too frequently for Tuchel’s liking.

Positionally, he also must improve. Against Arsenal, he got too close to Kieran Tierney when attempting to block the cross, meaning that the Scot can feign to pass and knock it past him into the box, where he is eventually fouled. With James Maddison’s goal, James isn’t goal-side of the Leicester runner, and never recovers his position to be able to intercept or pressure the shot.

When Chelsea visit Tottenham Hotspur on Thursday evening Thomas Tuchel is unlikely to tinker with a right-hand side that has been the notable positive from his first two matches. Reece James will have to make do with a place on the bench again.

For the player, it is an opportunity to realise the challenge Tuchel has set him, and respond in a positive manner. The talented youngster is not short of potential, and the latest threat to his place in the team might be exactly what he needs to fully unleash it and become a more complete right-back.