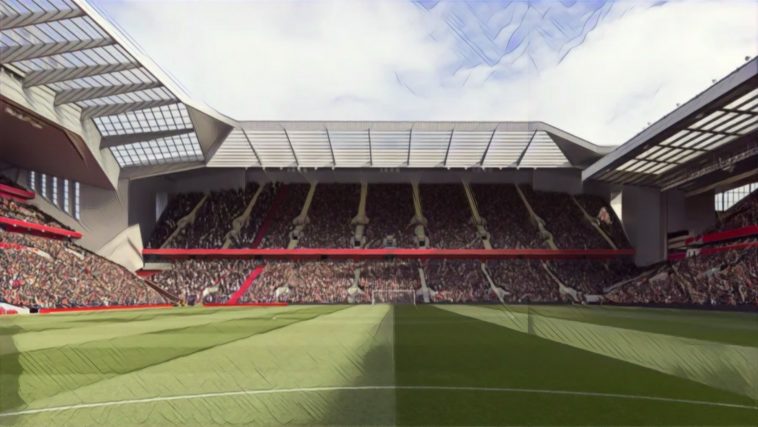 They say you can’t stop progress. The world keeps turning, life keeps moving on, and things change, for better or worse.

In football, and sport more generally, it’s considered conventional wisdom that if you’re standing still then you’re moving backwards. The game moves so quickly these days that that adage has never been more true than right now.

That’s why it’s so important for football clubs who want to compete at the top level to have state-of-the-art facilities, a stadium that supporters can be proud of and provide the revenue streams that will help the team reach its goals. A number of clubs are working hard to do just that, redeveloping their current ground or making a new one altogether.

Although the coronavirus pandemic has put these projects on hiatus, The Football Faithful has picked out some of the most impressive stadium developments and refurbishments that are either already under way or far along in the planning process.

The most exciting stadium developments in English football:

Over the past few years Liverpool have undertaken a gradual expansion of Anfield, which began with the redevelopment of the Main Stand, increasing the capacity to 54,000. Now that Phase One is complete, Phase Two will see an additional 7,000 seats put into the Anfield Road End stand. That would make the famous ground the third largest stadium in the Premier League, leapfrogging Manchester City’s home in Eastlands and Arsenal’s ground in North London.

Here is what Liverpool’s new stand will look like:

There have been discussions for years about Everton either redeveloping Goodison Park or moving away altogether. While uprooting from where the club has called home since 1892 would be heart wrenching for the Toffees faithful, it would be a necessary step for the club to try and reach the next level, i.e. breaking into the top six.

A project on the docks has been mooted for a long time and it finally looks like it is going to happen. This past December Everton sent a planning application to build the 52,000-capacity Bramley-Moore Dock Stadium at a cost of circa £500m. It is believed the new ground could open up in September 2023, although that date is obviously compromised by the coronavirus pandemic.

Here is what Everton’s new stadium will look like:

One of English football’s fallen giants of the past two decades, Nottingham Forest are desperate to “get back where they belong”, as fans of shit-but-‘massive’ clubs are wont to say. One way the organisation are hopeful of doing that is by redeveloping The City Ground.

Forest’s home since 1898, supporters have been asking when the Main Stand will be redeveloped for many years now, and it seems like their queries will finally be answered. In February 2019 the club revealed plans to replace it with a new, modern two-tier stand that will be named after club legend Peter Taylor.

In 2009 the club proposed building a stunning new ground altogether that would make it a prime candidate for hosting World Cup matches in 2018 – how did that England bid go again? – but it was slammed by the Nottinghamshire County Council, as the club wanted to build it on council land.

Five of the biggest stadiums in the Premier League

While things have been moving slower than the club anticipated, the plans for Crystal Palace’s stadium expansion are impressive. The main stand at Selhurst Park will be completely rebuilt with a stunning glass exterior featuring a barrel vaulted arch reminiscent of the original Crystal Palace building that burned down in 1936.

The gantry will be removed to improve sightlines, while the capacity of the ground will be increased by around 8,000 up to 34,000, but the real money maker comes in the form of 2500 premium level seats and up to 28 executive boxes.

Wolverhampton Wanderers have been upgrading Molineux for a number of years now, having most recently rebuilt the North Bank stand.

With Premier League football secured and an ambitious ownership running things, the club want to increase the capacity of the ground by almost 19,000 to 50,000 seats. That would make it the largest in the Midlands and the tenth biggest in the top flight. Work was due to begin this year, but all construction work in England is on hold for the moment.

Can you name the UK’s biggest football stadia?

Regularly cited as one of the best grounds for away fans to visit, Fulham’s grand old home of Craven Cottage is in the process of getting a makeover. The Riverside Stand has already been demolished to make way for a striking new stand in its place, one that will increase stadium capacity by roughly 4,000 while also giving the South West London club increased revenues through corporate hospitality.

Before building works began last year, Craven Cottage was limited to 25,700 seats, but there have always been obstacles to expanding this number. Being situated on the River Thames is one such obstacle, but an even bigger handicap is the fact that the Johnny Haynes Stand on Stevenage Road and the two-storey pavilion after which the ground is named are listed structures.

Fulham Football Club is delighted to announce that its plans to redevelop the Riverside Stand at Craven Cottage have been approved following a planning hearing at London Borough of Hammersmith and Fulham ➡️ https://t.co/4n3BQezUQA pic.twitter.com/ooa8rGOlmG

Former owner Mohamed Al Fayed caused uproar in 2001 with his plans to demolish the Edwardian structures, designed by famed stadium architect Archibald Leitch, and replace them with a new 30,000-capacity stadium. At that point the ground still had standing areas, which, after the publication of the Taylor Report in 1990, was not allowed in top flight stadia. The club ended up spending several years groundsharing with QPR at Loftus Road.

Brentford are due to leave their beloved Griffin Park, famous for having four pubs on each corner, at the end of the season, although it’s anyone’s guess when that will be.

The Bees will be moving less than a mile down the road to the brand new, more modern Brentford Community Stadium that will seat over 17,000 fans and be situated right next to Kew Bridge station. The Championship outfit, who will groundshare with rugby club London Irish, are making the move as part of ambitious plans under owner Matthew Benham to eventually reach the Premier League.

Named the world’s greenest football club by FIFA, it is little surprise that the world’s first carbon-neutral club are also leading the way with an innovative plan for their new stadium.

Forest Green Rovers will be moving from their current home in Nailsworth to a 5,000-capacity Eco Park stadium near Junction 13 of the M5, and it will be entirely eco-friendly and constructed of timber.

The new stadium is designed by world renowned architects Zaha Hadid, who created the Aquatis Centre for the London Games in 2012.

The Championship club have been embroiled in a four-year planning battle to get their new stadium plan over the line, but this past January they finally got the go-ahead from the High Court and Luton Borough Council to push forward with the project.

Luton Town will now move away from their 10,000-seater home at Kenilworth Town to the Power Court site in the town centre, which will host 17,500 fans and can be later upgraded to seat 22,500 people.

The stadium will be funded by a new shopping and leisure park just off the M1, which is projected to create 10,000 new jobs in the area and boost the local economy by £250 million annually.

Having established themselves as a solid Premier League side since earning promotion in 2019, Sheffield United can look forward to improving Bramall Lane with an expansion of the South Stand. The revamp will see the stadium capacity increased to 38,000.

Plans to redevelop the ground have been in the pipeline for a long time, with the club originally granted outline consent for expansion in 2009. Adding a second tier to the stand will bring added revenue through 500 extra executive seats, while also adding another 78 wheelchair accessible seats.

Read: How Juninho came to fall in love with unfashionable Middlesbrough