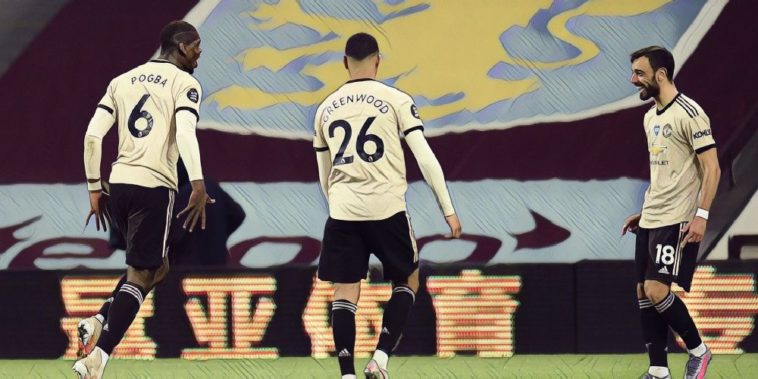 Manchester United continued their pursuit of Champions League football with a comfortable 3-0 win over Aston Villa.

Ole Gunnar Solskjaer’s side came into the game on the back of a 16 game unbeaten run, but started Thursday night’s encounter in sluggish style, although Aston Villa were unable to capitalise on their early dominance.

The first-half drinks break saw Manchester United start to come into the game, and on 27 minutes, referee Jon Moss adjudged Ezri Konsa to have brought down Bruno Fernandes just inside the area, though replays showed the decision was perhaps harsh on the hosts. Nevertheless, January signing Fernandes stepped up and confidently dispatched his spot-kick to net his seventh Premier League goal in just his 10th outing.

Just as Villa were looking to get in at the break with just a one-goal deficit, Manchester United struck on the counter, man of the moment Mason Greenwood linking up with Anthony Martial on the counter, before the 18-year-old academy graduate received the ball back and cracked it past Pepe Reina from 20 yards with his supposedly weaker right foot.

Villa looked dejected in the second half, and the scoring was rounded off as Paul Pogba netted his first goal of the season, curling the ball through a crowded defence and past an unsighted Reina from outside the box.

Manchester United are the first team in Premier League history to win four consecutive games by a margin of 3+ goals.

United never really got out of third gear and could easily have scored more, and speaking after the game, Ole Gunnar Solskjaer admitted his side were ‘a bit fortunate’ to be 2-0 up at the interval, but defended the awarding of the penalty.

“Going into half-time at 2-0 up we were a bit fortunate. After 2-0, we were in control and in the second half we played some excellent stuff. Even at 1-0 I think our defenders would have kept a clean sheet. They took the criticism from last game and performed well.”

Speaking about managing Mason Greenwood and his development – the 18-year-old scoring his fourth in three games – the former striker admitted the young forward is undroppable at the time being.

“I am doing my bit to help him but he has to do it – turn in performances in training, in games, live his life properly, it’s up to him how far he wants to go,” he added.

“He’s 18, of course he will get better. He is a natural footballer, has been in the academy since he was a little boy, his dad showed me a picture of us when he was seven. He knows we believe in him. You cannot leave players out when they score goals.”

The result leaves Manchester United just one point behind fourth placed Leicester and two behind Chelsea in third, while Aston Villa remain deep in the relegation mire, remaining four points adrift of Watford.

Dortmund ‘holding out for £90m’ for Man Utd target Sancho