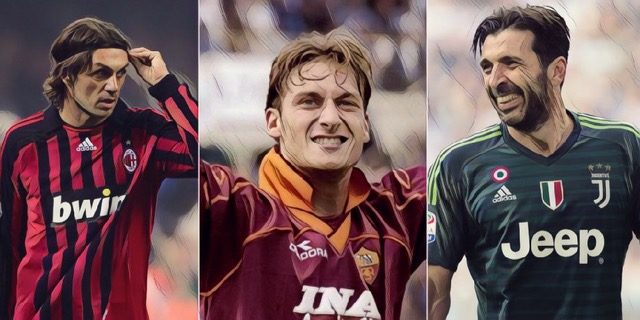 Gianlugi Buffon made further history in a remarkable career this weekend, the goalkeeper setting a new record for the most ever Serie A appearances during Juventus’ win over Torino on Saturday.

Buffon is rightly recognised as one of the greatest players in the history of Italian football and is one of just four players to have reached 600 appearances in Serie A, a stellar quartet of names who sit amongst the most iconic footballers to have played in the division.

Following the breaking of the appearance record, we’ve decided to look back and appreciate the four legends to make over 600 appearances in Italy’s top tier:

A icon of Inter Milan and the foreign player with the most appearances in Serie A history, Javier Zanetti was a model of consistency and professionalism throughout a career of great longevity and success.

Zanetti arrived from Banfield during the mid-nineties and became a key component of several eras at the San Siro, his performances rarely dropping throughout an Inter career that delivered 858 appearances in all competitions.

The Argentinian was a world-class talent in brilliantly unassuming style, equally comfortable at full-back or in defensive midfield and providing endless energy alongside his tactical and technical excellence.

He spent almost two decades with the Nerazzurri and was incredibly a key figure under 17 different managers, winning five league titles, four Coppa Italia trophies, the Champions League and the UEFA Cup amongst his extensive collection of honours.

The crowning glory of his career came under the guidance of Jose Mourinho during the 2009/10 campaign, the 36-year-old Zanetti making more appearances than any other player as Inter became the first side in Italian football history to complete a continental treble – their Champions League triumph ending a 45-year wait to be crowned as European champions.

Central to their success was their evergreen captain, a player who will forever be synonymous with the famous blue and black colours of one of Italy’s great institutions.

The home-town hero whose unwavering loyalty saw him become the greatest player in Roma history, Francesco Totti enjoyed a phenomenal 24-year career in the colours of the Giallorossi.

Totti made his debut as a 16-year-old and quickly flourished as a generational talent, establishing himself as the star turn of the Roma side and amongst the best players in world football.

The forward oozed class and self-confidence and whilst a great goalscorer – only one player in Serie A history has ever scored more than Totti’s 250 league goals – he was perhaps an even better creator.

Whether stationed from the left, as a number ten or a false nine, Totti was magnetic as the centre-piece of Roma’s best play, technically superb and possessing elite vision and a penchant for the spectacular.

Totti’s loyalty to Roma saw him turn down overtures from Europe’s elite to remain with the capital side, winning the Scudetto during the 2000/01 season as the trequartista of an exhilarating attacking line-up including Gabriel Batistuta and Vincenzo Montella.

Twice named as Serie A Footballer of the Year and as the division’s finest Italian player on five occasions, he won the European Golden Shoe in 2006/07 and holds the record for the most appearances and goals in Roma history.

He captained the side for almost two decades after becoming the youngest ever Serie A captain at 22, Totti an irresistible number ten and the emblematic leader of Roma throughout his career.

10 of the best quotes on Roma legend Francesco Totti

From one iconic one-club man to another, Maldini is the Milanese equivalent to the aforementioned Totti but one who differs greatly in style.

Recognised as one of the greatest defenders in the history of the sport, Paulo Maldini is amongst the few players for which the term ‘legend’ feels wholly apparent. The defender came through the academy ranks at AC Milan to follow in the footsteps of his late father, Cesare, before forming part of the best sides in Rossoneri history.

An indispensable member of Arrigo Sacchi’s ‘Immortals’ and Fabio Capello’s ‘Invincibles’, he won five European Cups and seven league titles during a glittering 25-year career at the San Siro, making 902 appearances in all competitions and being capped on 126 occasions for the Italian national side.

He inherited the club captaincy from Franco Baresi and became a legendary leader for Milan, a vocal on-field presence who led with presence, performance and personality.

10 of the best quotes on AC Milan legend Paolo Maldini

The recent record-breaker and amongst the best goalkeepers of all-time, Gianluigi Buffon eclipsed Maldini’s landmark against Torino in a career currently in its 25th season.

Buffon emerged as part of an exciting Parma side and won a Coppa Italia and UEFA Cup double with the club before a world-record move to Juventus, where he has since made 670 appearances for the club in all competitions either side of a single season stint at Paris Saint-Germain.

His list of honours includes a record nine Serie A titles and the World Cup with Italy, whilst no player has ever made more league appearances in the history of Europe’s top five leagues.

Named as the division’s best goalkeeper on 12 occasions, Buffon was crowned as Serie A Footballer of the Year during the 2016/17 campaign – a season which saw Juventus secure a domestic double during a decade of dominance for the Old Lady.

The Champions League sadly remains a glaring omission from an almost unrivalled list of honours, though Buffon remains in pursuit of the prize as he continues to play at the highest level past his 42nd birthday.