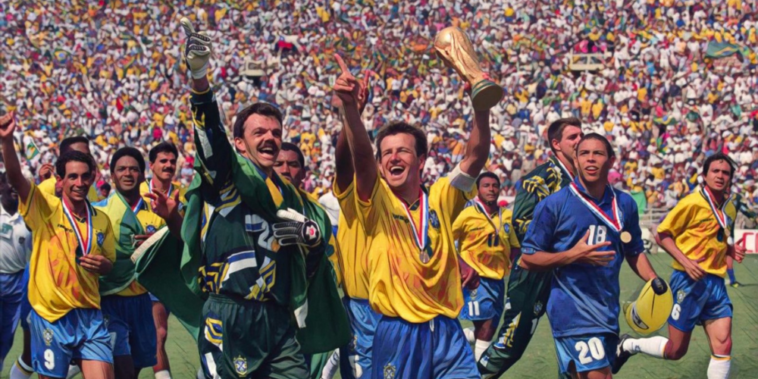 The 1994 World Cup headed to the United States in a tournament that saw Brazil crowned champions for a record-breaking fourth time.

Brazil’s shootout success against Italy saw the Selecao end more than two decades of near misses, with the famous yellow shirts of the South American giants hoisting aloft football’s most famous trophy in Pasadena.

Perhaps more pragmatic than past editions of brilliant Brazil teams, but Carlos Alberto Parreira’s found a way to win.

Here is the Brazil side that won the World Cup at USA ’94.

Taffarel spent a decade as Brazil’s first-choice goalkeeper and featured in eight major tournaments for the national side, including the Selecao’s success in the United States. He recorded five clean sheets and conceded just three goals during Brazil’s campaign, while he made a crucial save from Daniele Massaro as Italy were beaten on penalties in the final.

The most-capped goalkeeper in Brazil’s history with 101 appearances, he had spells in Europe with Parma and Galatasaray, winning two league titles and a UEFA Cup with the latter.

It's 25 years since his heroics inspired 🇧🇷@CBF_Futebol to glory in the USA! 🧤💪

Taffarel – who is currently a goalkeeper coach for both Brazil and Liverpool – also formed part of the team that reached the 1998 final, where defeat to hosts France proved his final international appearance.

One of the best right-backs of his era, Jorginho featured in every game during Brazil’s run to success at USA ’94.

The defender provided two assists during the tournament, including a cross for Romario’s winner in the semi-final win over Sweden. However, his final was cut short through injury after just 20 minutes, with Jorginho substituted and replaced with Cafu.

At club level he spent six seasons in the Bundesliga with Bayer Leverkusen and Bayern Munich, where he won the German top flight with the latter in 1993/94.

His replacement, Cafu, made the first of three consecutive World Cup final appearances in 1994, having gone on to represent Brazil in both the 1998 and 2002 deciders. No player has ever matched that achievement, with Cafu captaining the Selecao to success in the latter final.

Aldair became a club legend at Roma after spending more than a decade with the Italian side, a period which saw the centre-back make more appearances than any other foreign player.

He had not been included in the initial squad for USA ’94, but was selected after Carlos Mozer withdrew through illness and started the final win over Italy in California. Aldair won 80 caps for the national side and featured in three World Cups, while he was inducted into the AS Roma Hall of Fame for his contribution to the Serie A side.

He won the Scudetto with Roma in 2000/01 and saw his number six shirt briefly retired upon his exit from the game.

Marcio Santos was named in the Team of the Tournament for his performances at the World Cup, where he formed part of a water-tight rearguard that conceded just three goals.

Santos scored during the group stage win over Cameroon as Brazil eased into the knockout rounds, but missed his spot-kick in the shootout success against Italy in the final. Fortunately for the defender, Brazil went on to win after Roberto Baggio famously blazed his effort over the crossbar.

Santos later formed part of the team that won the Copa America in 1997, but missed out on a place in the squad for France ’98. He made the last of his 43 appearances for Brazil the previous year.

Branco was among the more experienced options in Parreira’s squad and came into the side during the knockout stages, after Leonardo was banned for a deliberate elbow on Tab Ramos against the USA.

The left-back scored a brilliant free-kick from distance as Brazil beat the Netherlands 3-2 in the quarter-finals and converted his spot-kick in the final shootout. He made 72 appearances for Brazil, scoring nine goals, and had a short spell in the Premier League with Middlesbrough in 1996.

Mazinho started on the right of Brazil’s midfield for the final, in what proved to be his last appearance for the Selecao.

He was one-third of one of the World Cup’s most memorable celebrations, as he joined Bebeto and Romario in their famous cradle-rocking celebration against the Netherlands. Mazinho is the father of two famous footballers, Thiago and Rafinha Alcantara.

The latter followed in his father’s footsteps and has earned two caps for Brazil, though Thiago chose to represent Spain at international level. The Liverpool midfielder has won 46 caps for La Roja.

Mauro Silva won 59 caps over a decade with the Brazilian national side and featured in every game of their victorious 1994 campaign.

The midfielder was beginning to make his name at Deportivo La Coruna, where he became an iconic figure. Just two players have ever made more than his 369 appearances for the Spanish side, with Silva a key figure in the team who enjoyed a golden era in the late nineties, winning a first Copa del Rey in 1994/95 and first La Liga title in 1999/2000.

Dunga’s selection ahead of the tournament received some criticism, with the combative midfielder viewed somewhat as the antithesis to the fluid football Brazil had become famous for.

He ended USA ’94 as a World Cup-winning captain however, after helping Brazil grind through the tournament to win a fourth world crown. It was the highlight of a 91-cap career for Dunga, who is one of just two men – alongside Spain’s Xavi – to have featured in a World Cup final, an Olympic final, a Confederations Cup final and a continental championship final.

He was one of four Brazilians included in the World Cup’s All-Star Team and Dunga has since had two spells as manager of Brazil, leading the team to the 2010 World Cup.

Zinho was among a handful of Brazil’s victorious squad who never experienced European football, with the winger’s club career including spells at Flamengo, Palmeiras and Grêmio.

He won 57 caps for the Selecao and scored seven goals, starting the final win over Italy. He was substituted in extra-time of the contest, with Viola on as his replacement.

Zinho won the last of his caps in February 1998 and missed out on place in that summer’s World Cup squad.

Bebeto formed one half of a brilliant forward pairing with Romario, one that scored a combined eight goals to lead Brazil to success.

He scored the decisive goal in the last-16 win over host nation USA, before netting against the Netherlands in the quarter-finals and introducing the watching world to his cradle celebration.

Bebeto – who had top scored as Brazil won the Copa America in 1989 – scored 39 goals in 75 appearances at international level, with only five players having ever netted more for the Selecao.

25 years ago, an iconic celebration was born. 👶🇧🇷

Brazil legend Bebeto explains the moment and the impact it has had on his life, as well as many others! pic.twitter.com/y9kLtbitzj

At club level he had a prolific period with Deportivo La Coruna, in which he scored 100 goals in 150 appearances and won the Pichichi Trophy in 1992/93.

Iconic Duos: Bebeto and Romario, the polar opposites who brought stunning synergy to the Selecao

The inspiration behind Brazil’s triumph, Romario remains the most recent winner of both the World Cup and Golden Ball in the same tournament.

Romario arrived in the United States after a sensational first season at Barcelona, in which he had scored 30 goals in just 33 league appearances for the Spanish champions.

Electric at the World Cup, he scored five goals at the finals including one in each of Brazil’s group games. He then scored in the thrilling quarter-final win over the Netherlands, before heading home the semi-final winner against Sweden.

Romario – who became famous for his trademark toe-poked finish – scored a staggering 690 goals across his club career. For Brazil, his return of 56 goals in 70 appearances ranks him fourth among the nation’s all-time top scorers, behind only Pele, Neymar and Ronaldo.