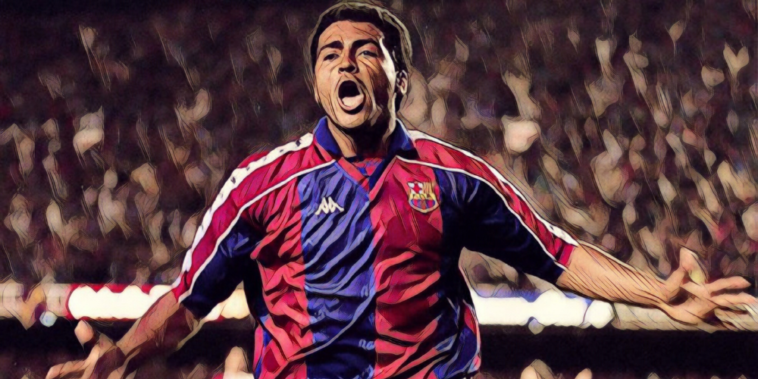 Faced point-blank with the barrel of a gun and asked to provide one footballer to convert a goalscoring chance, you would be hard pressed to find a better answer than Romario.

As unrealistic and amplified as that analogy may be, it paints a picture of a goalscoring great whose ruthlessness saw him hailed as a genius by some of football’s most revered names.

Romario is – and will always be – one of Brazil’s most loved footballing figures, a predator in the penalty-box with an unwavering ability to turn chances into match-winning moments.

His story shares similarities with other superstars who have risen from South America’s most challenging economic environments, with Romario born in Jacarezinho, the second-largest favela in Rio de Janeiro.

Escapism from those humble beginnings, both in mind and matter, was found in football.

A ball was never far from Romario as he honed his skills in the city’s concrete confines, before he joined the youth ranks of Vasco da Gama as a teenager, having impressed at local side Olaria.

Romario’s career would later involve colourful chapters as a footballer who refused to adhere to convention, his extroverted personality leading to both controversies and chaos.

Amongst his earliest misdemeanours came after he as caught urinating off a hotel balcony at the 1985 World Youth Championship in Moscow, the same season he was handed his senior debut for Vasco.

Sent home from the tournament, it was the first example of how the magic and mischief of Romario often went hand in hand.

Whilst questions may have been asked about his behaviour, there was no disputing his frightening talent as the goals began to flow in Brazilian’s top division.

Romario scored 80 goals across just four seasons at Vasco, before his seven goals fired Brazil to the final of the 1988 Olympic tournament in South Korea and paved the way for his European emigration.

PSV Eindhoven secured the signing of the forward, having just been crowned as European Cup winners following a historic treble season under Guus Hiddink.

The Eredivisie side boasted five members of the Netherlands squad that had won Euro ’88 during the summer, before adding a samba superstar to their ranks.

Romario netted 26 goals in all competitions during his maiden season in Europe as a domestic double was secured, winning a further two Dutch titles during a prolific period in Eindhoven.

You would be forgiven for thinking Romario’s exploits came as a result of dedicated professionalism, but his gift for goalscoring was matched only by his penchant for partying.

Late nights, women, clubs and bars came almost as frequently as the goals he scored, with Romario possessing a unique ability to laugh in the face of the measures taken to be an athlete of the highest level.

His mindset was unwavering. As long as the goals flowed, why change his ways? This was a man who had become a success story, the finest finisher in the favelas having evolved into predacious perfection.

He scored an astonishing 128 goals in just 142 appearances across his five seasons with PSV, finishing as the division’s leading scorer on three occasions.

It came as little surprise when Barcelona came calling, with Romario viewed as the final piece of the puzzle for Johan Cruyff’s Dream Team.

The Catalan side had won three consecutive league titles and a maiden European Cup a year earlier, before adding Romario to their ranks.

What followed was a short but spectacular spell in Spain as Romario dismantled the division’s best defences, plundering 30 goals in just 33 league appearances to win the Pichichi Trophy as the league’s leading scorer.

His goals included an El Clasico hat-trick as eternal rivals Real Madrid were thrashed 5-0, dovetailing devastatingly with Hristo Stoichkov, the duo bringing a unique brand of rock and roll football to Catalonia.

Such was their level of utter brilliance, the club’s humbling against AC Milan in the 1994 Champions League final was viewed as a seismic shock to their hopes of genuine greatness.

That summer proved to be the zenith of Romario’s time as the world’s finest finisher however, as he led Brazil to success at the 1994 World Cup in the United States.

He was named as the tournament’s best player after scoring five goals, including the decisive winner in the semi-final showdown with Sweden at Pasadena’s Rose Bowl, later the scene as Brazil hoisted aloft their fourth World Cup.

The World Cup is the pinnacle of the sport, but for Brazil it has even greater significance than most, the images of Romario clutching football’s biggest prize ensuring his eternal place amongst his nation’s pantheon of greats.

He was named as winner of the FIFA World Player of the Year award, a fitting and visual representation of his place at the sport’s summit.

Romario’s brilliance at Barcelona proved short-lived however, his lavish lifestyle leading to an increasingly fractious relationship with Cruyff.

Recalling the mindset of Romario at the peak of his powers, Cruyff spoke on how the forward’s passion for partying knew few bounds, after requesting time off training to attend Rio Carnival.

“Laughing, I replied: ‘If you score two goals tomorrow.’ The next day Romário scored his second goal 20 minutes into the game and immediately gestured to me asking to leave. He told me, ‘Coach, my plane leaves in an hour!’ I had no choice but to let him go”.

Whilst Romario’s extravagance was indulged to an extent, it soon led to the breakdown of his Barcelona career and he returned to Brazil with Flamengo in 1995, ending his career in Europe aside from a brief 12-game return with Valencia.

His time at Flamengo – coming either side of that short stint at the Mestalla – proved northing short of extraordinary, scoring 184 goals in just 209 appearances.

Romario was freakish when within sight of goal, lighting up when greeted with the whites of a goalkeeper’s eyes and perfecting the simplistic effectiveness of the toe-poke.

His diminutive stature – earning him the nickname Baixinho (Shorty) – proved a help rather than a hinderance, his low-centre of gravity and stout lower body allowing him to accelerate away from opposition who dared get too tight.

The late nineties coincided with success at international level alongside his fruitful Flamengo spell, where Romario formed an iconic partnership alongside Brazil’s next great hope, Ronaldo Nazario.

Romario had encouraged his protégé to move to PSV as Ronaldo took his own first steps into Europe and together the two worked in destructive tandem as Brazil won the 1997 Copa America.

The tournament saw Ronaldo named as best player with five goals, whilst Romario contributed three of his own as O Fenômeno and his mentor proved unstoppable.

The calendar year of ’97 saw the two line-up together on 16 occasions for the national side, a run of fixtures which saw the Romario-Ronaldo partnership score 31 of Brazil’s 52 goals, including 12 direct assists between the pair.

Fitness issues prevented Romario from featuring at the following year’s World Cup as Brazil were beaten by host nation France in the final, in a case of what might have been given the electricity of their fleeting fluidity in tandem.

Romario made a romantic return to Vasco shortly after the turn of the millennium, averaging almost a goal-per-game across three seasons with the net bursting on 132 occasions in 135 games.

His latter years proved a more nomadic existence with spells at Fluminense and in Qatar, Australia and the United States, alongside two further periods with Vasco as his love-affair with the club was written across four chapters.

The club’s spectators even invaded the pitch following a converted penalty against Sport Recife in May 2007, the goal acknowledged as the 1000th of Romario’s career by those inside the ground.

Official statisticians have discredited that figure given the number includes youth goals and unofficial friendly fixtures, but for those who idolised Romario it was a milestone moment to savour.

The curtain came down not long after that moment, as Brazil said goodbye to a goalscoring genius.

Electric and egotistic, Romario was both brilliant and unapologetically himself, one of the finest finishers of the modern era and a footballer who has left indelible mark on the beautiful game.