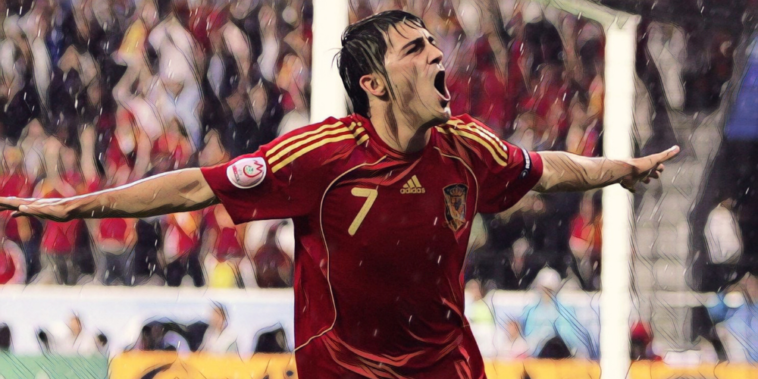 Hat-tricks at major international tournaments are as rare as hens’ teeth, but when they happen their impact is typically profound.

Across the fifteen editions of the European Championship we’ve seen just eight hat-tricks scored, with the last one coming over twelve years ago. Each has its own story.

If a player could choose the outcome of their international debut, it would probably look something like Dieter Müller’s. After scoring 14 goals in 19 Bundesliga outings, the prolific Köln striker received a surprise late call-up to Helmut Schön’s Euro 1976 squad.

In the semi-final West Germany, who were reigning World and European champions, found themselves 2-1 down to hosts Yugoslavia. Minutes from time, in one of history’s great dice-rolls, Schön handed Müller his bow.

His first touch, an emphatic header from a corner, drew the sides level. In the dying embers of extra-time the 22-year-old edged his team in front, before completing a remarkable 27-minute hat-trick with another ruthless finish.

Despite losing in the final against Czechoslovakia on penalties (the night Antonín Panenka scored that cheeky chip) Müller’s explosive performance – one of the most spectacular substitute appearances you’re ever likely to see – remains truly iconic.

Hat-tricks really don’t come much easier than this – especially against top opposition. After defeating Czechoslovakia in their group opener, perennial finalists West Germany faced a formidable Dutch side in Naples.

The 1978 World Cup runners-up were favoured, but Jupp Derwal’s side were also a formidable outfit. Seasoned campaigners like Rainer Bonhof were complimented by the youthful exuberance of Allofs and, player of the tournament, Bernd Schuster.

In the 20th minute, after Schuster hit the post from distance, Fortuna Düsseldorf striker Allofs tapped home into an empty net. His second, a well-placed effort, was followed by yet another tap-in in the second half – all thanks to the industry of emerging superstar Schuster.

West Germany went on to win the competition, with the unlikely Allofs securing the top scorer honour. Schuster, who had a hand in all three goals that day, was the man behind the hat-trick and the true hero in Naples.

Say what you will about Platini the president but, Platini the player was a phenomenon. After bagging two goals at the 1982 World Cup, Le Roi was out to cement his reputation as an elite footballer.

After defeating Denmark in the group opener, thanks to a Platini goal, Les Bleus faced age-old rivals Belgium. This match is fondly remembered as 29-year-old Platini’s seminal moment and one of the great performances of all-time.

France ran riot in Nantes, with Platini slotting home the opener after just four minutes. Goals from Alain Giresse and Luis Fernandez put the tie to bed, before Platini made it four from the penalty spot. He completed his hat-trick a minute from time, deftly heading a Giresse free kick beyond Jean-Marie Pfaff.

Both Giresse and Jean Tigana were immense that afternoon, but it was the stylish Platini that stole the headlines. There was more to come from France’s talisman however – much more.

Three days after his heroics in Nantes Platini was at it again – this time against tougher opposition.

The Yugoslavian side he faced were a wounded animal, still reeling from a 5-0 drubbing at the hands of Denmark. With their exit already confirmed, the winless Balkan side played with a freedom and took the lead just before half-time. Les Bleus, who had already secured progression to the knockout stages, never got out of first gear – much to the displeasure of the partisan crowd.

Michel Hidalgo’s side began the second-half in Saint-Étienne like a house on fire. Before long Platini had put them level with a cool back post finish, then promptly followed it with his second – a precision header.

Michel Platini scored a hat-trick for France, helping guide them to a 3️⃣-2️⃣ win over Yugoslavia in the @UEFA Euro Championships #OnThisDay in 1️⃣9️⃣8️⃣4️⃣…

Which was his best❓🤔 #FRA pic.twitter.com/KeyBTAOcbH

The French captain’s opus came with 13 minutes remaining when he clipped an exquisite free-kick over the Yugoslav wall and into the top corner. Platini, who championed France to the title, bagged a tally of nine goals at the tournament – a record that still stands.

After failing to qualify for Euro 1984, and the World Cup in 1982 and 1986, Dutch football was crying out for a saviour. The burden of consecutive losses in World Cup finals (1974 & 1978) still weighed heavy on the nation and this new generation of players were desperate to exorcise the demons of old.

They found their messiah in 23-year-old AC Milan striker Van Basten – a player reaching his zenith. His finest display of the tournament came against Bobby Robson’s England.

Both nations began the group stage with a loss, resulting in a tense undertone to proceedings in Düsseldorf. Van Basten, the tournaments top scorer, single-handedly dismantled England that day. His first two goals were typically accurate finishes. The third – a clinical volley past Peter Shilton.

🇳🇱 Which goal was best?

Marco van Basten's hat-trick earned the Netherlands a 3-1 victory against England in Dusseldorf #OTD in 1988!

His ruthlessness in front of goal was astounding. The man nicknamed ‘The Swan of Utrecht’ led the Oranje to victory, brought home the holiest of grails and became a footballing god in doing so.

The name Conceição will undoubtedly roll off the tongue of any devout Serie A fan. The ex-Lazio, Parma and Inter winger shone at Euro 2000, producing his greatest performance against Germany in the group stage.

The Seleção, who had never won a major international trophy, were drawn in the group of death alongside England and Germany. After narrowly dispatching Romania and England, they faced an underperforming German side who were on the brink of elimination.

Portugal, who had already secured progression, fielded a largely second string side but nevertheless put the toothless Germans to the sword. Conceição opened the scoring on 35 minutes, nodding in a Rui Jorge cross from close range. He added his second, a low shot that evaded the grasp of Oliver Kahn, before completing his hat-trick late on.

As fine as his display for the Navagadores was, history will remember the night mostly as one of immense German embarrassment.

Patrick Kluivert: A Rout in Rotterdam (2000)

The 1999-2000 season was another largely underwhelming campaign for Blaugrana newboy Kluivert. After scoring 15 La Liga goals for the second consecutive season (a failure by the Barcelona’s lofty standards) the pressure on the Dutch striker was mounting.

He received no such criticism on international duty. In the iconic orange jersey he had been prolific, bagging 23 goals in 42 appearances. With a point to prove, and in front of his home fans, he lit up Euro 2000.

After dominating their group Frank Rijkaard’ side played out a one-sided quarter-final clash against Yugoslavia – one punctuated by a breathtaking 30-minute hat-trick by the tournament’s joint top scorer.

The forward broke the deadlock, before adding a second thanks to a pin-point Edgar Davids delivery and effectively ending the tie with his third. The Oranje, who fell to Italy in the semis, added three more. Their six goal haul is still the most scored in a match by one team.

When Patrick Kluivert scored a hat-trick at Euro 2000! pic.twitter.com/aBvTEw5at7

Spain’s much revered era of international dominance began with their historic triumph at Euro 2008 in Austria and Switzerland. Luis Aragonés, the man charged with ending the nation’s 44-year wait for a trophy, had the cream of club football at his disposal.

Players like Iker Casillas, Xavi and Fernando Torres all plied their trades for European giants and yet, it was a Valencia man who provided the spark. In their group opener, David Villa tore the Russian defence to shreds.

Villa, the tournament’s top scorer, opened the scoring in Innsbruck after a tidy exchange with strike partner Torres. On 44 minutes he doubled La Roja’s lead, latching on to a defence-splitting pass from an imperious Andres Iniesta. He completed his hat-trick in style, turning Roman Shirokov inside out and finishing low into the net.

The 4-1 result was a shot across the bows – just a glimpse of things to come. He had plenty of help, but, Villa was the progenitor of Spain’s success.