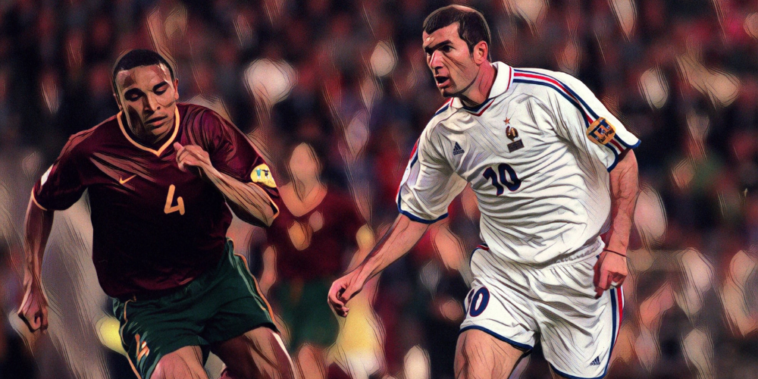 Major international tournaments inevitably create huge excitement but can often fail to truly deliver, though that assessment fails to ring true when discussing the European Championship in 2000.

The turn of the millennium proved a fine time for football on the continent, a combination of strong sides at club level and a collection of generational talents peaking at a similar time making the upcoming Euros one to truly relish.

Euro 2000 was the first ever tournament co-hosted as the Netherlands and Belgium shared the honour, the former amongst the pre-tournament favourites as stadiums were clad in the nation’s trademark orange colours.

Standing in the way of the Dutch fulfilling a dream of winning a home tournament was a formidable France outfit however, Les Bleus having achieved similar success when lifting a maiden World Cup on French soil two years earlier.

France had even improved since that triumphant victory over Brazil at the Stade de France, their World Cup winners had lacked a genuine top-class centre-forward, but the continued emergence of Thierry Henry, Nicolas Anelka and David Trezeguet left manager Roger Lemerre with an embarassment of attacking riches.

The key however, as ever, was the genius of Zinedine Zidane.

Zidane’s two goals in the World Cup final win had cemented his place in French football history forevermore, but whilst that brace may be the defining image of his international career, it is at Euro 2000 where he truly reached his zenith.

This was a major tournament in which playmakers reigned supreme, an era in which free-spirited footballers of sublime talent were freed of shackles and allowed freedom outside of rigid systems.

France fluctuated between a 4-2-3-1 and 4-3-1-2 formation throughout Euro 2000, Zidane floating in a free role as the quintessential number 10 in both systems.

The world champions began with a win over Denmark, surviving an early scare before taking control, a theme of their tournament that summer.

The French often flirted with danger during Euro 2000, though there was an overwhelming feeling that their class would eventually shine through.

After dispatching the Danes and 1996 finalists Czech Republic in their opening two group fixtures, a rotated side – without the presence of their talisman in Zidane – were edged in a 3-2 thriller by co-hosts the Netherlands.

Zidane, throughout it all, was a footballer at the peak of his powers, his unique combination of imposing stature and balletic balance seeing him weave through opposition traffic in that unforgettable graceful manner.

His tournament kicked into overdrive as Spain were beaten in the quarter-finals, with Zidane opening the scoring with a fabulous free-kick that bent up and over the wall and beyond the despairing dive of Santiago Cañizares.

France edged La Roja 2-1, their passage to the last four secured courtesy of the mastery of their midfield magician, Zidane manipulating the ball in a way rarely seen before or since, his first touch immaculate and seemingly not of this world.

Spain’s midfield had spent the entirety of the 90 minutes chasing the formidably-sized shadow of France’s number 10 without ever getting close.

Zidane was not merely a step ahead, he was three or four.

So, onto the semi-finals and the pièce de résistance of Zidane’s Euro 2000 venture, a last four showdown with Portugal’s Golden Generation and a clash billed as Zidane vs Luis Figo.

Figo – his future teammate at Real Madrid – was the symbolic leader of a talented Portuguese outfit and would claim the Ballon d’Or later that year, in addition to making a controversial world-record move from Barcelona to Real Madrid.

Portugal had impressed on their way to the semi-finals in beating Germany and England in the group stage, before a 2-0 win over Turkey in the last eight booked a showdown with the world champions in Brussels.

Zidane began the game in typically mesmeric fashion, a nonchalant backheel freeing marauding full back Bixente Lizarazu down the left flank, whilst his touch and technique was showcased to a capacity crowd as he demanded and distributed the ball.

France fell behind somewhat against the run of play however, Humberto Coelho’s side opening the scoring through Nuno Gomes, the forward bending a finish from distance past Fabien Barthez to hand Portugal the advantage.

The French knew they must raise their game and it was Zidane who took control of the semi-final, one incredible run seeing the midfielder weave through a succession of Portuguese shirts as he drove Les Bleus forward.

Everything appeared so easy and effortless to Zidane, and but for the sweat that poured from his brow you would be forgiven for thinking France’s finest footballer was operating in first gear.

Even that first gear however, was significantly higher than most.

There was little the Portuguese could do to get close to Zidane, the midfielder delving into a box of tricks that contained step-overs, pirouettes and an ability to manipulate the ball by rolling his studs across it.

The Frenchman’s footwork was outstanding, even by the extraordinary standards he had set.

France levelled six minutes into the second half as youngsters Anelka and Henry combined, the former turning sharply before teeing up his partner, who rifled home a low finish into the far corner to restore parity.

France continued to push forward with their Gallic genius at the heart of their best moments, including a wondrous moment of control to carve out an opportunity for the diving Anelka.

Emmanuel Petit’s long diagonal ball in the direction of his teammate left Zidane with much to do, though the midfielder brought the floated pass under control in an awe-inspiring moment of skill.

Petit’s pass arrived in Zidane’s direction only at chest height, with the Frenchman able to cushion the ball upwards. He spun, an entire 180 degrees, before shifting the ball away from the defender in one moment of simultaneous and sensational skill, delivering a tantalising cross that only just evaded Anelka.

For all of Zidane’s brilliance, there proved no breakthrough for the French and extra-time was needed as a decider, but as the prospect of penalties approached Les Bleus were handed their chance.

Abel Xavier’s goal-line handball resulted in a penalty to the world champions, with Zidane forced to wait three minutes to take his kick as the Portuguese protested vigorously at the decision.

Zidane stepped up to dispatch an emphatic penalty into the top corner, the Golden Goal to cap a golden performance and secure France’s place in the final against Italy.

For a short time it had appeared that Figo and Portugal would upstage France and their midfield genius, but Zidane showed once again why he was so often the man to deliver at crucial moments.

Lemerre’s outfit secured a dramatic win over the Italians to be crowned European champions, a stoppage-time equaliser from Sylvain Wiltord forcing extra-time before another Golden Goal winner, as David Trezeguet cemented Les Bleus’ status as one of the great international sides.

Euro 2000 was one of the best major tournaments in recent memory and a competition where the best produced their best, none more so than Zidane who was aptly named as the finest footballer at the finals.

The best player of an entire generation and France’s leading light during an era of unprecedented success, key to Zidane’s lasting legacy was a sensational summer as the new millennia began.

His Portuguese performance proved arguably the best of the lot.