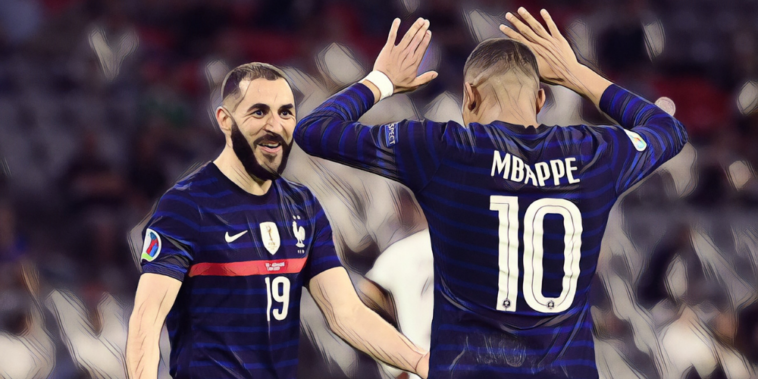 Portugal meet France in a huge showdown in Euro 2020’s Group of Death this week, both sides in need of a result after dropping points in the second round of fixtures.

France are already assured of their place in the knockout stages after taking four points from their opening two fixtures, but any slip-ups against the holders could allow either Portugal or Germany to claim top spot in Group F.

Portugal will be hoping to bounce back after being humbled by Germany last time out, but Fernando Santos’ side have the quality to trouble any team in the tournament.

Ahead of a what shapes as a fascinating clash, we’ve compiled our best combined XI from the two squads.

Hugo Lloris starts in goal for our combined side, with the France captain having been a key part of Les Bleus‘ success in recent years and a stalwart of the side.

Captain for club and country, the 34-year-old has amassed a staggering 127 caps for France and despite occasional criticism at Tottenham remains an integral figure for the world champions.

Last season the Spurs shot-stopper ranked third across the Premier League for save percentage, despite being the seventh-busiest goalkeeper in the division, making 111 saves.

Pavard broke into the France side shortly before their World Cup triumph three years ago and impressed during that success in Russia, with the versatile defender having since remained a fixture in Didier Deschamps’ squad.

The 25-year-old – who is comfortable both centrally and at right-back – plays his club football for Bayern Munich, where he has won consecutive Bundesliga titles since signing from Stuttgart in 2019.

Pavard’s position in the side has come under question following a poor performance against Hungary, but with Nelson Semedo also enduring a torrid time last time out at Euro 2020 it’s the Frenchman who starts for our combined side at right-back.

Another player who disappointed last time out, Dias scored an own goal in the defeat to Germany but remains a crucial component of a Portugal side who will be hoping to make it back-to-back Euro successes.

Dias has had an immeasurable impact at Manchester City this season following his arrival from Benfica, being named as the FWA Footballer of the Year after winning a Premier League and League Cup double.

The 24-year-old is old-fashioned in his uncompromising approach to defending, though possesses the cultured composure in possession needed for modern centre-backs.

Regarded amongst the very best centre-backs in world football, Raphael Varane could quite conceivably make a combined XI compromising every single international side.

Varane is a wonderfully elegant footballer who makes the art of defending often seem effortless, with the France international having won three league titles and four Champions League trophies during a glittering decade spent at Real Madrid.

France’s strength in depth means that left-back options including Real Madrid’s Ferland Mendy were left out of the squad entirely, with Lucas Hernandez and Lucas Digne included in Didier Deschamps’ squad for Euro 2020.

Both players have huge quality with the former part of a formidable Bayern Munich side at club level, but we’ve opted for the attacking threat provided by Portugal’s Raphael Guerreiro in our combined XI.

Guerreiro shot to prominence during Portugal’s Euro 2016 triumph and enjoyed arguably the best campaign of his career at Borussia Dortmund last season, scoring five times and providing 10 assists across just 25 starts in the Bundesliga.

Is there much left to say about N’Golo Kante?

The ever-likeable Chelsea midfielder continues to dominate midfields at the highest level; his endless energy and drive fundamental to both France and the newly-crowned European champions.

Kante often appears a one-man midfield, covering the ground of two players with his timing, positioning and indefatigable stamina making him a unique and elite talent.

Premier League, Champions League and World Cup honours have all come his way in recent years, with Euro 2020 providing the 30-year-old with a chance to complete his incredible silverware collection.

Paul Pogba may attract criticism for his inability to produce consistently at Manchester United, but when placed in a France shirt, the 28-year-old often comes alive.

The presence of the aforementioned Kante almost certainly helps his cause, but Pogba is freed of shackles with Les Bleus and his multi-faceted talents are allowed to flourish on the international stage.

Pogba was excellent in France’s opening 1-0 win over Germany, when afforded the assurance of Kante and Adrien Rabiot behind him the midfielder ventured forward to wreak havoc, playing a superb pass to Lucas Hernandez in the build-up to the goal.

Manchester United fans may scratch their heads when watching Pogba in international action, where there are few midfielders as difficult to contain.

Given the embarrassment of attacking riches available to both sides, we’re opting for attack being the best form of defence with neither of our wide players set to be tasked with tracking back with regularity.

Antoine Griezmann is handed the position on the right of our side, with the Frenchman having been a talismanic figure for Les Bleus in recent years, being named as the best player during their run to the final of Euro 2016, before impressing once again in the nation’s World Cup win two years later.

Griezman has perhaps not looked the same player in the shadow of Lionel Messi at Barcelona, but for France at least he remains indispensable, and has now scored 38 goals in 93 appearances, a figure bettered by just three players in French history.

Cristiano Ronaldo has operated as a sole forward at Euro 2020 so far, but the Juventus superstar starts on the left-hand side for our combined team and remains one of the world’s very best talents.

Ronaldo finished as the leading scorer in Serie A last season to become the first man in history to win Golden Boot accolades in England, Spain and Italy, whilst he has started Euro 2020 in fine fashion to lead the scoring charts alongside Belgium’s Romelu Lukaku, Czech Republic’s Patrik Schick and Netherlands’ Georginio Wijnaldum.

🤤 The flick, the no-look backheel pass…

The 36-year-old’s three goals so far mean he has now reached a staggering 107 in a Portugal shirt, just two short of equalling Iran’s Ali Daei as the highest-scoring player in international football history.

Few would be surprised to see that record fall before the end of this summer’s tournament, with Ronaldo remaining one of the game’s greats and the player who will shoulder Portugal’s bid for a second successive title.

Kylian Mbappe has been hailed as a future best player in the world ever since his explosive emergence at Monaco, with the France forward having enjoyed a meteoric rise to the summit of the game.

Mbappe became the first teenager since Pele to score in a World Cup final during France’s success in Russia, whilst he has gone from strength to strength since that triumph at PSG, scoring an incredible 78 league goals in just 80 appearances across the past three seasons.

The leading scorer in Ligue 1 for three consecutive campaigns, the 22-year-old is already arguably France’s most influential player and one of the very best talents in world football.

Mbappe’s scintillating pace provides an almost unstoppable weapon for Les Bleus with his impact since shooting to prominence resemblant of a young Ronaldo Nazario.

Karim Benzema was a shock inclusion in the France squad for this summer’s tournament, the Real Madrid icon having not featured for the national side for more than five years amid his alleged involvement in a blackmail scandal involving former teammate, Mathieu Valbuena.

Even given France’s extraordinary abundance of talent, it has been difficult to ignore a player who has been one of Europe’s best centre-forwards over the past decade and has arguably taken his game to new heights in recent seasons.

Established as Real Madrid’s leading light following the departure of Cristiano Ronaldo, Benzema has scored 87 goals across the past three seasons and the 33-year-old provides France with another formidable goalscoring option in attack.

Read Also – Five of the best players from Euro 2012