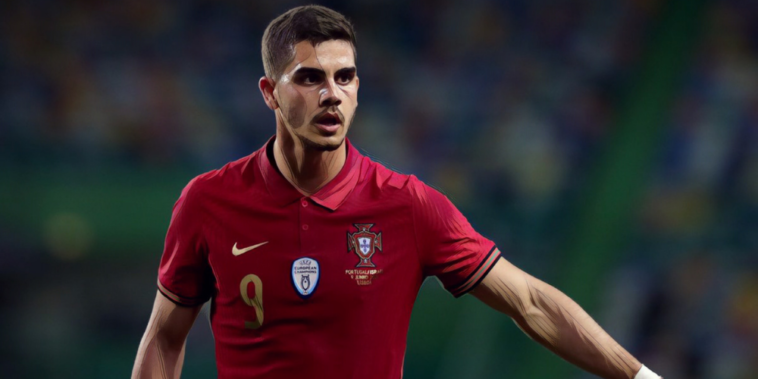 Portugal started their Euros campaign in a positive, albeit not entirely convincing, manner with a 3-0 win over Hungary.

Cristiano Ronaldo and substitutes Rafa Silva and Renato Sanches rightly received plaudits for their performances, but one player who could become vital for the defending champions in future games is 25-year-old striker Andre Silva.

Silva scored a remarkable 28 goals in 32 Bundesliga appearances for Eintracht Frankfurt this season, second only to Robert Lewandowski’s record-breaking total of 41. His non-penalty xG per 90 of 0.63 places him in the 97th percentile of strikers in Europe’s top five leagues, and while he has never had this prolific of a season before, his xG figures have consistently been well-above average for strikers. It suggests that Silva’s goal-scoring should continue to be impressive.

Adi Hutter’s side set up as either a 3-4-1-2 or a 3-4-2-1. They build patiently from the back, rotating the ball amongst the centre-backs, before directly moving the ball to the forward line through direct passes from the back. From there, the ball is moved wide to the wing-backs, who look to find Eintracht’s forwards in the box with deep crosses or move into the penalty area and deliver cutbacks.

In bigger games, Frankfurt are less patient and more vertical as they attempt to maintain a solid pressing and defensive shape and exploit counter-attacks.

Silva has thrived under this tactical approach because he is quite a complete striker. When Frankfurt’s wing-backs cross from deeper areas, he has the movement and physicality to pose as a significant aerial threat. At 6 feet tall he isn’t an especially tall striker when compared to other target men, but his movement and athleticism more than compensate for it.

Silva is intelligent about how he times in runs in the box, lingering in seemingly unthreatening areas before suddenly darting to the near or far post. These delayed runs allow him to get the jump on defenders and make it easier for him to convert headed chances.

His movement is also very controlled, as he makes subtle adjustments with his footwork to ensure he is in the prime position to attack a cross. A good example of this was his goal against Bayer Leverkusen.

When the Frankfurt player receives the ball on the left, Silva (number 33) is not in an optimal position to attack a cross, especially since a cutback is not possible given the other Frankfurt player’s position.

As the player in possession is creating space to deliver the ball, Silva starts to make a run in between the two Leverkusen centre-backs to make it harder for them to mark him. 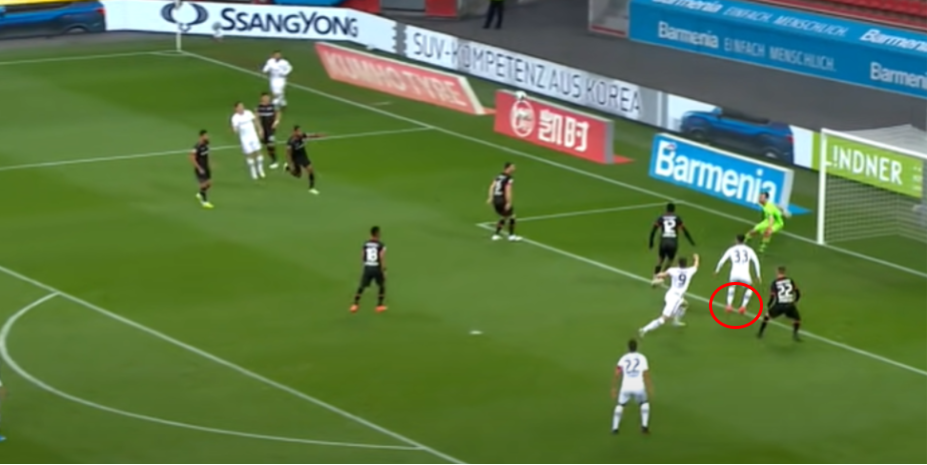 While the ball is in the air, Silva side shuffles a few times to adjust his body position in relation to the ball, allowing him to be in a better place for the header. The traits that Silva exhibited in this goal aren’t particularly eye-catching, but they nevertheless make him an effective goal-scorer in the box.

Silva’s also capable of finishing chances along the ground from cutbacks, through balls, or spilled saves. He has good predatory instincts in the penalty area and is quick to dispatch any loose balls. But what’s more impressive about his finishing is his composure and versatility.

Some strikers excel at converting certain types of chances which can be finished instinctually, with a header or a first-time finish. But when they’re forced to take more time with their finishing, such as with a through-ball or a one-on-one, they lack the composure to replicate the same level of chance conversion.

Silva doesn’t fall into this category. He doesn’t get flustered during one-on-one situations or when there’s more time for him to think about his finish. He’s good at reading situations and deciding what type of finish he should use, whether that’s to the near or far post, lower or higher in the net, a driven shot or a lofted chip. Technically, Silva’s capable of performing all these types of finishes. His ability to then choose when and how to use them is what sets him apart as a goal-scorer.

Beyond his goal-scoring, Silva is capable of dropping deep to assist in the build-up. He’s often the target for penetrative passes along the ground from Eintracht’s centre-backs and deep-sitting midfielders and is comfortable combining with his fellow attackers with quick one-twos. It’s a simple role, but one he performs effectively.

For Portugal, Silva may find it difficult to start games given Fernando Santos’ switch from a 4-4-2 to a 4-3-3 with Cristiano Ronaldo as a lone striker. If he wishes to use Ronaldo as a wide forward at some point during the tournament, perhaps for his added aerial threat from wide areas, then Silva could come into the fold. Generally, though, he’ll likely be used as a substitute.

Still, he could be an important player for them. In their first game, the defending champions struggled to progress the ball through midfield given the defensively-minded double pivot of William Carvalho and Danilo Pereira. With Silva and Ronaldo on the pitch together, Portugal could look to bypass the midfield altogether and go long to them to get the ball up the pitch.

That, combined with his goal-scoring prowess, could make Silva a decisive factor for Portugal in bigger games. The Euros could be his opportunity to announce himself on the global stage as one of Europe’s foremost strikers.

Read Also – Five of the best players from Euro 2008