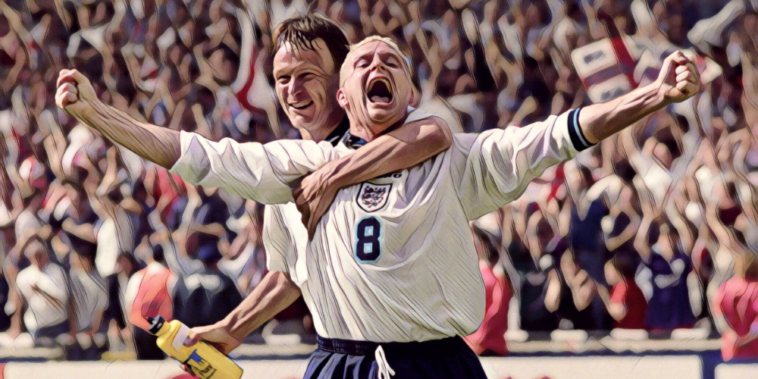 Patrick Shick wrote himself into European Championship folklore following a glorious goal in the Czech Republic’s 2-0 win over Scotland this week, the forward netting from almost 50 yards with no player in the competition’s history having ever scored from a further distance.

Shick’s superb effort already looks a strong favourite for the Goal of the Tournament at Euro 2020, whilst further history was made on Tuesday as Cristiano Ronaldo became the competition’s all-time record scorer – netting a brace in Portugal’s 3-0 win over Hungary.

Following an enthralling start to this summer’s tournament, we’ve decided to look back on some memorable moments from past editions.

Here are five of the most iconic goals in Euros history.

Antonin Panenka is a name now forever etched into football history, following his audacious penalty during the 1976 final between Czechoslovakia and holders West Germany.

The attacking midfielder assumed responsibility for the decisive spot-kick after the final went to a shoot-out, the two teams unable to be separated after a 2-2 draw following extra-time.

Handed the opportunity to win the trophy for Czechoslovakia, Panenka showed incredible composure and audacity to lift his penalty down the centre of the goal, with German goalkeeper Sepp Maier powerless as he anticipated the ball going to his left.

It was a moment that immortalised Panenka with a chipped effort from the spot now named after the midfielder, who was named in the Team of the Tournament, before winning Czechoslovakia’s Footballer of the Year award after helping his nation to a third-placed finish four years later.

The Panenka was born! 🎯

Plenty have copied him since. Your favourite? 🤔#EURO | @ceskarepre_cz pic.twitter.com/MxYoL6lKUO

He scored 17 goals in 59 appearances at international level, but it is that one kick of a football that has cemented Panenka’s legendary status forevermore.

Perhaps the defining goal in European Championship history, Marco van Basten sealed the trophy for the Netherlands in 1988 with one of the most improbable and glorious goals ever witnessed.

A talented Dutch side had beaten both England and West Germany on their way to the final, where they faced a Soviet Union team who had edged the previous meeting in the group stage opener.

Ruud Gullit’s header had handed the Oranje the lead, before Van Basten’s moment of magic secured the Netherlands first major trophy success nine minutes into the second half.

There appeared little danger when Arnold Muhren’s diagonal pass was floated across the pitch towards Van Basten, the angle ever narrowing as the ball dropped from the sky in the forward’s direction.

What followed was an execution of technique that has yet to have been truly replicated at the highest level, a first-time volley from close to the byline that flew beyond the goalkeeper’s clutches.

🇳🇱 #OTD at EURO '88, Marco van Basten scored a famous volley in the final as the Netherlands became champions! 🏆

Van Basten himself admitted in an interview to UEFA that his effort needed some good fortune, but this was a fantastic footballer who knew he had the capabilities to produce something genuinely special.

“You know, you need a lot of luck with a shot like that. Everything went well. It is one of those things that sometimes just happens. You try to do it, but you need so much luck and at that moment it was given to me, to do it at the right time.

“I can tell a lot of stories, but it was just a fantastic feeling. I have to be happy and thankful that such a moment was given to me and to Holland.

Van Basten was fittingly named as European Footballer of the Year following his performances at the tournament, one of three career Ballon d’Or successes for one of the greatest Dutch footballers of all time.

England rode into Euro ’96 amid a wave of optimism with a feverish home crowd in support of the host nation, the Three Lions reaching the semi-finals before crashing out on penalties to eventual winners Germany.

On their way, Terry Venables’ side produced a number of unforgettable moments, however, including a 4-1 thrashing of a heavily-fancied Netherlands side and this genius goal from Paul Gascoigne.

Gascoigne was rightly lauded as one of the most naturally talented players English football has ever produced and this effort against Scotland showcased the improvised brilliance he could provide.

Gascoigne lifts the ball over a bewildered Colin Hendry with his left foot, before volleying home a crisp finish on his right, with the following ‘Dentist Chair’ celebration adding another iconic Euros moment.

🏴󠁧󠁢󠁥󠁮󠁧󠁿 Paul Gascoigne made his England debut #OTD in 1988 before scoring 𝙏𝙃𝙄𝙎 goal at EURO 1996!

It was ultimately not to be for England as football briefly threatened to ‘come home’, but Gazza’s glorious goal in the Wembley sunshine remains one of the Three Lions’ best ever in a major tournament.

Another audacious effort from the 1996 European Championship, as a talented Czech Republic side upset the odds to reach the final, with this Karel Poborsky strike eliminating Portugal’s ‘Golden Generation’ in the quarter-finals.

Poborsky had been his nation’s leading light throughout the tournament to date with his creativity and direct approach, and the winger demonstrated his penchant for the spectacular with this unforgettable winner at Villa Park.

Drifting inside from his usual position on the right, Poborsky picks the ball up in the inside-left channel, before setting off on a one-man crusade towards the Portuguese penalty area.

He moves past Paulo Sousa and Oceano before getting a stroke of fortune to bundle his way beyond Fernando Couto, arriving at the edge of the area with plenty of work left to do.

Poborsky opts for a gravity-defying chipped finish, scooping the ball high and up over Victor Baia, whose advanced positioning led to an almighty – and unsuccessful – scramble back towards his goal line.

The ball dropped perfectly into the goal, sending the Czechs into the semi-finals and Portugal crashing out.

Far from a picture book goal, but one that created a gargantuan shock as Greece’s underdogs stunned Portugal to be crowned as champions of Europe.

Greece were 150/1 rank outsiders for the trophy and had never won a match at a major tournament, having reached just two previous finals in either the European Championship or World Cup.

The Greeks had upset host nation Portugal in their opener before progressing to the knockout rounds, where even victories over holders France and a free-scoring Czech Republic side failed to diminish the magnitude of their final win.

It was a rematch with Portugal, backed by a partisan home crowd and containing talents including Luis Figo, Rui Costa and Cristiano Ronaldo, a fixture which saw Angelos Charisteas cement his legend and power home the only goal of the game.

Denmark’s 1992 success was incredible, but Greece’s coronation ranks as the greatest upset in Euros history, a side whose victory was built on a determined defensive set-up and set-piece prowess.

Their winner came in such circumstance and as an almost a carbon copy of his winner against France in the last eight, Charisteas meeting a Greek corner to rewrite the nation’s footballing history.