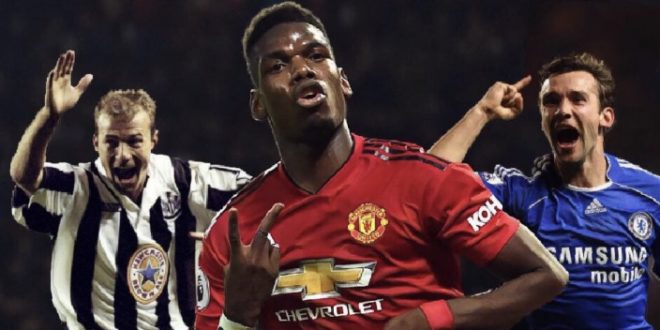 Modern football has seen transfer fees skyrocket on a seemingly never-ending upward trajectory, with the Premier League in particular having seen a steep rise in big-money sums.

Since the formation of the Premier League in 1992, the league’s transfer-record has been broken multiple times, though big fees have not always guaranteed big success.

Backed by Jack Walker’s millions, newly-promoted Blackburn smashed the English transfer-record to sign Southampton forward Alan Shearer who was beginning to establish himself on the South Coast.

A cruciate knee ligament injury curtailed his first season at the club but 16 goals in 21 league appearances was a sign of things to come, as Shearer embarked on the most prolific spell of his memorable career.

The Geordie goal-getter netted over 30 goals in three consecutive Premier League seasons, the only man in the league’s history to have achieved the feat, helping fire Blackburn to the Premier League title in 1995.

After four seasons he departed for boyhood club Newcastle, having established himself as one of the world’s finest forwards.

Having impressed under Brian Clough at Nottingham Forest since arriving as a young midfielder from Ireland.

Named in the PFA Team of the Year but unable to help the club avoid relegation, Keane memorably verbally agreed to join Blackburn before a call from Sir Alex Ferguson saw him head to Old Trafford.

In Manchester, Keane would become one of the Premier League’s most ferocious competitors and arguably the most inspirational captain in the league’s history.

In a glittering career under Ferguson, Keane helped United to seven Premier League titles, four FA Cups and the 1999 Champions League as part of the club’s famed treble-winning season.

His controversial departure in 2005 severed his ties with the club, though Keane remains one of the most iconic and important players in the club’s illustrious history.

Cole had helped fire Newcastle into the Premier League after joining from Bristol City in 1993, before following that up by scoring a EPL record 34 goals on their return to the top flight to fire the Magpies into Europe.

Much to the dismay of the Newcastle fans, Cole moved to Old Trafford in a shock move with winger Kieth Gillespie going the other way in part-exchange.

Cole would go on to strike up a fine partnership with Dwight Yorke and score over 100 goals at United, winning five league titles and the 1999 Champions League.

The talented Dutchman had lost his way somewhat at Inter Milan, having emerged as one of the brightest talents to come out of the famed Ajax academy in recent seasons.

Arsenal spent a British-record £7.5m to bring the forward to Highbury, becoming manager Bruce Rioch’s first signing. Ricoh’s tenure is not remembered too fondly by the club’s supporters, though they remain thankful for the signing of Bergkamp.

Bergkamp proved inspirational during a hugely successful period under Arsene Wenger, being awarded the PFA Player of the Year and FWA Footballer of the Year awards as Arsenal completed a memorable double season in 1998.

Sublimely talented, Bergkamp’s collection of wonder goals endeared him to the club’s fans, twice winning the league’s Goal of the Season award and cementing himself as one of Arsenal’s greatest ever players.

After three league titles and four FA Cups, he retired in 2006. A bronze statue now resides outside the club’s Emirates home in homage to a North London legend.

The third time in a calendar year that the record was broken, Stan Collymore moved to Anfield in a £8.5m deal in June 1995.

Collymore had enjoyed a prolific two-year spell at Forest, and Liverpool had hoped the forward could fire them back to the summit after a decline since the formation of the Premier League.

A goal on his debut was a strong start, and Collymore formed a strong partnership with Robbie Fowler during his first season at the club scoring 55 goals between them.

His second season was not as successful, with a series of off-field issues costing Collymore his place in the team. The emergence of Michael Owen saw Roy Evans sanction a sale to Aston Villa after two years at Anfield, the forward having scored 28 goals in 64 league appearances.

A second appearance on this list for the Premier League’s all-time leading goalscorer, who joined boyhood club Newcastle in a then world-record £15m deal in 1996.

Shearer had rejected the chance to move to serial league winners Manchester United in favour of joining his hometown side, where he would go on to smash the club’s goalscoring record.

On a personal level Shearer’s Newcastle career was a huge success, his legacy at his boyhood club assured and immortalised with a statue outside of St James’ Park.

However, a pair of FA Cup final defeats were as close as the prolific forward got to ending the club’s long wait for silverware.

It was free-spending Leeds who secured his signature in 2000, signing Ferdinand for a fee of £18m and breaking the British transfer-record.

The deal also made Ferdinand the most expensive defender in football history, and he joined an exciting Leeds side containing the likes of Harry Kewell, Robbie Keane, and Mark Viduka.

He helped the Yorkshire side to the Champions League semi-finals and was later named club captain, though the club’s failure to secure qualification for the following season’s tournament saw Leeds financially implode, with Ferdinand sold to rivals Manchester United following the World Cup in 2002.

Having seen a move to United collapse the previous year due to a serious knee injury, Van Nistelrooy arrived at Old Trafford in a British-record £19m deal in 2001.

The Dutchman certainly proved worth the wait, being named as the PFA Player of the Year in his debut season after scoring 36 goals in all competitions for Sir Alex Ferguson’s side.

Van Nistelrooy would continue to score at a prolific rate, winning the Golden Boot the following season, amassing a record of 150 goals in 219 appearances for the club.

One Premier League title, an FA Cup and a League Cup is perhaps a relatively sparse total for five seasons at England’s biggest club, though few at Old Trafford can forget the ruthlessness of Ruud in front of goal.

A hugely-hyped deal at the time, Manchester United secured the signing of Argentine playmaker Juan Sebastien Veron from Italian side Lazio, having seen the midfielder prove the inspiration behind their Serie A title triumph in 2000.

Veron began brightly, being crowned as the September Player of the Month, but his performances soon dipped as he struggled to adapt to the pace and robustness of English football.

His better performances came in the slower tempo of Europe, though for all his talent he was unable to produce regularly in the Premier League and was regarded by many as a huge disappointment.

After two seasons, he was sold to rivals Chelsea, where he made just 15 appearances before returning to Italy.

The second player to appear twice on our list, Manchester United capitalised on the financial crisis at Leeds to sign their captain Rio Ferdinand in 2002.

The deal again made Ferdinand the most expensive defender in history, eclipsing Lilian Thuram’s move to Juventus a year earlier.

Ferdinand had shone in that summer’s World Cup for England, and soon became a mainstay at the heart of the United defence. Athletic, strong and comfortable in possession, the defender developed into one of the world’s best and enjoyed a trophy-laden spell at Old Trafford.

In 12 seasons, Ferdinand won six league titles, two League Cups and the Champions League, being named in the PFA Team of the Year on five occasions.

Roman Abramovich’s millions had propelled Chelsea to back-to-back Premier League titles, and the capture of AC Milan forward Andry Shevchenko seemed to signal an era of dominance at Stamford Bridge.

Shevchenko was widely regarded as one of Europe’s best players, having won the 2004 Ballon d’Or after firing Milan to Champions League glory the season before.

Handed the number 7 shirt, he began well with a goal on debut in the Community Shield but soon began to struggle with the demands of English football.

The Ukrainian scored just four Premier League goals in his first season, a tally he bettered by just one strike the following year. After two seasons he was shipped back on-loan to Milan.

He finished his Chelsea career having scored 23 goals in 77 appearances in all competitions, a lowly total for a player of such calibre.

The deal which shocked English football to its core, Sheikh Mansour announced his billionaire takeover of Manchester City by smashing the British-record on deadline day to capture Brazil star Robinho.

City had been propelled from mediocrity to the elite of football’s wealthiest clubs, and the signing of Robinho from Real Madrid was their statement signing.

After City fans had forgiven him for thinking he’d joined Chelsea in his unveiling, the forward began well and enjoyed an impressive debut season, scoring on his first appearance and finishing with 14 league goals.

From there, however, his form nosedived. Injuries and loss of form saw him fall out-of-favour in his second season, and in January 2010 he rejoined former club Santos on loan before moving to AC Milan on a permanent deal that summer.

A firm favourite with the Anfield faithful after a prolific period on Merseyside, Fernando Torres sparked anger after announcing his intention to leave the club in January 2011.

Chelsea were interested and had proposed a British-record deal, eventually securing the signing of the Spaniard for a fee of £50m. Torres had scored 65 goals in 102 league appearances for Liverpool, with Chelsea believing they had signed a proven Premier League performer.

Despite looking a shadow of the player who had been so prolific at Anfield, Torres helped Chelsea to an FA Cup and Champions League double in 2012, before adding a Europa League title the following year.

The move to Chelsea had delivered the silverware his career had been missing, though he never looked quite the same player.

The post-Sir Alex Ferguson era had seen the disastrous appointment of David Moyes, and the club decided to spend big in the summer of 2014 in an attempt to restore the side to the elite.

The talented winger began brightly, an audacious goal against Leicester City highlighting his undoubted quality, but his failure to adapt to life in England soon became apparent.

A burglary at his home sparked rumours of discontent, whilst his on-pitch form deteriorated at a rapid rate. By the end of the season Di Maria was desperate to leave, and was sold to French side Paris Saint-German after just a single season at Old Trafford.

He was voted as the worst signing of the Premier League season.

Four seasons in Turin had seen Pogba flourish into one of the most promising talents in Europe, having helped the Italian side to four consecutive Serie A titles.

Pogba’s return was a statement signing from United, who were desperate to return the side to former glories under new manager Jose Mourinho.

Pogba’s first season saw United claim a League Cup and Europa League double, though these remain the only pieces of silverware since his return to English football.

The Frenchman has shown flashes of brilliance in his three seasons in the Premier League, though he must prove he can deliver consistently be considered amongst the very best.