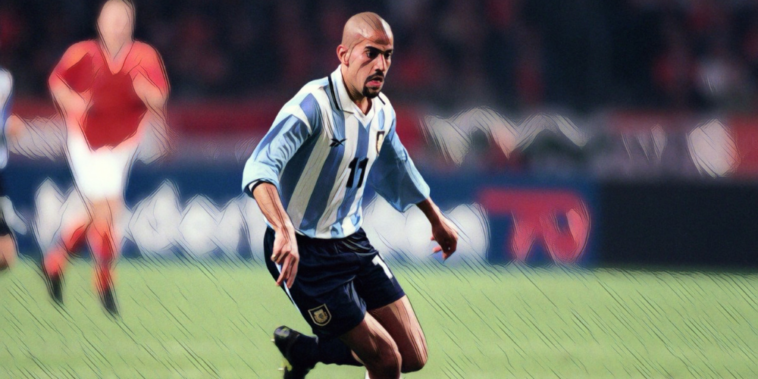 Tedious as it is, there is often an argument from sections of English football fans that lean towards a player’s time on these shores as the defining part of their legacy.

Take for example the endless GOAT debate surrounding Lionel Messi and Cristiano Ronaldo. Advocates of the latter’s claim to football’s all-time throne often use his Premier League spells as a barb towards Messi, his career all but recently spent in the ‘comforts’ of Barcelona and the Camp Nou.

Ignoring that Messi was at the forefront of Barcelona’s greatest ever era and has enjoyed a career of unprecedented standards, his refusal to depart Catalonia for the proverbial cold and rainy night at Stoke is used as a bizarre stick with which to attempt to beat his genius.

One of the most gifted midfielders of his generation, Veron’s indifferent performances as a Premier League player have often seen his wider achievements discredited in the eyes of arrogant English.

Arriving at Manchester United as the most expensive footballer in British football history in 2001, he failed to truly live up to expectations, one of the first notable instances of a marquee arrival from foreign shores failing to find their feet in the Premier League.

Veron, however, was simply the wrong fit at the wrong time for the Red Devils, his career having been one predominantly of mesmeric ability when taking possession of a football.

Veron was born in La Plata, the capital city of Buenos Aires Province in Argentina, and from an early age there were already significant expectations on the emerging talent.

His father, Juan Ramón, had secured iconic status at Estudiantes, the club where Juan Sebastien began his own footballing venture. Whilst the former had become a club legend over three separate spells with the side, the latter’s initial period with Estudiantes proved brief.

Veron’s first season in the senior side ended in relegation, before forming part of the team that bounced back to the Primera División at the first attempt, the performances of the teenage midfielder attracting interest from Boca Juniors.

A deal was agreed and Veron featured alongside Diego Maradona during his brief time at Boca, but a move for Europe quickly beckoned and in 1996 he signed for Sven-Göran Eriksson’s Sampdoria.

The move to Italy was a big step for the emerging Veron, who began to showcase his talent in an overachieving side, conducting the play from midfield and showcasing his mix of technique, awareness and physical strength.

Two seasons with Sampdoria saw Veron become in demand once more, the nomadic existence of his early career seeing the midfielder join divisional rivals Parma, where he formed part of a cult side still fondly looked back on with nostalgia.

Parma’s squad featured a host of names that would become defining players in their era, from Gianluigi Buffon and Fabio Cannavaro, to Hernan Crespo and Lillian Thuram.

Together that side oversaw the greatest period in the club’s history, with Veron at the core of a team that secured a Coppa Italia and UEFA Cup double in 1998–99, supplying the ammunition for compatriot Crespo in attack.

Veron was arguably the epitome of a cult figure in a cult side, tall but silky and adorning a signature goatee and socks rolled low round the calves, he dictated proceedings in an often nonchalant manner, floating freely around the pitch.

Parma’s iconic side was ultimately dismembered as the club ran into financial issues, but Veron’s departure came prior to their demise following the turn of the millennium, reuniting with Eriksson at Lazio in 1999.

Prised from Parma’s double-winners for a fee of £18m, it was a substantial investment for the capital club but one that would be rewarded following an unforgettable debut season.

Veron was the driving force as Lazio won only a second Serie A title, overturning a nine-point deficit on Juventus with just eight games remaining to snatch the Scudetto.

Veron’s midfield partnership with Diego Simeone provided a perfect blend of technique and tenacity, the former scoring 10 goals across all competitions as Eriksson’s side secured a domestic double.

Orchestrating proceedings from the centre, he was arguably Italian football’s most influential footballer, exerting control as I Biancocelesti were crowned champions on the final day of the season.

From the invariable perfect weight of his passes to the set-piece specials and moments of extraordinary vision, Veron was the creative hub of Lazio’s best side of the modern era.

Veron’s time with Lazio was the zenith of his time in European football, his performances outstanding even if there was trouble off the pitch, finding himself embroiled in a fake passport scandal for which he was later acquitted.

Lazio were unable to defend their title the next season and in 2001 came Veron’s biggest move, as Manchester United made the midfielder the most expensive footballer in British football history.

Veron was a superstar signing, attracted from a division that had housed the world’s best across the previous decade and arguably the first instance of a world star choosing the Premier League at the peak of their powers.

It’s a testament to the talents of the Argentine that Sir Alex Ferguson sought to spend £28.1m to prise him from Rome, given a midfield contingent that already included Roy Keane, Paul Scholes and Nicky Butt at Old Trafford.

United had just claimed their third Premier League title in succession and the signing of Veron – one greeted with huge excitement – was designed to help the Red Devils re-conquer the continent.

Veron’s finer performances often came on the European stage, the slower tempo suiting the style of a footballer who had shone in the more measured pace of Serie A.

Often forgotten, however, is the bright start Veron made during his time in the Premier League, scoring three times in four fixtures to be named as September’s Player of the Month.

He registered an assist for Ryan Giggs on his second appearance at Blackburn, before opening his goalscoring account with the opener against Everton, following a sharp one-two with Keane on the edge of the penalty area.

Goals against both Newcastle and Tottenham followed, the latter the Red Devils’ fourth as Ferguson’s side overturned a three-goal half-time deficit to win 5-3 at White Hart Lane.

Arguably his finest display for the Red Devils came during a Champions League quarter-final clash with Deportivo La Coruna, providing a hat-trick of assists – including an outrageous outside-of-the-boot pass into Ole Gunnar Solskjaer – as United progressed to the last four.

It’s the 18th anniversary of this Juan Veron assist.

What a fucking ball, son.pic.twitter.com/RXBzvSfHFm

Veron was spellbinding when in the groove but his sublime best proved sporadic, and as United relinquished their grip on the title to Arsenal and ended the season without silverware, Ferguson was infamously forced to defend his marquee arrival following an underwhelming debut campaign.

“He [Veron] is a f*cking great player” Ferguson snapped at the journalists in attendance.

“And you’re all f*cking idiots.”

Finding Veron’s role in the side became a puzzle for which Ferguson struggled to find a solution, and accommodating the Argentine alongside both Keane and Scholes proved challenging.

Having endured a mixed first season in English football, he was criticised for his performances in Argentina’s disappointing 2002 World Cup campaign, as La Albiceleste were eliminated in the group stage, their tournament including losing to England courtesy of a penalty from teammate David Beckham.

Veron formed part of a talented group of Argentina players who failed to make a significant impression on the global stage, featuring at three World Cups without reaching the latter stages during a career of 72 caps and nine goals.

Cultural differences and a language barrier played their part in Veron’s ultimately failed adaptation to the Premier League upon his return to club football, despite his second season ending with a Premier League winners’ medal as the title was reclaimed.

Beckham on the bench? Veron stepped up 🎯#MUFC #GoalOfTheDay pic.twitter.com/B41tBLvvkC

Just two seasons after his record-breaking arrival, however, he was allowed to leave, signing for Chelsea as a new era was ushered in at Stamford Bridge.

Roman Abramovich’s billionaire takeover provided the west Londoners with huge resources, with Veron amongst the first major signings of the new regime.

He scored on his debut as Chelsea beat Liverpool at Anfield, but fitness issues plagued his single season in the capital, making just 15 appearances across all competitions.

Veron perhaps arrived in England at the wrong time, straddling a period between domestic traditions and increasing influence from across Europe, as midfield threes became commonplace soon after his exit.

Returning to Italy to sign for Inter Milan on loan, he rejoined a league which had brought the best from him and it led to an upturn in fortunes. He featured prominently across two seasons and formed part of the side crowned Serie A champions in 2005/06, before the lure of Argentina saw the midfielder head home.

Returning to Estudiantes on an initial loan deal, the latter stages of Veron’s career saw him follow in his father’s footsteps to become an all-time icon at his hometown side.

Working under the tutelage of former Lazio teammate Diego Simeone, the midfielder’s return coincided with a first league title in 23 years. Further success soon followed despite Simeone’s exit, including a first continental title since the golden era of Veron’s father four decades earlier.

Not since Juan Ramon had inspired the side to three consecutive Copa Libertadores had Estudiantes been crowned South America’s finest, but the wait was finally ended in 2009.

Juan Sebastien was the architect of an incredible triumph, the 34-year-old named as Player of the Tournament after providing the assist for the final winner against Brazil’s Cruzeiro.

He added another domestic title in 2010 before hanging up his mercurial boots for the final time, later taking up a position as club chairman, a role in which he remains.

Veron’s final chapter with Estudiantes was a fitting conclusion to one of the most fascinating Argentinean talents of modern times, a midfielder who conquered one of European football’s major leagues before earning heroic status at the club where it all began.

Regardless of common perceptions over his time in English football, there is little arguing that Ferguson’s tirade at the press was unerringly accurate. Expletives left aside, Veron was indeed a great player, and those who doubted him paid little attention to a captivating career of creative quality.