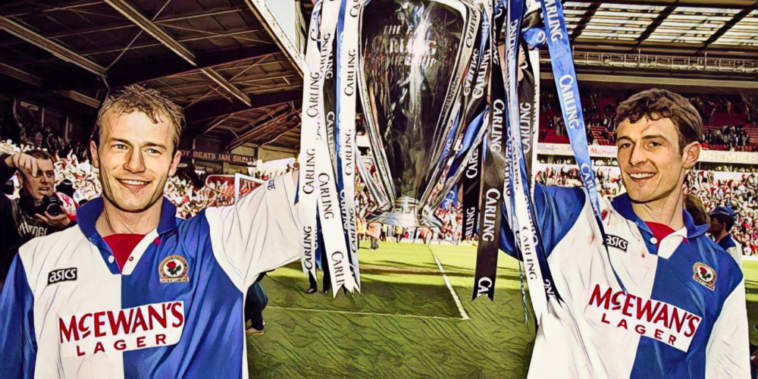 In the early nineties Jack Walker oversaw a revolution at his beloved Blackburn Rovers. The industrialist took charge of the Lancashire side and dared to dream about taking the team to the top.

His was a reign that transformed the outlook of English football and the newly-formed Premier League, happy to take on whatever cost in his bid to bring Blackburn to the summit of the game.

Walker’s millions put the noses of England’s traditional giants out of joint and funded the most memorable era in Blackburn’s modern history, with two signings in particular credited with inspiring the rise and rise of Rovers.

In the space of three summers Blackburn twice broke the British transfer record, as an unfashionable club made ambitious moves in the transfer market.

Alan Shearer arrived from Southampton ahead of the Premier League’s inaugural campaign, before Chris Sutton signed from Norwich in 1994 to provide further foil for free-scoring forward.

Their partnership, dubbed the ‘SAS’, became a lethal combination that became one of the Premier League’s best.

Shearer’s arrival came after a promising emergence at Southampton, with Blackburn beating off competition from Manchester United to sign the forward.

Blackburn’s rise had accelerated before Shearer’s signing, but the addition of the Geordie goal-getter provided the side with a focal point to make an immediate impression in the top division.

The rest is history ⚽️🏆 pic.twitter.com/bqVuwb17R6

Rovers had narrowly escaped relegation to the third tier in 1990/91, before Walker financed a promotion-winning season the following campaign after luring Kenny Dalglish to Ewood Park as manager.

Blackburn ended the season in a respectable fourth, before improving the following season with Shearer back among the goals. He scored 31 times in the Premier League in 1993/94 to win the Football Writers’ Association Footballer of the Year, as Rovers ended the season as runners-up to Manchester United.

In search of success and making the final step from challengers to champions, Walker sanctioned the £5m signing of Sutton from Norwich.

Sutton had spent some of his early career at centre-back, but a return of 25 league goals the previous season saw him find his home at the opposite end of the pitch.

“Kenny Dalglish was an integral part in me going to Blackburn Rovers, a side that had been pushing for the title in the previous season,” Sutton said on his decision to move to Ewood Park.

“Blackburn at that time had been the big spenders. Shearer had gone in I think a season or two earlier and had been superbly prolific in the 93-94 season, and the chance to play with Alan was a big thing.

“But as a young man that grew up watching Kenny Dalglish, the chance to play for Kenny was massive. I spoke to him on the phone for the best part of an hour, and to be honest I couldn’t understand a word he said, but I still ended up signing for them.”

It took little time for a fledgling partnership to show signs of life. Their first fixture in tandem saw Sutton assist Shearer with a flicked header, a recurring theme from a season in which the two bullied Premier League defences.

Each netted in the following fixture against Leicester as Blackburn emerged as genuine contenders. Sutton scored a hat-trick at home to Coventry as Blackburn continued their unbeaten start to the Premier League season and the two combined to score 16 goals across the opening 10 fixtures.

“He wasn’t necessarily my favourite partner, but we worked so well together and won a league title,” said Shearer, speaking to the Match of the Day top 10 podcast.

“We had a great understanding and the way we both played was ideally suited to the way the team played.

“He was just quite happy to drop in too, when we didn’t have the ball, and was happy for me to occupy the centre-halves, so from that point of the view the partnership was perfect.

Shearer ended the season as the division’s leading scorer with 34 goals to win a maiden Golden Boot and the PFA Players’ Player of the Year award.

Sutton scored 15 goals of his own in the Premier League, whilst each ended the season in double figures for league assists as their combination proved English football’s most effective.

The solid spine of Dalglish’s side that ran from Tim Flowers in goal, Colin Hendry in central defence and Tim Sherwood in midfield was spearheaded by the ‘SAS’ partnership, each feasting on the service provided from the flanks.

Excellent in the air and robust in their approach, it was a partnership that flourished in an age where 4-4-2 dominated the Premier League landscape and a winger’s primary task was consistent deliveries into the penalty box.

Their union was a blend of deceptive strength and speed alongside penalty-box prowess, with Sutton’s more sacrificial style bringing the best from Shearer as the latter equalled the Premier League’s single season goal record.

Shearer and Sutton directly combined for 13 goals during the 1994/95 season, a record which lasted more than 25 years until Harry Kane and Son Heung-Min bettered their season of synchronised scoring.

Despite twice losing to Manchester United, Blackburn held off the challenge of the defending champions to claim the Premier League title on the final day of the season.

Defeat at Liverpool proved irrelevant as the chasing Red Devils dropped points at West Ham, a result which crowned Rovers as champions of English football for the first time in 81 years.

That season proved the high and somewhat end of their prolific partnership, as Sutton struggled with injury problems the following season and Shearer departed in 1996 after a second successive Golden Boot.

The latter moved on to Newcastle in a £15m world record deal after scoring 112 goals in just 138 league appearances across his four seasons at Blackburn, ending his career as the record goalscorer for both Newcastle and the Premier League after a decade at St James’ Park.

Sutton returned to form in 1997/98 and won the Premier League’s Golden Boot alongside Michael Owen and Dion Dublin, before making an ill-fated £10m move to Chelsea after a declining Blackburn were relegated the following season.

He enjoyed a renaissance at Celtic as he formed another iconic understanding with Henrik Larsson, again proving the ideal facilitator to a fine finisher at Parkhead.

Such is the esteem that Blackburn’s ‘SAS’ partnership of Shearer and Sutton is still held in, it can be easy to forget their bludgeoning best lasted little more than one season at Ewood Park.

It was that season, however, that the goals of Shearer and Sutton allowed Jack Walker’s dreams to unfold as his beloved Blackburn upset the established order of England’s elite.