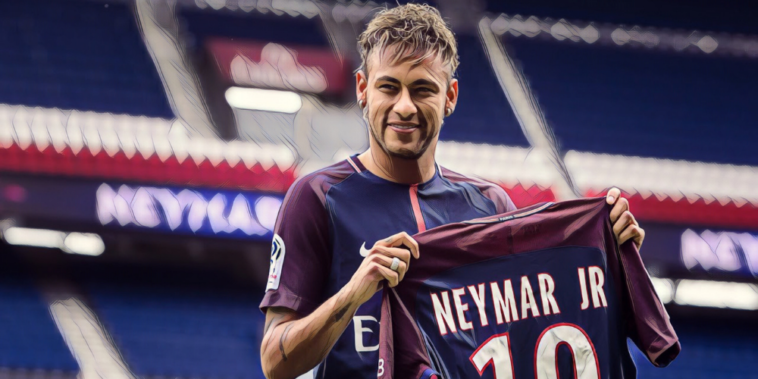 Football clubs across the world have spent extraordinary sums on transfers in recent years, the upward trajectory of transfer records having continued at a steep incline since the turn of the century.

The current financial impact of the pandemic has perhaps prevented new landmarks from being set, but few would bet against record-breaking sums returning in the coming seasons as Europe’s elite splash the cash to attract top talent.

The prospect of a £100m+ player seemed absurd only a few years ago, though it has become the going rate for the world’s very best footballers in modern times.

We’ve decided to look back at the progression of the world transfer record since 2000.

Hernan Crespo became the world’s most expensive footballer in the summer of 2000 after signing for Lazio in a £35m deal, the forward having scored 80 goals in just 151 appearances for a cult Parma side during the late nineties.

Crespo’s transfer eclipsed the £32m Lazio had received from Inter Milan for Christian Vieri the previous season and the Argentine proved the perfect replacement for the departed forward, scoring 26 league goals during his maiden campaign to finish as Serie A’s leading scorer.

Crespo arrived at a Lazio side that had won the title the previous season and boasted names such as Pavel Nedved, Alessandro Nesta and Juan Sebastien Veron, but overspending during the previous decade soon caught up with the club as their assets were sold on over the following seasons.

Their world-record signing scored 48 goals in 73 appearances across two seasons, though was sold on to Inter Milan for a reduced fee as Lazio sought to cover costs and combat spiralling debts.

Crespo’s status as the world’s costliest transfer lasted just 11 days, as a stunning transfer in Spain soon dominated the headlines.

Figo had been the star turn in a talented Barcelona team throughout the nineties, winning two league titles, two Copa del Rey trophies and the UEFA Cup Winners’ Cup amongst his honours in Catalonia.

The Portuguese playmaker then did the unthinkable after signing for arch-rivals Real Madrid in a world-record deal, a transfer which remains one of the most controversial in football history.

Figo won two league titles and the Champions League with Los Blancos, before a successful four-year spell at Inter Milan that saw the star win Serie A in four consecutive campaigns.

Real Madrid smashed the world transfer record for a second successive summer in 2001, signing Zinedine Zidane from Juventus and uniting the midfielder with Figo in a star-studded midfield.

Zidane has established himself as arguably the sport’s finest talent across the turn of the century, inspiring France to World Cup and European Championship success, in addition to his exploits in Serie A.

Zidane made 230 appearances and scored 49 goals across five seasons in the Spanish capital, cementing his status as the best player of a generation and one of the game’s all-time greats.

Florentino Perez’s return to Real Madrid for a second stint as president saw a second Galactico era ensure, splashing out more than £200m on a host of marquee additions during the summer of 2009.

Kaka’s £56m arrival from AC Milan saw Zidane’s eight-year reign as the world’s most expensive footballer come to an end, the Brazilian having starred in the colours of the Rossoneri, winning the Ballon d’Or after inspiring Milan to Champions League success in 2007.

Despite flashes of his former self the Brazil international largely struggled to recapture the form that had once made him the world’s best, injuries restricting his influence as he scored just 23 league goals in 85 appearances across four seasons.

He returned to Milan for a short second stint in 2013, but was a shadow of the player who tormented defences at the peak of his powers.

Cristiano Ronaldo claimed Kaka’s crown as football’s most expensive talent after arriving at Real Madrid just a month after his new teammate, the Spanish side’s long pursuit of the Manchester United winger rewarded as an £80m deal was completed.

Even at the record-breaking price, Ronaldo’s move to Real must rank as one of the club’s greatest transfers as the Portuguese superstar smashed all manner of records at the Bernabeu.

ON THIS DAY: In 2009, Real Madrid announced the signing of Cristiano Ronaldo for £80m.

After nine seasons of incredible service the Spaniards sold Ronaldo on to Juventus aged 33, the €100m fee ensuring Real still made a profit on arguably the club’s greatest ever talent.

Real Madrid’s hold on the world transfer record extended following the signing of Gareth Bale, with five consecutive world-record transfers having seen football’s most expensive player head to the Bernabeu.

Bale had starred in the Premier League for Tottenham, winning two PFA Player of the Year accolades in just three seasons, before moving to the Spanish capital to provide his talents with a greater platform.

Forming a forward line alongside the aforementioned Ronaldo and Karim Benzema, his debut season ended in dream fashion, scoring a stunning solo goal to win the Copa del Rey final against Barcelona, before scoring as rivals Atletico Madrid were beaten in the Champions League final.

That success brought Real their fabled La Decima crown, whilst the Welshman would add a further three winners’ medals across the following seasons, scoring twice in the 2018 final win over Liverpool.

Bale has also won two league titles as part of 13 trophies in Spain, though his fortunes have dropped drastically in recent campaigns despite a record of 105 goals in 251 appearances for the club.

He spent the 2020/21 season on loan at Tottenham after falling out of favour with Zinedine Zidane, though may have a chance to regain his place following the appointment of former coach Carlo Ancelotti.

Paul Pogba returned to Manchester United from Juventus in an £89m world-record deal in 2016, just four seasons after leaving the Red Devils for Turin on a free transfer after becoming frustrated with a lack of opportunity at Old Trafford.

The Frenchman had flourished during his four seasons in Italy, winning four consecutive league titles and establishing himself as one of the best young midfielders in world football.

He won a League Cup and Europa League double during his maiden season with United – scoring in the latter final victory over Ajax – but further silverware has so far proven elusive during a transitional time for the club.

Pogba’s move was the first time since Alan Shearer’s 1996 move to Newcastle that a Premier League club had broken the world transfer record.

Neymar had formed part of a scintillating attacking contingent featuring Lionel Messi and Luis Suarez, but in search of winning football’s greatest individual accolades he opted to step out from the former’s shadow at the Camp Nou.

The fee more than doubled the previous record as part of an incredible window of recruitment for PSG, who also signed Kylian Mbappe on an initial loan deal that was made permanent for £163m the following summer.

Neymar has scored 87 goals and provided 52 assists in just 116 appearances for PSG, though the Brazilian has spent large periods on the sidelines and has not reached 20 league games in a season since his maiden campaign.

Defeat in the 2020 final also prevented PSG from securing the Champions League success the club so desperately craves and Neymar’s legacy may yet depend on whether he can lead the French side to European success in the coming seasons.