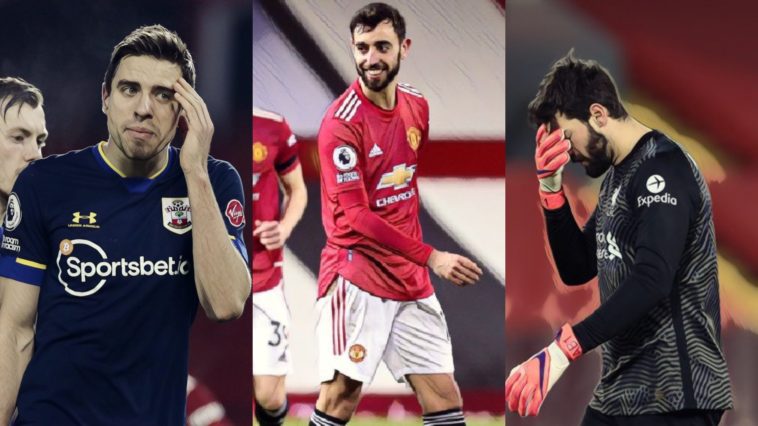 There can only be one contender, right? Manchester United’s 9-0 win wasn’t just remarkable because it was a record-equalling scoreline, but because of who it happened against: Southampton.

The Saints have been mightily impressive this season despite their lack of depth, a testament to the excellent work of manager Ralph Hasenhüttl. But that is what killed them at Old Trafford in midweek as they were missing six first-team players through injury.

When Alex Jankewitz got himself sent off for a dangerous challenge after just 79 seconds, it was always going to be a tough night for the visitors. But when Jan Bednarek also got sent off in the second-half, it felt inevitable that they would suffer the very same scoreline that they did against Leicester City in 2019.

🍰 And deep into stoppage time, @Daniel_James_97 added the cherry on top with this cheeky finish 😎#MUFC pic.twitter.com/AlXBrJXfGw

The road back from this will be even longer and harder than before.

Fernandes would probably feel rightly miffed at his exclusion here, but his performances are in the context of Manchester United playing very well as a whole. Dominic Calvert-Lewin, on the other hand, has been pulling it out of the fire lately while those around him have been utter pants.

Everton didn’t play to their best against Leeds United in midweek, but won anyway with one of their two goals coming from their star striker, while they looked absolutely hopeless in the first-half against United at the weekend.

The Toffees improved after the interval, however, and Calvert-Lewin provided the cross that eventually fell to Abdoulaye Doucouré via David De gea’s fatal parry for their first goal. His last-minute equaliser will surely go down as one of his moments of the season, too, saving his side at the death.

To make it all the more remarkable, that was his only shot of the game.

It was a week chock full of veritable golazos, but Bruno Fernandes, as he so often does, took the biscuit with his fabulous finish against Everton.

The goal was magnificent from start to finish, beginning with his clever dummy, continuing with his fake cross and ending with a beautiful strike of the ball. It was Cantona-like in its insouciance, Beckham-esque in its execution.

The whip and the dip 💥

Something special from Bruno Fernandes 🙌

The Manchester United playmaker’s compatriot over at Wolves deserves some of the limelight too after Joao Moutinho smacked one in off the post during their 2-1 comeback win over Arsenal.

Joao Moutinho pulls one right out of the top drawer 😍

Aaron Ramsdale has endured a difficult campaign, as has every Sheffield United player, but his superb save when the game was at 1-1 in midweek was crucial. The Blades went on to beat West Brom 2-1.

There is an absolutely doozy of a line in the below piece of audio from Aston Villa’s John McGinn.

An argument between Sean Dyche & John McGinn is the exact type of content I needed today 🤣 pic.twitter.com/iAV4Qk5BaZ

Usually so reliable from the spot, Ilkay Gundogan won’t want to relive this penalty miss. He more than made up for it with a brace, though.

❌ Fabinho fouls Sterling to give City a golden chance from the spot but Gundogan spanks his penalty over! An Anfield curse…

Every goalkeeper’s brain seemed to fall out of their heads last week as there was an avalanche of mistakes from shot stoppers. Let’s begin with whatever Arsenal’s Bernd Leno was doing here against Wolves.

Things go from bad to worse for Arsenal…

A moment of madness from Bernd Leno sees the Gunners reduced to nine men 😬 pic.twitter.com/lz1rKRaFQ8

Then on Saturday David De Gea turned in a nightmare performance against Everton. His weak parry from a Calvert-Lewin cross fell directly to Doucouré to tap in, and he was far too slow to close down the striker in the final minute of the game, costing Man United two points. Harry Maguire was at fault as well for keeping the goal scorer onside, but De Gea ultimately had to make the stop.

"David de Gea has to do a lot better than he does."

Abdoulaye Doucoure is there to convert the rebound as Everton score on the break!

But the crown goes to Alisson Becker, who made two inexplicable errors against Man City on Sunday. The Brazilian made the same mistake twice, passing it directly to the opposition to give them perfect scoring opportunities.

Here are his 2⃣ costly errors against #MCFC as he handed the visitors two goals in quick succession! 😮 pic.twitter.com/xaR9Vz3dHw

We don’t mean to pick on Jan Bednarek, but he had a truly horrific week on the pitch. Firstly, the Polish defender not only lost 9-0 to Manchester United, but he became the first player in Premier League history to score an own goal, give away a penalty and get sent off in the same match. Is there a more unwanted piece of history in football?

It didn’t get much better for him at the weekend, as Southampton conceded three times in the first-half to Newcastle United. Bednarek got skinned by Allan Saint-Maximin in the build-up for the opener, before deflecting Miguel Almiron’s shot into the net for the second. Mercifully that one was not chalked up as another own goal.

See Also: Tweets of the Week: Dyche’s lookylikeys, deja vu for Southampton, and the Carlisle curry