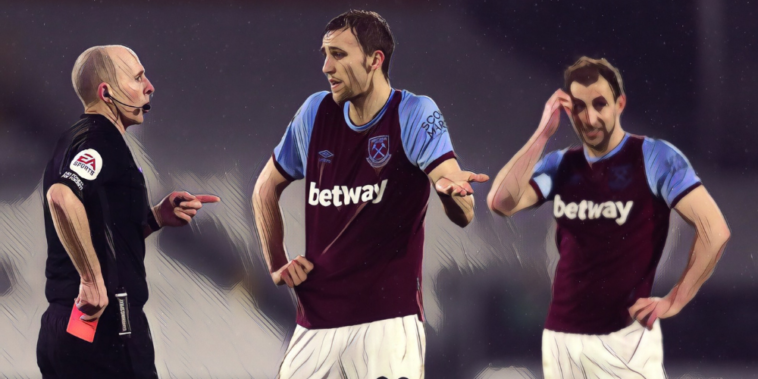 West Ham have been successful in their appeal against Tomas Soucek’s suspension following the midfielder’s sending off in the club’s goalless draw with Fulham.

Referee Mike Dean was at the centre of a controversial decision to dismiss the Czech Republic international in stoppage-time at Craven Cottage, following an incident which saw the midfielder accidentally catch Aleksandr Mitrovic with an arm.

Dean was later been informed by authorities at PGMOL that his decision was incorrect and West Ham have successfully appealed the decision with an independent panel deciding against upholding the midfielder’s punishment.

Soucek has now had his three-match ban rescinded, freeing the midfielder to play in the Hammer’s FA Cup clash with Manchester United on Tuesday and Premier League clashes with Sheffield United and Tottenham at the London Stadium.

The incident was the second controversial red card Dean has issued over the past week after also sending off Southampton’s Jan Bednarek against Manchester United and both decisions have since been overturned.

Sky Sports have also confirmed that Dean will not referee in the Premier League this weekend, following a request not to officiate after receiving death threats in the latest incidents set to shine an unwanted spotlight on social media and its lack of controls.