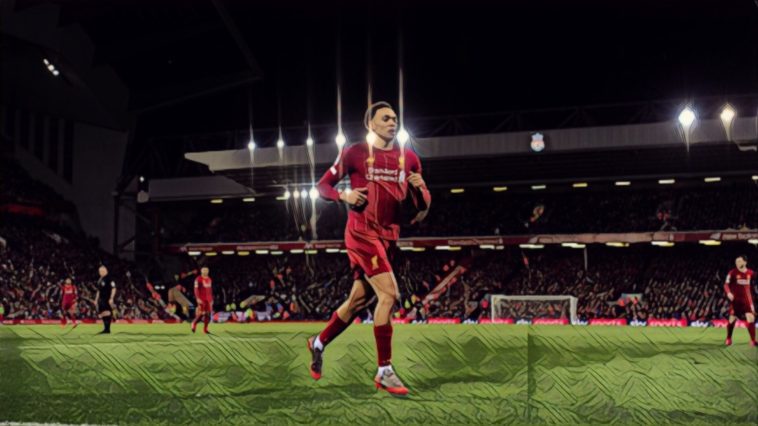 Some of the standout statistics from another week of Premier League action, featuring Trent Alexander-Arnold’s importance to Liverpool, comparisons between Arteta’s Arsenal and Ancelotti’s Everton, Man City’s misfortune with penalties, and Frank Lampard’s record against Jose Mourinho.

We need to talk about the Player of the Year

Last week Raheem Sterling complained about the lack of recognition Manchester City‘s players have gotten for their stellar performances over the past few seasons. He cited the fact that, despite winning the Premier League twice consecutively, no one from the club has won the PFA Player of the Year during that time.

While the wide forward has a point, he is just going to have to live with the way things played out. Mo Salah and Virgil van Dijk had two tremendous individual seasons back-to-back and it was hard to argue against them winning the award. This writer agrees that it’s peculiar that such a phenomenal team who dominated for two years wouldn’t get the individual recognition that other great sides have gotten over the years.

In my opinion, Man City fell foul of having too many outstanding performers in the one team. Who truly stands out among a squad of phenoms – Sergio Aguero, Ederson, Kevin De Bruyne? Sterling made the strongest case last year, but neither he nor his teammates shone so bright in their own right that they were undeniably the best of the best.

Ironically, something similar is happening to Liverpool this year. Their incredible run this season has been the result of an indefatigable team ethic and spirit rather than being spurred on by the individual prowess of one or two players. This is why Jordan Henderson has emerged as the frontrunner for the Player of the Year award – he is far from the best footballer in the division, but there is something about the Sunderland native that embodies a lot of the qualities that define Jurgen Klopp’s team.

In reality, if Henderson is going to win it, then it might as well go to De Bruyne, the man most likely to beat Thierry Henry’s assist record and the only non-Red in the top five favourites. Unfortunately for the Belgian, he does not seem set to benefit from the same circumstances that Salah and Van Dijk did and the award appears destined for Anfield for a third year running.

If that is the case, then perhaps it should go to someone who hasn’t been given serious consideration for the gong: Trent Alexander-Arnold. The right-back supplied a brace of assists in Liverpool’s 4-2 comeback win over West Ham United on Monday night, giving him 12 assists for the campaign, the same amount he accumulated last season, with 10 games to go.

It is only the fifth time a defender has reached double digits for assists in a campaign and he is the first to do so twice. Since the beginning of last season, he has assisted 24 goals, more than any other player.

defenders with more than 10 assists in a PL season

It is not just the raw numbers that impress the most, though. His ability on the ball, the timing of his runs and, of course, his delivery are exceptional; his no-look cross for Georginio Wijnaldum’s header was one of the highlights of the match. The influence he exerts on this team is mind-blowing and they would have dropped a lot more points without him – he might just be their most important player this season.

And the guy is only 21. For the Liverpudlian to win, it would break the mould in a few ways; no one has ever won the award at his age in the Premier League era, and no one has won it as a full-back. That might be tall a task for the youngster, but we need – at minimum – to include him in that conversation.

Meanwhile, Liverpool’s overall statistics are as insane as ever. They have now won 18 consecutive Premier League games, equalling the record for longest winning streak. They have won 21 straight league matches at Anfield, as well as going 54 unbeaten at the ground. They are now 44 games unbeaten home and away, putting them just five games off Arsenal’s record.

Remembering every PFA POTY from the past decade

Back in December Mikel Arteta and Carlo Ancelotti were sitting in the stands watching the respective teams they were about to take charge of duke it out in a sterile, lifeless encounter that illustrated the breadth of the task facing them.

Two months on the same two sides took each other on once again and the fare on offer could not have been more contrasting. Instead of a scoreless draw, we got an enthralling five goal contest which showed how much of an effect the new managers have had.

Under Arteta, Arsenal have lost just one league game, winning three and drawing five, and are unbeaten in 2020. An eye-catching statistic since he’s come in is the fact they have kept six clean sheets in 11 games in all competitions. Considering the state of that defence, which conceded 30 shots to struggling Watford in September, that is a remarkable turnaround the Spaniard has managed to implement.

There's just something about Arsenal number 14s and ???? finish…

Although they will no doubt be disappointed with the 3-2 defeat, Everton have won more points than the Gunners in the same period and can genuinely count themselves in the wide open competition for European qualification. There were question marks over Ancelotti’s appointment at the time, but he has made them the third best team in the league on form over the past nine fixtures.

The Toffees continued a desperate trend on Sunday, however, which is their awful form away to Arsenal. They have never won at the Emirates Stadium and have not won at the North London outfit for 23 years, when Bruce Rioch was the manager at Highbury.

With Arteta at the helm, Arsenal’s future is looking bright

Last season Manchester United won more penalties than any other team in the top flight, taking 12 and scoring nine (Crystal Palace were second with 10 goals from 11 spot kicks). This made a reasonably substantial contribution to the Red Devils’ mid-season surge before finally finishing fifth. During the early stages of this season, I wrote that they would have to be extremely lucky to win so many again in this campaign and they could hardly depend on them to win games to the same extent.

Oh, how wrong I was. United have won 10 penalty kicks already this season and it’s only February, meaning there’s a good chance they will at least equal last season’s tally. Unfortunately for them they have been less successful from the spot this time around, missing four of their attempts.

Bruno Fernandes was their fourth penalty taker of the campaign, slotting home against Watford with a cheeky Jorginho-esque attempt. The Portuguese midfielder is the first United player to score his first goal for the club from the spot.

While United’s recent penalty record is not especially impressive, Manchester City’s is even worse. They have won the second-most, taking seven penalties and scoring just three. The reigning champions have had four different takers in the league: Gabriel Jesus, Ilkay Gundogan, Raheem Sterling and Sergio Aguero, all of whom have missed at least one attempt each.

Aguero was the latest, his shot being saved by Leicester City‘s Kasper Schmeichel at the weekend. It’s incredible that a team loaded with so many outstanding, world-class talents should find it so hard to score a penalty. Kevin De Bruyne is surely the next man on the list to step up, although Pep Guardiola has previously mentioned that goalkeeper Ederson is in fact the best penalty taker in the squad. We can only hope we get to see that happen before the season ends.

The irony is that City began the season with a shootout win in the Community Shield against Liverpool, the team who are now leaving them for dust in the table (and, of course, have a 100% record from the spot this year with five from five).

Lampard lords it over Jose

Neither Chelsea or Tottenham Hotspur have enjoyed the smoothest 2020 up to this point, but Frank Lampard did at least get a mightily relieving 2-1 win over Jose Mourinho on Saturday afternoon.

This was the third time Lampard has bested his former boss – a penalty shootout victory in the League Cup last season when the former midfielder was at Derby County and the Portuguese was at Man United, and a league win earlier this season – giving him a 100% record against the three-time Premier League champion.

One of the biggest factors in securing all three points was the inclusion of Olivier Giroud, who was handed just his third start of the season. The Frenchman scored the opening goal of the game with a superb finish – his first of the season – and was involved in the buildup for the second.

Giroud had two shots on target on the day, which is as many as Michy Batshuayi has had all season, and has four in total in his 284 minutes on the pitch. He has been starved of game time this season while Lampard looked for a way to offload the 33-year-old, but he could offer a solution to his striker issues while Tammy Abraham works on getting back to full fitness.

Read: Are Man City dragging the Premier League into a Cold War with Uefa?