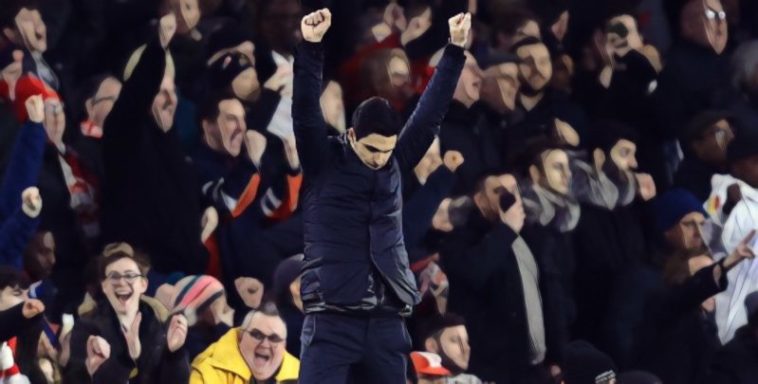 If Liverpool remains unbeaten in the Premier League this season they will be the first team to do so since Arsenal in 2003/04. That the Gunners could ever achieve such a feat is a fact that – in the context of the club’s recent history – is astonishing.

The resilience and ruthlessness that the club embodied in that Invincibles season have been sorely absent at the Emirates in the tame second act of Arsene Wenger’s reign and the muddled tenure of Unai Emery.

Character and drive are often reductive cliches in football, but in the case of Arsenal, they are genuine necessities. Not just amongst the playing staff, but throughout the club hierarchy, which has failed to function with the necessary clarity, efficiency, and direction demanded by a club of Arsenal’s stature.

To conduct a true rebuild of the club, one that can place them in the conditions for sustained success, Arsenal needed a manager who would be the paragon of the club’s new identity and outline a clear strategic vision for the club both on and off the pitch. In Mikel Arteta, Arsenal may have found the ideal candidate to fulfil this role.

The glaring flaw in Arteta’s resume is his lack of experience. While we can infer little from his playing career, as attributes he exhibited may not translate to management, his time at Manchester City is instructive.

When he was at Bayern Munich, Pep Guardiola requested the then Arsenal skipper to become a member of his coaching staff if he ever moved to England. Upon his arrival at Manchester City, Arteta was swiftly made assistant coach. That a coach as acclaimed and successful as Guardiola would be so eager to work with Arteta speaks volumes in and of itself. Yet Arteta’s role in guiding the club to two Premier League titles is all the more impressive.

The hallmark of his time at City was his man-management. Arteta would frequently meet one-on-one with players, providing them with confidence while also using his tactical acumen to identify the weaknesses in a player’s game and propose solutions.

Discussing the vulnerabilities of players, especially those of Manchester City’s quality, can be a sensitive topic, yet Arteta was still successful. Both Raheem Sterling and Leroy Sane have remarked how they benefited as players due to long one-on-one meetings with Arteta, while the likes of Gabriel Jesus, Fernandinho, Fabian Delph, and Oleksandr Zinchenko have also reportedly made strides in their games due to Arteta’s influence.

11 games under Mikel Arteta and Arsenal have kept 6 clean sheets.

Incredible turn of form from a team which were conceding thirty shots to Watford under Unai Emery.

The tactical insight and interpersonal skills that made Arteta vital to Guardiola’s coaching staff will be integral to his success as a coach. While the impact of his man-management is difficult to ascertain at present, he has already made a clear tactical imprint at the club.

The consistency with which Arteta has deployed a 4-2-3-1 is alone a welcome feature of his management, as his predecessor’s frequent tinkering often led to a lack of continuity and clarity in Arsenal’s approach. The system is intelligently devised, with players taking up positions on the pitch based on their individual strengths, the movement of their teammates, and the tactical principles of their manager.

Pierre-Emerick Aubameyang nominally starts on the left-hand side but has the license to move into more central areas to act as a more traditional striker when Arsenal are in possession. With Nicolas Pepe providing width on the right-hand side, Arteta ensures that his side maintains balance in the wide areas by encouraging converted winger Bukayo Saka to push high and wide from fullback.

In order to maintain defensive solidity, Granit Xhaka often pulls back from his nominal role in the double pivot into the left-half space to cover the forward runs of Saka. This can leave Arsenal outnumbered in central midfield, but by using right-backs Ainsley Maitland Niles or Hector Bellerin as an inverted fullback – a tactic synonymous with his mentor Guardiola – Arteta ensures that his team holds a strong presence in all areas of the pitch.

This sequential style of player rotation also allows Arsenal to create overloads out wide, something that is presumably a key aspect of Arteta’s philosophy. With Saka pushing up from fullback, Aubameyang drifting between wider and central areas, and Mesut Ozil drifting wide from number ten, Arsenal can outnumber the opposition and manoeuvre possession effectively to create chances. They can also crowd the left-hand side before switching play to the right to exploit the available space.

? The football we love to watch at the carpet! pic.twitter.com/LAIamRxCRF

Arteta has also enabled the individual qualities of his players to shine. Xhaka’s tendency to occupy a deeper position means that he can receive the ball in space and use his superb passing range to dictate play. Ozil’s positional freedom allows him to get on the ball more and consequently maximize his creative output.

Aubaymeyang’s intelligent movement on the left allows both him and Alexandre Lacazette to pose as goal-scoring threats. Pepe’s tendency to stay wide allows him to get the ball in one-on-one situations. A central midfielder by trade, Maitland-Niles excels in the inverted fullback role, while Saka is also able to demonstrate the qualities that made him a promising winger in his advanced fullback role. Throughout the team, Arsenal’s players are able to play in accordance to their strengths.

Defensively, Arteta has received much acclaim for his ability to make Arsenal sturdier at the back. His emphasis on vertical compactness throughout the team’s shape, the imposition of a more assertive press, and the use of an attacking structure that leaves more men in defence and the midfield has facilitated improved defensive performances from the Gunners.

The press, in particular, has been impressive. Despite lacking the ideal personnel to utilize an aggressive counter-press, Arsenal has shown an ability to disrupt opposition build-up by harrowing the opposition centre-backs and blocking central passing lanes. It speaks not merely to Arteta’s tactical astuteness, but also his ability to get players to buy into his ideas and extract from them intense commitment and effort.

In periods of the game in which they press less, Arsenal falls back into a compact 4-4-2 that shifts horizontally to compress space when the opposition shifts the ball out wide. They are still susceptible to the conceding of goals playing in this manner, but this is more a reflection of Arsenal’s personnel rather than the system itself.

There are still question marks about Arteta’s future. Will he be able to develop Arsenal’s young players? Can he make sensible recruitment decisions? How will he respond when faced with more pressure? Can he adapt his style when necessary? Can he make his tactical changes long-lasting and a foundation for broader stylistic shifts?

Such queries are impossible to answer, but the initial signs are promising. Arteta clearly stands for something and is the sort of coach who Arsenal can build the club’s development around. He will likely fail to replicate Arsenal’s unbeaten season, but if he can restore the same mentality to Arsenal, his tenure will be a resounding success.