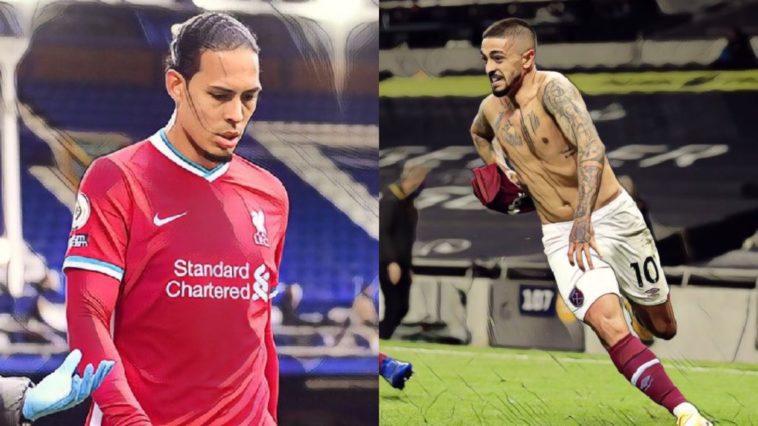 The pick of the best statistics from gameweek four of the Premier League, featuring the impact Virgil van Dijk’s injury will have on Liverpool this season and West Ham’s incredible comeback against Spurs.

How much will Liverpool miss Van Dijk?

It was a bad weekend for Liverpool: they had a winning goal controversially ruled offside, they remain three points off first place and local rivals Everton, and they received the news that Virgil van Dijk will have to undergo surgery to repair damage to his anterior cruciate ligament following a reckless challenge by Jordan Pickford.

It could well be a season-ender for the 2019 PFA Player of the Year, but what impact will that have on the Liverpool team in general? The Dutchman has been a mainstay in the team since arriving from Southampton in January 2018, missing just one league game for the Reds, and the statistics show he has been a rock in defence.

Since his Liverpool debut, only Aymeric Laporte (158) has a better minutes per goal conceded rate in the Premier League among centre-backs than his 111. In his 95 starts, they have conceded at a rate of 0.82 goals per league match, compared to 1.23 per match in the 95 games before he joined. They have also kept 43 clean sheets compared to 27.

Virgil van Dijk had played every minute in the Premier League for Liverpool since January 2018.

It’s not only at the backend of the pitch that Van Dijk has made an impact, however. Only Patrick van Aanholt (11) has scored more goals among defenders than his ten since January 2018.

But can Liverpool win without him? Well, in 130 games across all competitions that he has played, the team’s win rate is at an impressive 70%, while in 13 games without him that drops to 46%. Make of that what you will.

A decade of FSG at Liverpool: Suarez, Rodgers and the controversial transfer committee

Tottenham Hotspur were cruising to victory after just 15 minutes on Sunday when they raced into a 3-0 lead against West Ham United, and yet the game ended in a 3-3 draw to ensure the Lilywhites remain winless at home (two draws, one defeat).

The Hammers became the first team in Premier League history to not lose a match when trailing by three goals with nine minutes remaining. The last time Spurs were winning 3-0 at half-time and failed to win? The 5-3 defeat to Manchester United at White Hart Lane in 2001.

It was a bitter blow for Spurs, who were the better team over the course of ninety minutes. Once again Harry Kane and Heung-min Son linked up expertly, setting each other up for the first two goals. The pair have now combined for 28 goals, the fourth-highest goals combination of the Premier League era. It’s a remarkable tally considering they did not combine for a single goal during Son’s first campaign at the club.

Kane is now on 12 goal involvements for the campaign (five goals, seven assists), the most of any player after five games in a Premier League campaign. The England striker is now a dual threat, playing almost like a false nine to create space and lay on chances for Son, while still carrying that penalty box danger.

He’s hardly going to equal Thierry Henry’s incredible record of 20 goals and 20 assists in a single campaign… is he?

He has been dubbed ‘Penandes’ by opposition fans online, but the fact remains Bruno Fernandes is an excellent penalty taker – well, he usually is.

The Manchester United midfielder missed a spot kick for the first time since joining the club when Newcastle United goalkeeper Karl Darlow saved his attempt on Saturday. It ended a run of 21 consecutive penalties scored in all competitions dating back to October 2018, and it was the first time since 2016 he has missed a penalty in a league match.

The Portuguese did at least make up for his miss by scoring United’s third goal of the game with a lovely finish, his third goal of the season and his 15th overall since joining the Red Devils in January, as they ran out 4-1 winners.

19 – Bruno Fernandes has been directly involved in 19 goals in his 18 Premier League appearances for Manchester United (11 goals, 8 assists), scoring in each of his last three games. Redemption. pic.twitter.com/DzrRKaIf3C

15 essential tips to help you succeed at Fantasy Premier League

Back to the Merseyside Derby for our last round of stats to hail two excellent goal scorers. Dominic Calvert-Lewin kept up his great start to the season when he scored the Toffees’ second to earn the league leaders a point – the fourth successive draw between the two sides at Goodison Park.

The England striker has now found the net in five consecutive matches, and it is the first time an Everton player has scored in the opening five league games of a campaign since Tommy Lawton did so in 1938-39.

This was a classic derby between two sides that really went for it, producing more goals here than the past six at Goodison combined. Mo Salah nabbed his first ever goal at the ground in the 72nd minute and it was a special moment to do so, as it was his 100th in all competitions for the club. The Egyptian is now the third-fastest Liverpool player to reach a century.

23 – @LFC are now unbeaten in their last 23 meetings with Everton in all competitions, their longest run without defeat against a single opponent in the club's history. Domination. #EVELIV

Read: A decade of FSG: Klopp, Moneyball and the path to Premier League success

See Also: Why an unlikely trio of clubs are in the running for a title tilt