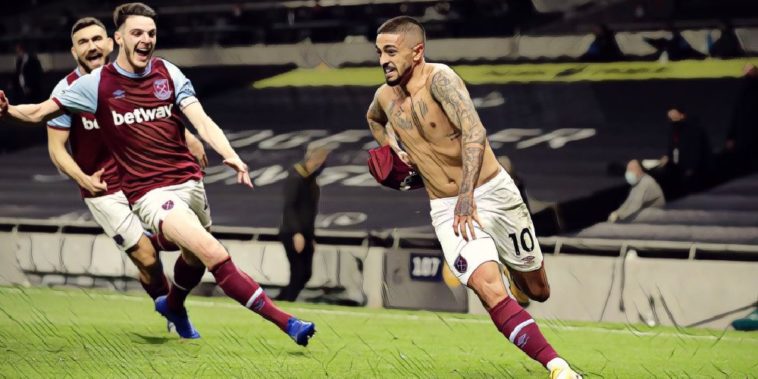 Manuel Lanzini struck a stunning 94th minute equaliser as West Ham came from 3-0 down to claim a dramatic point against Spurs in the latest London derby.

It was a dreadful start for West Ham as Spurs flew out of the traps and were ahead inside 45 seconds, the north London side winning the ball back on the edge of their own box, before Harry Kane played a quarterback style, raking ball over the Hammers defence to Heung Min Son, leaving the South Korean the task of beating his man and passing it into the back of the net which he did with aplomb.

Seven minutes later and it was two, Kane – once again involved in the build-up – received the ball 25 yards from goal, before popping it through the legs of Declan Rice and smashing it past the flat-footed Fabianski and into the bottom corner in trademark fashion.

⚽️ 5 goals
🅰️ 7 assists@HKane has been directly involved in 12 #PL goals this season, the most ever by a player in their opening five matches of a campaign ✨#TOTWHU pic.twitter.com/R8ILLJW50C

Two quickly became three in the 16th minute as Son received the ball between the lines, laid it off to the advanced Sergio Reguilon, the summer signing playing a perfectly weighted, first-time cross to the back post where an unmarked Kane headed past Fabianski with ease as Spurs looked like they were cantering to victory.

However, West Ham looked greatly improved from the offset of the second half, and had a great chance to pull one back in the 50th minute. The ever-dangerous Michail Antonio being shown onto his stronger foot only to see his floated effort headed over the bar by Pablo Fornals from close range.

The game looked to be fizzling out to a 3-0 win for Spurs, but then, with eight minutes to play, West Ham finally got on the scoresheet, an Aaron Cresswell free-kick being headed home by Fabian Balbuena.

While many were thinking that the goal was nothing more than a consolation, the Hammers pulled another one back three minutes later, a drilled cross by substitute Andriy Yarmolenki being turned into his own net by Davinson Sanchez.

Having been introduced as a second-half substitute, Gareth Bale had a chance to make sure of the points for Tottenham, the returning Welshman dribbling past two defenders and moving into the box, before putting his effort marginally wide of Fabianski’s left-hand post.

Bale was made to pay for his miss as the East London outfit completed the most unlikely of comebacks and in the most sensational and dramatic of fashions. Another Cresswell free-kick from the left was this time cleared by Spurs, only to be met by Manuel Lanzini who hit an absolutely unstoppable strike in off the bar to salvage a point with virtually the last kick of the game.

Speaking afterwards, ‘proud’ Hammers boss David Moyes was asked what he told his players at the half-time interval while questioning the standard of his side’s defending.

“The team talk was really difficult at half-time,” he told Sky Sports. “We were 3-0 down but played well, apart from the first 10 minutes. I didn’t think we needed to change anything. They got the first goal and we had a chance to make it 1-1 and from that they made it 2-0.

“Harry Kane was incredible today. So good. Up close he is a terrific player.

“We did what we did in the first half in the second. We thought we played really well. The defending we didn’t like but our play was very good. In the end we got some goals from it.

“As a manager at times it is hard to use the word proud, but tonight was a really proud moment to be manager of the team because of how they kept at it. It is a big result. Hopefully the supporters will have enjoyed it.”

The game was the latest high-scoring encounter in this season’s Premier League, and Moyes reckoned the goal fest was simply down to a lack of ‘good defending’ as players take ‘more risk’ in the empty stadia.

“I can’t work out if it is the quality of the forwards. I look it and see a lack of good defending,” said the Scot. “We didn’t defend well enough, but when you concede you are always looking at it. Whether it could be the crowds? But I put it down to defending. There is more risk being taken. Games are played very one end and the other end. It is exciting.”

Next up for the hammers is a tricky home tie against Manchester City in the Premier League next weekend.