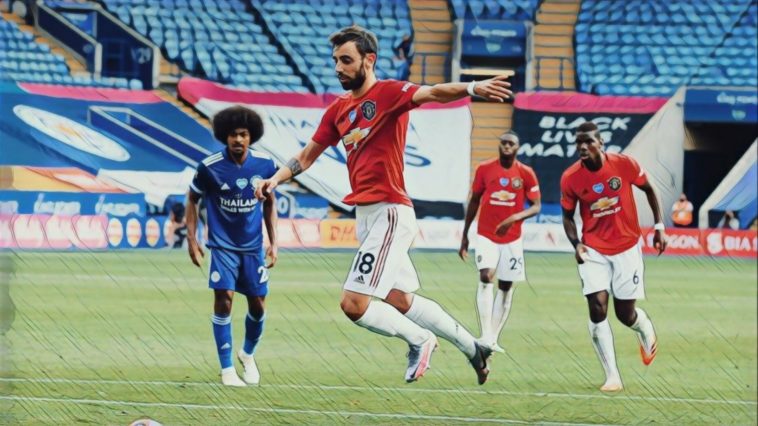 The standout statistics from the final day of the 2019/20 Premier League season, featuring Man United’s record-breaking penalty, Kevin De Bruyne breaking the assists record, and why Danny Ings is really the best striker in Europe.

Well, Manchester United did it, everyone. They won their first trophy of the season; they broke the Premier League record for most penalties won in a single campaign.

When Wes Morgan and Jonny Evans clattered into Anthony Martial, it resulted in United’s 14th penalty of the season, surpassing the record held by Crystal Palace in 2004/05 and the 2015/16 title-winning Leicester City side, both of whom won 13 penalties.

Bruno Fernandes converted the spot kick, his fourth of the season, to make it ten penalties scored by United this year. That’s one behind the record, held by that Palace team and Chelsea in 2009/10. Incidentally, it was also the eighth penalty conceded by Leicester this season, the most of any team in the league.

8. Bruno Fernandes has been directly involved in more goals since the Premier League restart than any other player (15).

Every time someone got near Thierry Henry’s record of 20 assists in a single season, they always faded towards the end of the campaign. Cesc Fabregas, Mesut Özil, Kevin De Bruyne; they all looked odds-on to do it, but it fell away from them just as it was in reach.

But the Belgian finally did it on Sunday, reaching that mythical number against Norwich City by setting up Raheem Sterling’s goal during the 5-0 win. The midfielder was evidently desperate to do so, making a season-high ten key passes during the match.

But of course, we all know that his ghost assist against Arsenal should have stood and he that he should be the sole record holder with 21 assists right now.

100 – Kevin De Bruyne's most recent assist, against Watford, was his 100th in Europe's top five leagues since leaving Genk prior to the 2012-13 season. In this time, he is surpassed only by Lionel Messi (112). Warlock. pic.twitter.com/L2Ipk6OW0o

99 problems but a title ain’t one

After coming so agonisingly close to winning the title last year, many predicted they might have to do even better the next season to actually win the Premier League. They didn’t have to in the end, finishing 18 points ahead of their nearest rival, but they surpassed it anyway.

By accumulating 99 points, Liverpool became just the second team in English football history to reach that amount; Man City are the other, having reached 100 points in 2017/18.

⬆️⬆️↔️ Of the 17 teams that have appeared in each of the last 2 PL seasons, 6 teams improved their points tally, 10 had a lower total & 1 (Man Utd) stayed the same pic.twitter.com/q2sGXzbksl

Five things we learned from the Premier League’s final day

Danny Ings missed out on the Golden Boot award by a goal, but it’s been a stellar season for the English striker who scored 22 goals in the Premier League this past season.

Take away penalty goals, however, and Ings is the king of all he purveys. His 21 non-penalty goals are the highest tally of any player in Europe’s top five leagues when spot kicks are removed from the equation. Only Jamie Vardy and Pierre-Emerick Aubameyang (both 19) come even close to that, while he’s also way ahead of the likes of Lionel Messi (18), Kylian Mbappe (18), Cristiano Ronaldo (17) and Mo Salah (16).

Ings has also scored in 20 different matches this season, the most of any Saints player in the competition’s history. His latest goal came against Sheffield United, denying Dean Henderson a 14th clean sheet of the campaign. However, only Bobby Mimms (19) and David Seaman (15), both in 1992/93, have kept more in their debut Premier League campaign among English goalkeepers.

⚽️ With 22 goals, Danny Ings is the PL's joint 2nd top scorer – in each of the previous 3 seasons, Southampton's top scorer in PL registered only 7 goals pic.twitter.com/27lUE25zX2

The five PL clubs who have suffered relegation most often

Poor Palace crawl over the line

Following their 1-1 draw with Tottenham Hotspur, Crystal Palace became the eighth team to go an entire season without scoring more than twice in a match, but they are the first team to do so and not be relegated.

It’s a good thing the Eagles were virtually safe before the restart, because their form since then has been abysmal; they have lost seven of their nine matches, giving them the second worst run in the league since football returned.

Roy Hodgson only recently signed a new contract with Palace to keep him at the club next season, but rumours are abound that the south London outfit are interested in Burnley’s Sean Dyche. There have been mumblings that Dyche is unsettled at the club, so there might be something in the rumours.

Read: Jack Charlton was more than a football man, he was a cultural touchstone

See Also: The definitive list of the 15 most iconic football jerseys of the 90’s