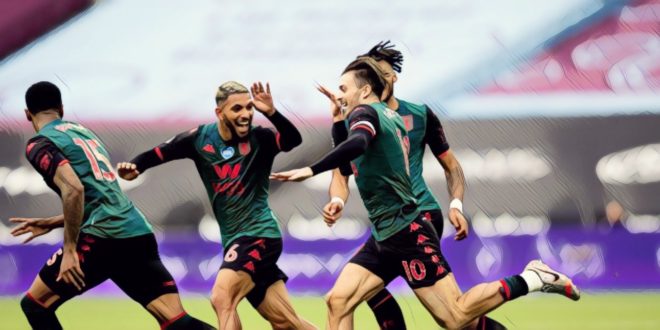 A memorable and poignant Premier League season came to a dramatic conclusion this weekend with European places and relegation slots finally confirmed in a crescendo of joy and despair in equal measure.

Here is a look at five things we learned from the best of the action.

Jack Grealish steps up to keep Aston Villa in the bigtime

Aston Villa went into their final game of the 2019/20 season knowing that in theory, they could have won their game and still been relegated from the top flight. Such was the pressure on Dean Smith’s men, they needed their top players to step up and deliver a moment of inspiration and they got just what they needed from their home-grown number 10.

Jack Grealish came to life at precisely the right moment. His powerful effort from the edge of the area was about as big a goal as he is likely to score in Villa colours. It was tenth of the season in all competitions and was enough to secure Villa a priceless point that ensures Premier League football at Villa Park next season.

Grealish may well divide opinion but this was a real big game moment that hints at a steely mentality for the Birmingham-born midfielder, and if as expected it was his final contribution for his boyhood club it was a marvellous way to bow out.

👶 Been at the club since 6 years old.

🎓 Given the captain’s armband.

📈 Led them to @PremierLeague promotion.

⚽️ Goal on the final day to save them from relegation.

😢 Likely to be his final ever game.

Given Chelsea still needed something from their tricky final game of the season at home to Wolves, the absence of regular number one Kepa Arrizabalaga from the starting XI must have drawn some eyebrows. The world’s most expensive keeper was beaten five times at Anfield on Wednesday night and that must have been evidence enough for his manager to give 38-year-old Willy Caballero the nod for such a crunch game.

-11 – Based on Opta’s expected goals on target data (xGoT), this season, Kepa Arrizabalaga has conceded 11 Premier League goals more than the model would expect the ‘average’ goalkeeper to concede; the worst figure of any goalkeeper in the division. Worrying. pic.twitter.com/Ds9fcWEiJ5

Lampard acknowledged that his number had been experiencing “some difficult times” recently and was hooked from the starling line up at the manager’s call. However, it is not the first time this season that Kepa has been dropped and his form has remained patchy at best for most of 2019/20.

With the summer break beckoning for Chelsea it will interesting to see whether Lampard opts to stick or twist with his goalkeeping personnel ahead of the new season. An upgrade may well be required if Chelsea are to go the next level under Lampard.

When Bruno Fernandes made his Manchester United debut back in February, his side were 14 points off Leicester City who sat proudly in third place. With a dash of Portuguese brilliance as well as some considerable efforts from an increasingly confident front three, United had clawed back that deficit until they required only a point from their final match of the season, away at Leicester, in order to seal their place in the top four ahead of Brendan Rodger’s men. Solskjaer’s side, patchy in their previous two matches, were on the back foot for much of the first half, however, they showed their ability to dig deep and show character to secure a tightly contested 2-0 victory.

It was a huge result that extended their unbeaten league run to 14 Premier League matches and secures their place at Europe’s top table for only the second time in five seasons. With Champions League football now secured, United can look to reinforce a talented young team in the summer and build on a promising platform next term.

The gamble to sack Nigel Pearson and produce a new manager bounce failed miserably at home to Manchester City as interim boss Hayden Mullins saw his Watford side trounced and overrun against Man City on Tuesday night. 33 minutes into their clash with Arsenal and another thrashing looked to be fully on the cards.

Watford had conceded with the first three shots on target they faced and looked a dejected, sorry outfit for most of the first half. Captain Troy Deeney did inspire a fightback of sorts after his thumping penalty gave them something to hold onto in the game. However, a 3-2 defeat confirmed their fate and they now look dangerously in peril as they head into the second tier in a state of complete disarray.

Troy Deeney says Watford’s relegation is ‘heartbreaking’ after their 3-2 loss to Arsenal and looks at what the club can do to bounce back. pic.twitter.com/0lgQerfSoD

Beleaguered Everton fans may well have expected a reversal in their final match of the season. Their team’s disappointing season fizzled out week’s ago and they were left to sign off against a Bournemouth team, fighting for their lives on the final day.

However, a limp 1-3 defeat to a relegated side left Carlo Ancelotti beaten at home for the first time as Everton manager. For most of the proceedings, his side were pegged back and despite enjoying 70% possession, failed to do much damage to one of the worst defences in the league.

Carlo Ancelotti has finished a league season in the bottom half of the table for the first time in his 25-year managerial career.

Worse still, Jordan Pickford’s failure to keep out a late, tame effort from Junior Stanislas presented yet more damming evidence that the England international goalkeeper is simply not good enough in the long-term for a team plotting a return to European football.

An overall record of just 13 wins and 44 goals in the league is mediocre in the extreme and Ancelotti now faces a major overhaul of an under-performing squad this summer.