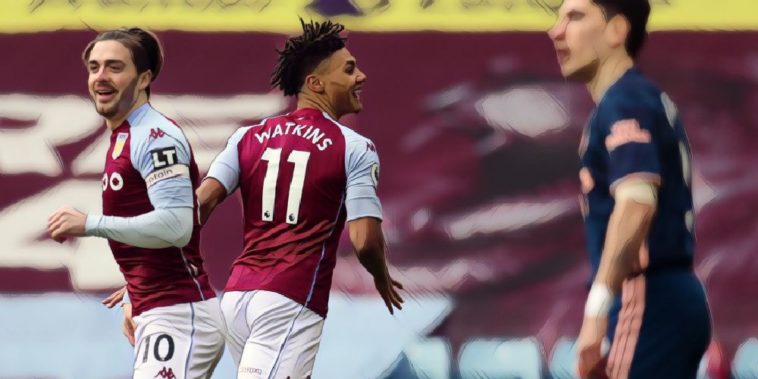 Arsenal boss Mikel Arteta admitted he was frustrated with his side’s mistakes, as an early Ollie Watkins goal secured a 1-0 win for Aston Villa at Villa Park.

The Gunners suffered a 2-1 defeat to Wolves in midweek and went into the match without David Luiz and Bernd Leno, the pair suspended having been sent off at Molineux.

The absence of usual stopper Leno handed Brighton loanee Mat Ryan his first start for the club, though the Australian international was quickly picking the ball out of the net, as Villa took the lead after just 74 seconds.

Former Chelsea youngster Bertrand Traore latched onto a poor pass from Cedric, before breezing past the returning Gabriel to tee up Ollie Watkins in the box, the Englishman’s deflected effort ending up in the back of the net.

The rest of the game saw the visitors control possession without ever looking particularly threatening, while Dean Smith’s side remained a real threat on the break, with Ryan forced into a number of key saves to deny Watkins, Jack Grealish and young Jacob Ramsey in the second half.

Arteta’s side saw a Nicolas Pepe effort curl wide, while new man Martin Odegaard blazed an effort over the bar late on, although, in truth, former Gunners ‘keeper Emi Martinez wasn’t overly troubled as he secured a second clean sheet against his old side.

Villa complete a PL double over Arsenal for the first time since 1992-93, under Ron Atkinson pic.twitter.com/PXRgAXF8SD

That result makes it back-to-back defeats for Arsenal, bringing a halt to their recent upturn in form. While Arteta appeared frustrated with the refereeing display, the Spaniard was unsurprisingly more concerned with the number of mistakes his side made.

“I’m extremely disappointed to lose and the way we lost it. We were the better team,” Arteta told BBC Sport.

“We controlled every department but we gave them the ball. We gave them another three big chances. Then when we had to score the goal, we didn’t find the right pass or the right shot.

“They were better in the boxes and that’s how you win games. We created enough opportunities. We didn’t score, we cannot win the game.

“We just gave them the ball, a moment you make a mistake and they punish you.

“You cannot win football matches if every week you do something like that. Four or five times we’ve played with 10 men. Against Wolves, we deserved to win both games by far but we lost both.

“[Red cards] cost us that game [against Wolves] – today other big decisions. Regardless of what the referee did today we should win the game comfortably.”

The Gunners are back in action again next weekend against Leeds United.