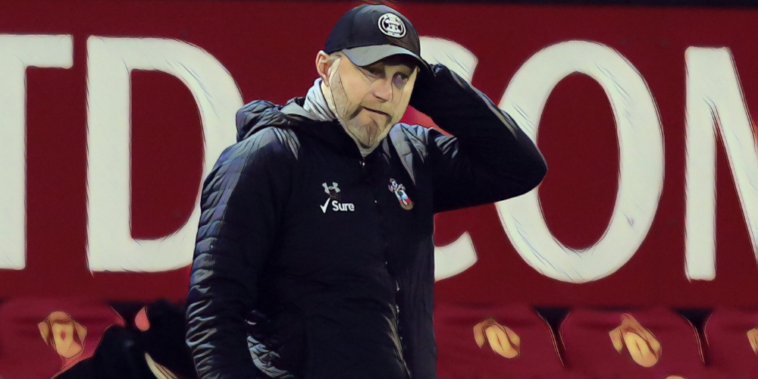 Southampton equalled the Premier League’s biggest ever defeat for the second successive season after a humiliating loss at Manchester United on Tuesday, a red card for debutant Alexandre Jankewitz after just 79 seconds setting the tone for an embarrassing evening.

Hasenhuttl’s side found themselves four goals down at the break and there was no relenting from the home side who pushed forward in search of more goals, Jan Bednarek’s dismissal seeing the Saints finish the contest with nine men and on the wrong end of a record scoreline.

The chastening defeat follows another 9-0 loss to Leicester during the 2019/20 season and Hasenhuttl admits the Saints were beaten in a ‘horrible way’ after a ‘long’ 90 minutes of action.

“We lost in a horrible way, and 90 minutes can be long in the Premier League. We couldn’t help them from outside. In the end, it’s a little bit of a different situation [to the 9-0 defeat by Leicester] because we are in a position in the table where we haven’t been for a long time.

“You don’t need this result to know what we need to do better.”

Hasenhuttl admits his side’s latest loss ‘hurts’ more than their reverse to Leicester last season, admitting the Saints have made progress since being thrashed by the Foxes and urging his side to prove they are a better team than they showed after an ‘unacceptable’ performance at Old Trafford.

“It’s not that it hurts less [than the last 9-0], the opposite, it hurts even more when you get this result again, but the team is a different one now. That’s the reason we’ve played a good season so far. Let’s see how the season ends, it will end better than the last I think.

“It hurts, but I can’t change it any more. It happened. The only way for us to go on is to show that we are a better team that we showed today.

“I can take this result in a different way because I know this team is working well, we have had fantastic games. When nights like this happen, when you are one man down after two minutes, what do you expect?

Hasenhuttl did, however, admit he had memories of the 9-0 defeat by Leicester in his mind as the game wore on, saying: “I’m sure it enters their [the players] minds. I cannot deny that I didn’t have it in my mind. It’s like this.”