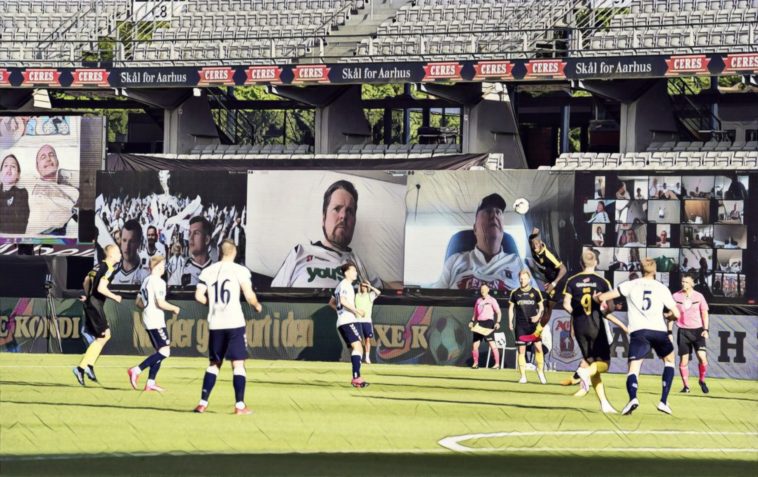 Watching football in front of empty stands is weird, isn’t it?

You don’t get the crowd reactions, both joyous and furious, to what happens on the pitch; you can hear the players talking and shouting far more clearly than you could previously; and the thud of the ball reverberating around the ground when it hits the woodwork is at once both cool and eerie.

It’s more akin to a kickabout with your mates than a high level football match, which feels so bizarre when the participants are being paid very handsomely for the privilege.

It is possible, though, that Premier League could fill the void of empty stadia with some alternatives. Although it couldn’t possibly replicate or replace the experience of going to matches in full grounds, it could make it a bit more enjoyable for us to watch at home.

How the Premier League could improve empty stadium atmosphere:

As we’ve seen most prominently with Bundesliga outfit Borussia Mönchengladbach, cardboard cutouts of supporters have been used to make empty stadiums feel a little less empty. And you know what? It doesn’t look bad. It’s a great way for fans to feel like they are a part of the event as well.

In their first home game back since the Bundesliga returned, Borussia Mönchengladbach played in front of 13,000 cardboard cutouts of supporters.

Each cutout costs $20 with proceeds going towards local causes. pic.twitter.com/MXfDDHpSCp

Clubs could even use it as an opportunity to replace some of the lost matchday revenue or donate it to much needed causes, just as Australia’s NRL have. The rugby association’s Fans in the Stand initiative allows fans to purchase a cardboard cutout of themselves – or Dominic Cummings – for $22 so they can ‘watch’ the match from the stands.

K-League club FC Seoul used sex dolls to make the stands look less empty. After outrage from fans, the club apologized for using the ‘mannequins’, claiming that the dolls were ordered after a ‘misunderstanding’ with the supplier.

Denmark this week became the second country in Western Europe after Germany to welcome back professional football, as AGF Aarhus hosted Randers on Thursday evening. But the match became famous all over the world after the home club ‘hosted’ fans on the sideline via Zoom.

A giant screen measuring 40m long and 3m high was placed in front of one of the stands in Ceres Park, filled with fans watching through the video conferencing app. The fans were even able to choose their own spot in the virtual stand, with some choosing to head to their usual section.

There is no method of piping in sound from the fans in attendance, which would likely just come through as white noise anyway, but West Ham United are apparently looking into doing something similar to Aarhus at the London Stadium.

As far back as mid-April the Premier League have been toying with the idea of pumping artificial crowd noise into the stadium in order to create atmosphere in lieu of cheering fans.

Although Spurs were accused of using recorded chants to increase the noise levels at their stadium last year, it would be a first for football to replace the noise generated by fans with something artificial altogether.

The Bundesliga are currently providing two different feeds to broadcasters: an unvarnished version and one with crowd noise added in as events happen on the field by someone with a soundboard. Fox Sport in the US have chosen the latter and the reaction has been mixed; some like it, some don’t.

Premier League Productions have reportedly voted in favour of canned applause for overseas broadcasts, although the company’s decision has no bearing on what happens on domestic broadcasts.

Brighton & Hove Albion chief executive Paul Barber intimated to The Times last month that it was something the club were considering:

“Could we look at noise being brought into the stadium in some way, but is that really what the fans at home would want and is that what the broadcasters would want?

“It would be strange, and football but not quite as we know it, but if that is the only way then of course we have to get on with it.”

Japanese firm Yamaha have developed the Remote Cheerer system, a smartphone app that will allow fans following J-League matches to cheer on their team via their phone in realtime, “their voices reverberating around the stadium in real time via loudspeakers.”

Perhaps it could be the way forward for the Premier League.

It’s an idea that’s been touted for live concerts and film screenings, but drive-in cinemas could be the answer to recreating at least something approaching the sense of community and camaraderie that fans experience attending games.

It will never replace the real thing, and measures would have to be in place to make sure that spectators don’t break social distancing rules, but judging by the images from the Czech Republic where it has been tried out, it looks like it could be a lot of fun.

Viktoria Plzen fans at a drive-in cinema to watch their team's game against Sparta Prague. Football resumed in Czech Republic after a two-month shutdown 🇨🇿 pic.twitter.com/LOesqGAXY8

Bring back the Highbury Mural

It won’t happen, but it would be hilarious if at least one club tried to recreate the infamous Highbury mural that Arsenal erected while their North Bank Stand was being constructed.

Criticised for not including enough black people and depicting kids sitting next to adults who did not appear to be their parents – saris, burkas and even four nuns were laterly added to it pic.twitter.com/4GjxaeKSD2