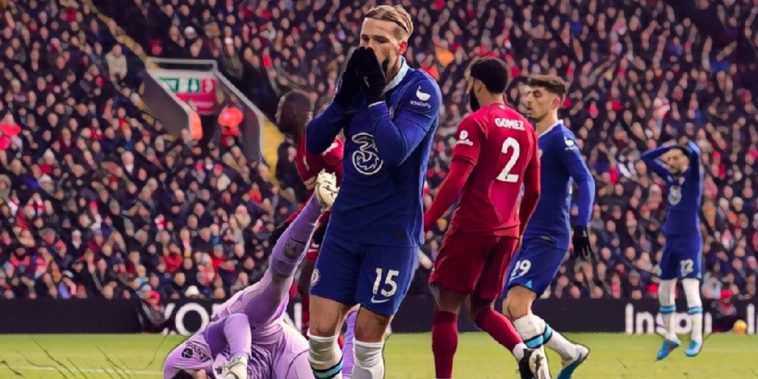 Graham Potter saw Chelsea’s 0-0 draw with Liverpool as a ‘positive’ point despite a result  that helped neither side.

For so many years, this fixture has seen two of the Premier League‘s biggest sides slogging it out at the top end of the division and competing for the game’s biggest honours, though both came into this one in mid-table following a season of struggle.

Liverpool looked much better in their FA Cup replay victory over Wolves in midweek, and Jurgen Klopp opted to stick with the vast majority of that side that won at Molineux, with Thiago Alcantara once again being joined in midfield by Naby Keita and youngster Stefan Bajcetic.

Chelsea thought that they had got off to the most perfect start after they had the ball in the back of the net within the first three minutes, only for VAR to spot a marginal offside as Kai Havertz followed up Thiago Silva’s effort off the post.

However, it was a game that was sorely lacking in quality, with the rest of the first half passing by with very few presentable chances for either side.

Liverpool came out with a bit more intensity after the break, though were still unable to find a way through, while Mykhailo Mudryk looked lively for Chelsea having been brought on for his Blues debut in the second half.

Ultimately though, both sides lacked the quality in their chance creation and in front of goal, with the 0-0 draw leaving Chelsea nine points adrift of the Champions League places having played a game more than Newcastle.

16 – Since his first season in the Premier League in 2019-20, no manager has overseen more goalless draws than Graham Potter (16). Margins. pic.twitter.com/iYoVxJCWzm

Speaking after the game though, Chelsea boss Graham Potter said he was ‘happy’ with his team’s performance, and thought it was a ‘positive day’.

“I thought the performance was good. Happy with the team, the energy, what we tried to do. At Anfield, it is always tough. It is a clean sheet and a point, we move forward.

“First half, we were decent, unlucky not to get the goal,” he told BT Sport. “It is what it is.

“They started the second half well, and we adjusted a couple of things and gained control, had a couple of chances. Overall, a positive day, apart from the fact we wanted three points.”

Thiago Silva was named as man of the match, and Potter praised the veteran defender’s influence alongside January signing Benoit Badiashille.

“He’s helping Benoit, it is his second game in the Premier League,” he said. “To have Thiago alongside him is a big help. He’s an important player, a leader, it is nice that he is enjoying his football.”

Mykhailo Mudryk looked lively after being introduced in the 55th minute following his £88 million move from Shakhtar Donetsk, the 22-year-old’s last game coming back in late November.

“He’s not played football for a while,” he said of the Ukrainian. “He’s been on a mid-season break. We had to manage his minutes, but you can see his quality.”