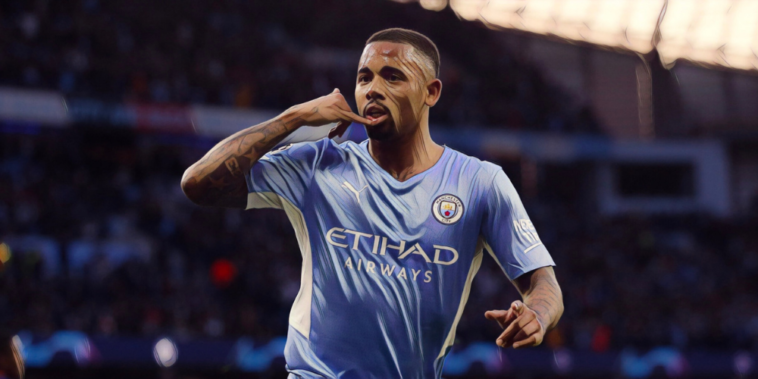 Among the crucial factors in Arsenal missing out on Champions League football was their lack of a natural goal-scoring forward. In contrast to their rivals Tottenham Hostpur, who boast two of the most lethal finishers in the league, the Gunners lack prolific goal-scorers within their attacking line. As such, they have been linked to a number of strikers in the summer window, foremost among them being Manchester City’s Gabriel Jesus.

Mikel Arteta has settled on the 4-2-3-1 as his preferred setup for Arsenal, with an attacking line featuring Bukayo Saka on the right, Martin Odegaard as a ten, one of Emile Smith Rowe and Gabriel Martinelli on the left, and either Alexandre Lacazette or Eddie Nketiah leading the line. The three players behind the striker have thoroughly impressed this season. Saka in particular is fast becoming one of the most exciting players in the Premier League, while Odegaard is a brilliant creative playmaker who complements the pace, trickery, and dynamism of his fellow attackers well.

The problems lie at the top of the pitch. Lacazette was repurposed as a somewhat unorthodox striker, tasked with dropping deep to link play, leading Arsenal’s high press, and making selfless runs in the attacking third which drag opposition players out of position and create space for the likes of Saka, Martinelli, and Smith Rowe. While he performed reasonably well in this role, especially in his pressing, it came at the cost of his goal-scoring threat.

This is partly a function of his role: as Arteta gave the departing Lacazette more responsibilities outside goal-scoring, the Frenchman’s limited reserves of attention and energy are more depleted and hinder his finishing. However, the rate at which his goal-scoring has dropped is alarming. He scored an abysmal 0.10 non-penalty goals per 90 in the Premier League this season, placing him in the second percentile among strikers in Europe’s top five leagues according to FBRef. Such a return simply cannot be sustained if Arsenal wish to achieve Champions League football.

Towards the latter stage of the season, this is why Nketiah began to receive more game time. At 23-years-old, he has far more stamina to perform the wide array of duties Arteta tasks him with. His goal-scoring was impressive in the last few games of the season, but the trouble for Arsenal is that he has never shown he can sustain such finishing during the course of a league campaign. His previous prolonged runs in the side have been marred by disappointing scoring returns. Furthermore, his movement and creativity is less suited to playing as a well-rounded forward in the mould that Arteta wants.

It is within this context that the club’s interest in Jesus makes sense. For years at Manchester City, the Brazilian has thrived across the front line and been an instrumental part of Pep Guardiola’s attacking rotation. His role has always been fluid, meaning he is comfortable dropping off, pulling wide, or pushing up depending on his starting position and the movement of his teammates. While he was previously criticized for a substandard goal-scoring return, his 0.44 non-penalty goals per 90 from 0.44 npxG is impressive, particularly in the context of his other abilities.

Jesus’ passing is sharp and creative, capable of influencing the game both from dropping very deep to move the team up the pitch or play intricate one-twos and through-balls in and around the penalty area. He’s also comfortable with both feet, making him harder to predict and defend when feeding teammates.

His ball-carrying is even better. While not an especially physically imposing forward, Jesus is robustly built and can ride opposition challenges with ease with his strength. His close control and trickery mean he can be a dribbling threat from a range of situations. Whether in transition, one-on-one against a defender, coming deep to receive and carry forwards, or spinning in behind with his back initially facing goal, he can influence the game in multiple phases with his dribbling ability.

Perhaps the most important trait Jesus exhibits is his work-rate. Whether his team is in or out of possession, the Brazilian is a relentless force and a hassle for opposition backlines to cope with. His movement is incessant and constant, often making selfless runs to create space for teammates or trying to pose as a progressive passing option for his teammates. He presses with intelligence and intensity, curving his runs to mark passing lanes and harrying opponents when in possession.

For Arsenal, there could not be a better fit for the profile of striker Arteta desires than Jesus. He is a better presser and creative presence than Lacazette while also being a better goal-scorer. His established relationship with Arteta and the similarity in his roles at City and the Gunners would also ease himself into the squad.

At 25-years-old, he provides an inexperienced attacking line a valuable level of leadership and know-how while still being in his prime. With the arrivals of Julian Alvarez and Erling Haaland, Jesus’ game-time will be further reduced at City. Arsenal would do well to take advantage of his predicament and add Gabriel Jesus to their youthful, exuberent, and exciting attacking options.